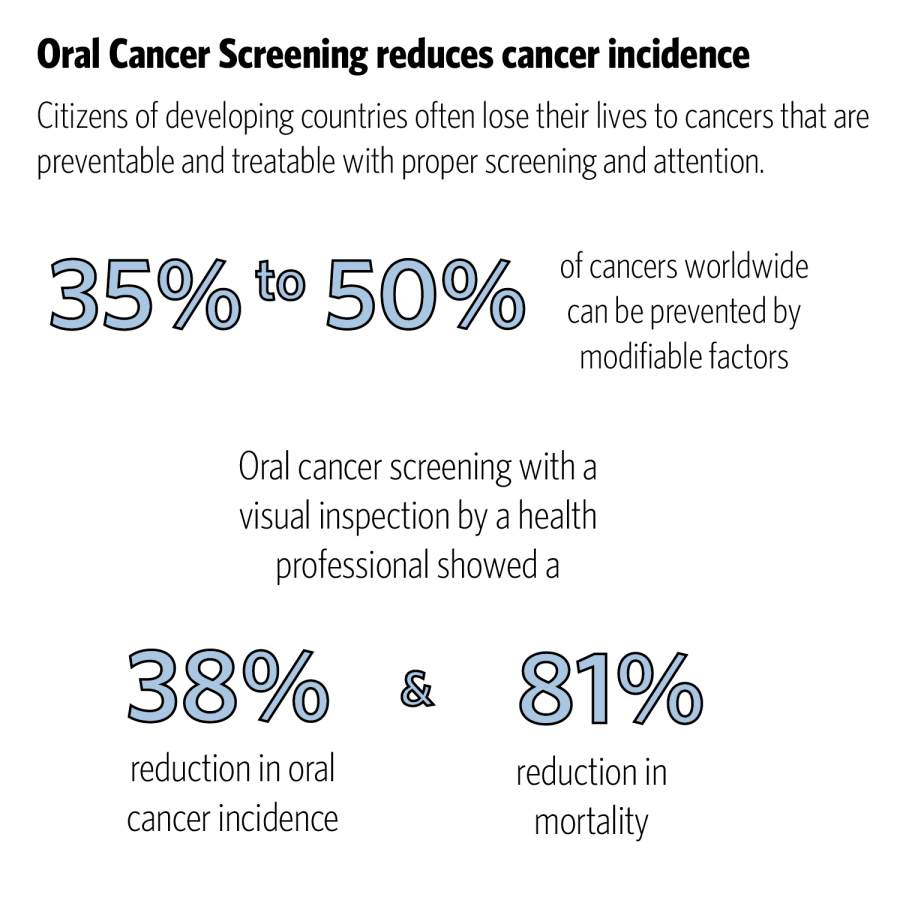 Aashay Patel, senior in Engineering and co-founder of Vitrix Health, said the startup was inspired by developing countries where oral cancer is prevalent. Patel said oral cancer screening is a simple technology that is artificially made too expensive for poorer regions to access.

“I recognized that this technology did not need to be that expensive,” Patel said. “I realized that if I stripped off the bells and whistles to the core functionality of the product, then I could make it for a lot cheaper.”

Ayush Kumar, senior in Engineering and co-founder of Vitrix Health, said traditional business models look at people as customers, a practice that cannot be applied to poorer communities.

“We came up with a business model so that the cost and the burden of who pays for this technology is not put onto the people who have the least amount of money and really need it,” Kumar said.

Patel said while he and Kumar could make a greater profit in European and American markets, the two are driven by a moral business model, which he calls “business for the people.”

Patel and Kumar said it is their responsibility as first-generation immigrants to give back to communities in which they find their roots.

Oral cancer rates are not improving in developing nations. According to a study done by the Journal of the Egyptian National Cancer Institute, preventable cancer in India is expected to reach 1.75 million cases by 2020, while there were an estimated 1.45 million cases in 2016.

Patel said oral cancer technology is simple because the mouth is an easy area of the body to access.

“This technology is mobile, and a minimally trained worker can take it village to village and screen people so that we can tell someone that hey, it’s time to get a biopsy,” Patel said.

“We are trying to catch this at stages one or two instead of stages three or four,” Kumar said. “Almost everyone knows someone who has been personally affected by cancer, and we always wish, whether it was oral or not, that we could’ve caught it a little quicker.”

Vitrix Health has sent Dr. Sue Mantel to Argentina to run clinical trials of the oral cancer screening technology. Vitrix Health’s partnership in Argentina originated in a connection made through contacts in the Gies College of Business.

“Argentina is similar to India in terms of incidence rate being pretty high in oral cancer,” Kumar said. “We were in the right place at the right time with the right people and a great product.”

Although Vitrix Health has received funding from multiple sources, initial funding came from a micro-grant awarded by Founders, a student-run entrepreneurial organization for University startups.

Matt Rastovac, junior in Engineering and co-president of Founders, said when Vitrix was in need of resources, Founders was happy to supply them.

“We look a lot at passion, the team experience and general viability of an idea and decide if we think a startup can succeed, and we thought Vitrix could,” Rastovac said.

Rastovac estimates less than 10 percent of University startups make it to the clinical trial stage Vitrix is currently in.

“Vitrix has the background and the connections needed to help a huge population of people by bringing very cheap and very modern healthcare to places in need,” he said.