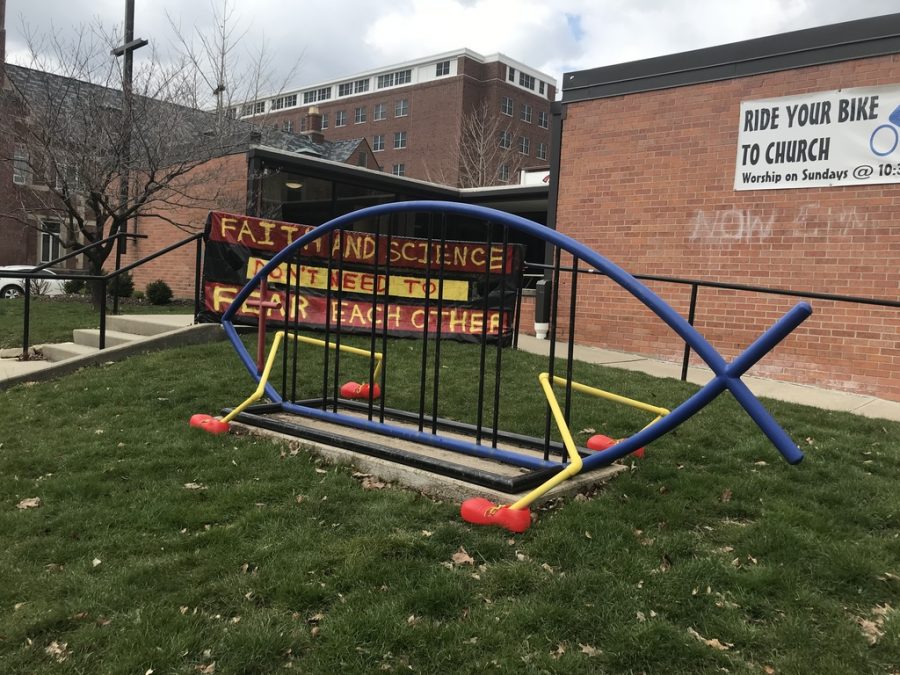 The bike rack in front of St. Andrew's Lutheran Church recently added Darwin feet to the bottom of the rack.

The bike rack in front of St. Andrew’s Lutheran Campus Center added Darwin feet, a symbol representing the theological perspective of evolution, to signify that faith and science can be mutually respectful.

“We are attempting to sort of challenge the popular narrative that says that faith and science are not compatible,” said Amy Thoren, pastor and director of St. Andrew’s.

The original shape of the rack was the Christian fish, which is an ancient Christian symbol.

The new enhancement was designed by a student and built by a group of about five students and two other members, Thoren said.

She said she and many others have seen bumper stickers or signs where the Christian fish is eating Darwin or vise versa, so they want to portray that it is possible to be both religious and involved with science.

The students are the ones who are really driving this conversation and who are concerned about having these conversations, she said.

“This is something that students themselves are really taking the initiative to accomplish,” Thoren said.

St. Andrew’s often holds bi-annual discussions called Rheticus Forums, which encourage dialogue between science and religion, according to a press release from the church.

A discussion will be held at the church with Rob Saler, Lutheran theologian, about the love of science and being an atheist on April 17.

Another goal of adding the feet was to shock people a little bit, she said.

“Yes, we are a church, we are a place of faith where … it’s acceptable to add the feet on the Christian fish,” she said.

Thoren said she hopes people can challenge and learn from each other with this discussion, and the fish with the Darwin feet helps to represent that.

“We believe that for students to be well-rounded in their education, it’s really good for them to have conversations between the sciences as well as religion,” Thoren said.