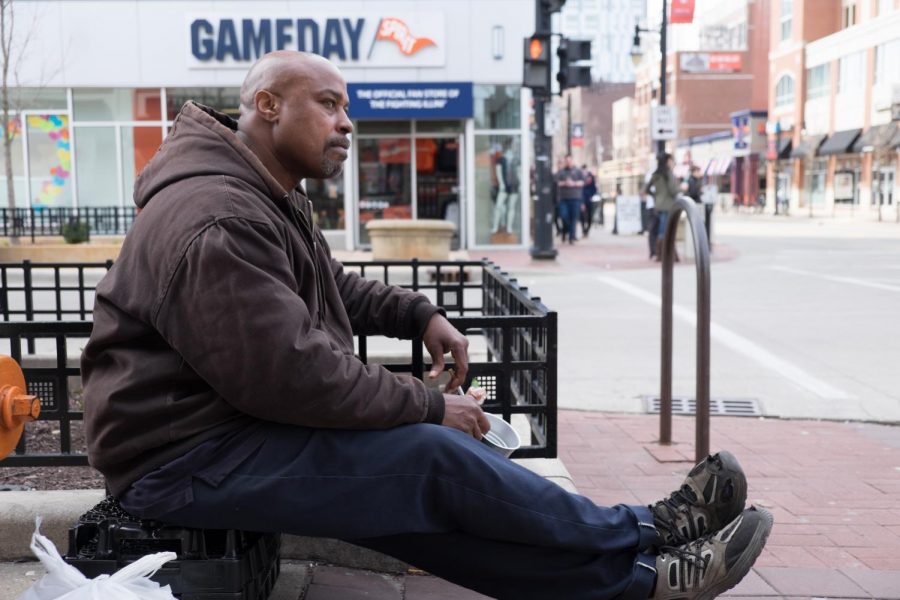 Kevin Love asks for spare change on the corner of Sixth and Green Streets on April 28, 2018.

The shelter is run on donations from the community, Palmer said. They opened Nov. 20 and closed March 31.

“We were supposed to close on Sunday, but we weren’t comfortable closing on Easter Sunday. So we stayed open, and our last morning was Monday,” Palmer said.

Austin’s Place was able to open earlier in the year and close later due to a larger amount of volunteers than there were last year. Stanhope said money is not the problem with not running year-around for Austin’s Place; it is the lack of volunteers available to run the shelter.

Even with the closing of overnight shelters, there are still facilities available for homeless people to receive help.

Dalhaus said the drop-in center is working with the C-U Men’s Shelter to establish a year-long, overnight shelter.

He said C-U at Home wants to establish the men’s shelter before they move on to a women’s shelter. The shelter would be available for men because of the large number of homeless men in the community.

“Obviously, we feel that they are both very important, but the need right now is for men, so we want to get that up and running,” Dalhaus said.

“I think it is such a huge need in our community; if you just look at the numbers that the men’s shelter we’re serving this year compared to last year, it’s almost double on an average night,” Dalhaus said. “So the need is great, and I’m just glad there are so many people in the community willing to have that discussion.”