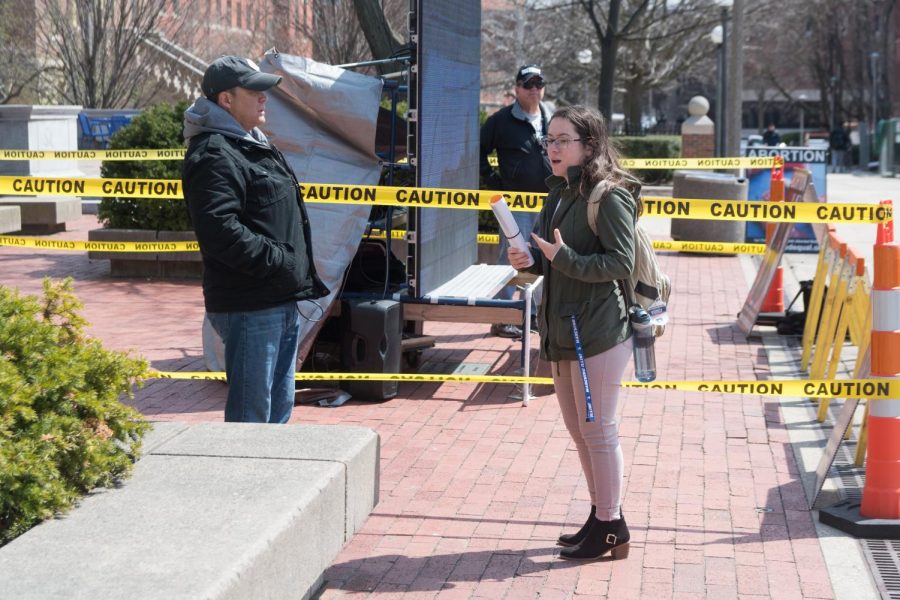 A University student challenges the pro-life activists’ methods during a protest outside the Illini Union on Wednesday.

Created Equal, a pro-life group leading a campus tour across 24 campuses, hosted an anti-abortion photo and video exhibition on the Main Quad on Wednesday. The exhibition included playing graphic videos on a JumboTron and displaying graphic photos.

The Illini Republicans sponsored Created Equal’s visit because the University only allows groups to come on the Quad if they are a part of a registered student organization, Jack Johnson, president of Illini Republicans, said.

“Hopefully people will start having a discussion either with their staff or with ours, or whoever may be around,” Johnson said. “Hopefully they’ll realize that maybe the rhetoric, that it’s just a clump of cells, isn’t completely true.”

Carol Li, sophomore in Business, says she had seen worse, but she felt uncomfortable with the images being prominent.

“Even though they have signs that say ‘caution,’ you can see (the images) from far away,” she said. “The sign’s, like, literally right here and maybe some people don’t want to see these things, but you can see them from probably the other side of the Quad, but you can’t see the caution sign from the other side.”

The group’s stated goal is to convince college students that abortion is an immoral form of age discrimination. Johnson said the graphics were beneficial because the seriousness of abortion cannot be put into words.

“That shows the gravity, the seriousness of the situation and how it’s disgusting and gross. So is abortion,” he said.

These images were displayed from 10 a.m. to 2 p.m. at the Quad Anniversary Plaza.

Mike Harrington, the national director of Created Equal, said those who were made uncomfortable by the images are proving the group’s point.

“We believe that to make genuine progress in the quest to protect every human life, we must get beyond finger-pointing and demonizing our opponents,” said weDignify in an email. “We interact with others by building common ground, listening to them and always upholding and affirming their dignity.”

WeDignify said there are some well-intentioned individuals and groups in the pro-life movement who take a different approach.

“They use shock tactics, graphic images and alienating language. We disagree with these tactics and think they are harmful to building a culture where all lives are dignified,” wrote weDignify.

Jack Badalanenti, freshman in LAS, said he can see an argument against abortion, but this does not change his opinion.

“I’m not really that disturbed by it or acknowledging that it’s disgusting,” he said. “But yeah, what they’re going for is to gross you out and show you the disgusting aspect of this that people sort of just toss around theoretically.”

Harrington said almost every social reform movement, such as the Civil Rights Movement, have used images like these to make their point.

“So we’re taking history and applying it to abortion,” Harrington said.