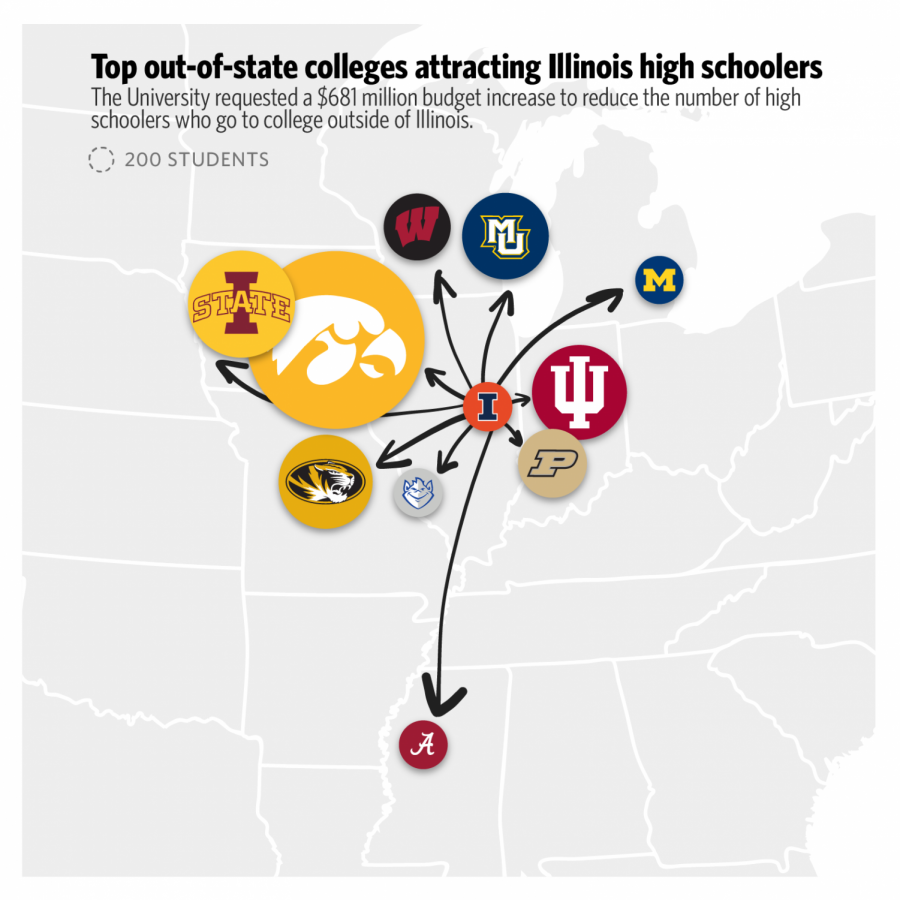 Source: Illinois Board of Higher Education

“We’re obviously concerned that lots of schools in competing states are trying to compete for Illinois students. We know that many times, they are trying to give them scholarships, grants, awards to make them seem on par with our costs,” said Dan Mann, interim associate provost for enrollment management. “We have chosen here to provide most of our financial aid as need-based financial aid instead of merit-based.”

As of 2016, universities in Iowa, Indiana, Missouri and Wisconsin have drawn the most Illinois students, with 1,690 Illinois residents attending the University of Iowa alone.

“Some of the lower-populated states just don’t have enough high school graduates within their state,” Mann said. “Iowa is an example of that, so they need to bring students from Illinois and other states to meet their enrollment goals.”

More than 70 percent of students enrolled at the University are Illinois residents, outpacing most other Big Ten universities.

“I have confidence that for some families, we may cost more to attend, but the return on investment far exceeds many other institutions they may be looking at,” Borst said, citing the University’s higher graduation rates, starting salaries and signing bonuses.

Borst said the University plans on receiving a freshman class of 7,500 students for fall 2018, which would constitute a record enrollment, in order to replace a relatively smaller graduating class, but it is not looking to further grow undergraduate enrollment beyond 2018.

Instead, Creasey said the University will be seeking to expand enrollment in online and graduate programs as part of the overall budget.

University President Timothy Killeen has spoken in front of the appropriations committees in the House and Senate to advocate for the budget request, emphasizing the University’s tuition freeze, student success and enrollment of Illinois residents.

Creasey said the tone among legislators has been markedly more positive than previous years after the two appropriations hearings.

“I have no idea (if the funding request will be approved),” Creasey said. “We’re coming off a pretty bad budget battle, so everyone’s kind of holding their breath to see what’s next.”