Nobody Is Above the Law rally planned for Champaign 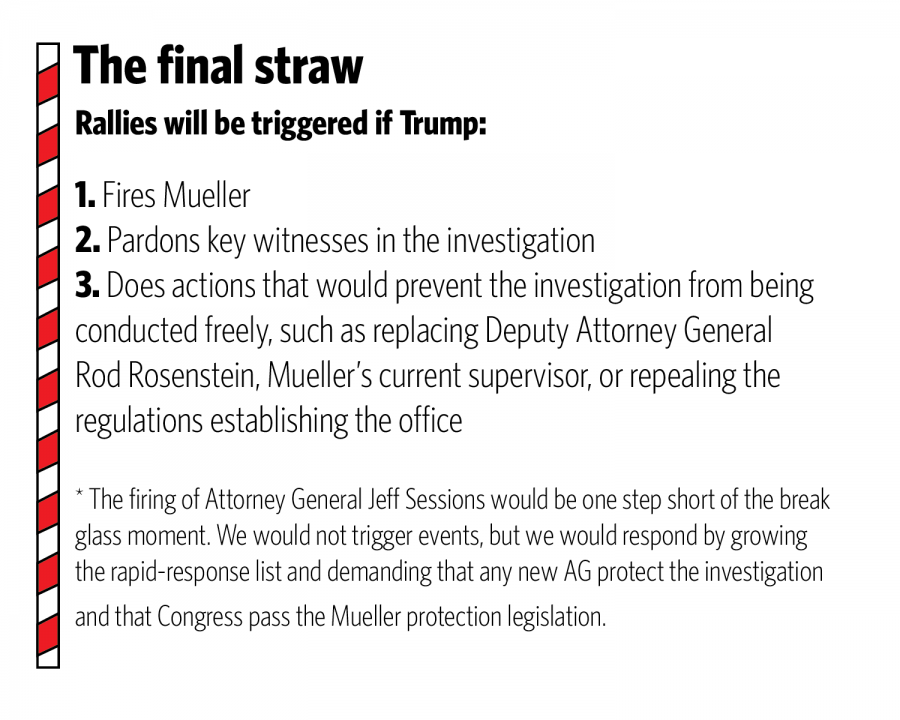 A rally would be triggered in Champaign as a series of rallies across the country, depending on President Donald Trump’s decision regarding the Russian investigation and Special Counsel Robert Mueller.

According to Nobody Is Above The Law, the organization planning the rallies, the rallies will occur  if Trump fires Mueller, pardons key witnesses in his investigation or takes actions that would prevent the special counsel investigation from being conducted.

Illini Democrats President Anusha Thotakura, sophomore in LAS, said protesting would be important to send a message to Congress to protest Trump’s decision to fire Mueller.

“They don’t necessarily make it all the way to the president’s ears, but I think what they can do is pressure our representatives and our senators to pass some concrete legislation to serve as a check (on the president),” Thotakura said.

Thotakura said the Illini Democrats would participate in the Nobody Is Above The Law rallies if they were to occur.

Vikram David Amar, dean of the College of Law, said it is good for people to express their voices. He said the rallies will send a statement, as long as the message gets through to the Republicans in Congress.

“Those folks have the right to march. It’s neither good nor bad,” said Mark Ballard, chairman of the Champaign Republicans, in an email. “Everyone has the right to express their outrage. As Republicans, we believe in their right to do so.”

Mueller’s investigation is focused on Russian interference in the 2016 presidential campaign, links found between Russia and the Trump administration, financial crimes committed by Trump and his associates and potential obstruction of justice.

Amar said Trump will face consequences, such as impeachment, if Republicans in Congress decide to pursue the investigation themselves or file impeachment charges in response to Trump firing Mueller.

Amar said the intent behind Trump’s decision would be the key factor in determining whether Trump had obstructed justice, if Trump were to fire Mueller.

However, Ballard said Trump has the right to fire him from a legal standpoint, but it would be better for him to let the investigation run its course and get to the exoneration by Mueller from a political standpoint.

Amar said there are three different approaches Trump can take to fire Mueller, including firing the U.S. deputy attorney general and replace him with someone who will fire Mueller, rescinding the regulations in place to protect Mueller from being fired, and disregarding all rules and simply firing Mueller.

“How the president fares depends really much less on the popular sentiment and/or the Democrats in Congress,” Amar said. “His fate is really tied to his ability to keep the Republicans in Congress from jumping ship.”