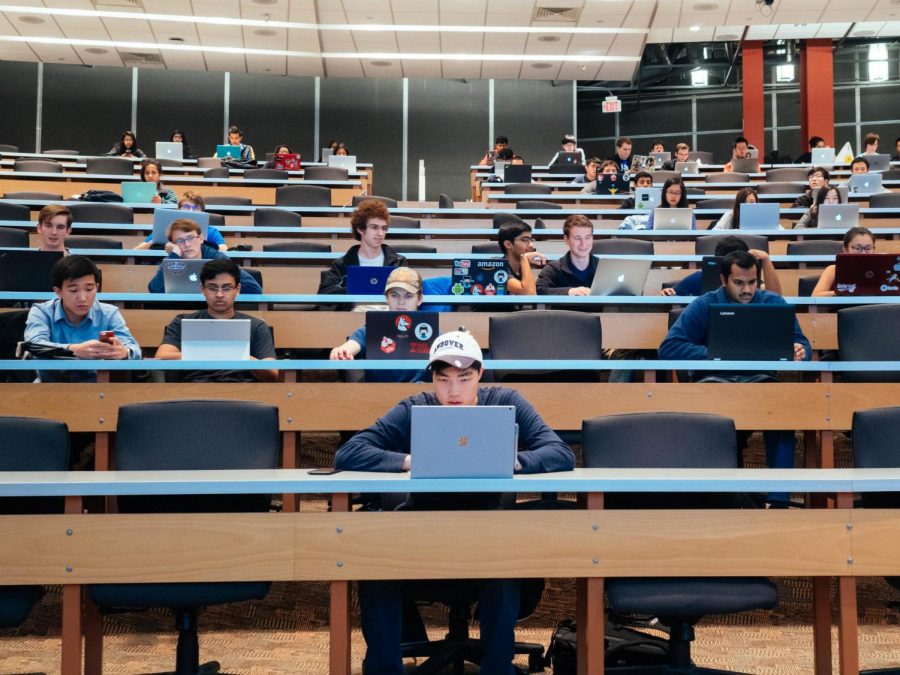 Students get ready for class at the Thomas M. Siebel Center for Computer Science. Several newly-graduated University alumni join Teach For America after graduation without the proper degree or experience.

Citing a declining student population, a low-income high school in Atlanta fired one of its four social studies teachers.

The next day, the school announced Jameson Brewer, a newly minted Teach For America corps member at the time, would be brought on staff.

Teach For America, a nonprofit organization that places college graduates in an intensive summer training program before sending “corps members” to teach in al in low-income communities across the country for a two-year time commitment, has come under increased scrutiny.

Brewer is now a professor in the College of Education at the University of North Georgia, a University alumnus and co-editor of two books critiquing Teach For America.

He said shunting aside veteran teachers — as he believes happened in Atlanta — is only one of the corrosive effects the organization has on schools and the teaching profession.

Unlike most new Teach For America corps members, Brewer had a degree in education and experience as a substitute teacher in Atlanta under his belt before joining the organization.

Following a statewide hiring freeze for new teachers in Georgia and the 2008 recession, Brewer said two years of limited employment options for teachers in the state had motivated him to apply to Teach For America.

Josh Hoen, vice president of external affairs for Teach For America, said interest in TFA may negatively correlate with how well the economy is doing and that the recently improving economy may be responsible for an application pool that has continuously shrunk in the past three years.

Brewer, however, said existential problems with the organization are to blame for declining interest.

“There are students who are left in the wake of this,” Brewer said. “What happens is students become guinea pigs of people who know nothing about teaching.”

“Imagine lawyers for America, or doctors for America, or pilots for America. It would be a ludicrous claim. No one would suffer the idea that somebody can, without any background or prior knowledge, become a lawyer, doctor or pilot in five weeks,” Brewer said. “The thing Teach For America gives our nation’s neediest students is exactly what they don’t need: People who are untrained, underqualified, uncommitted to education with no background, no experience or know-how.”

Though the length of the summer training institutes varies by region, Hoen said training at the Chicago Regional Institute lasts seven weeks, including one induction week and six weeks of pedagogical training and student teaching.

“We focus on recruiting really great people such that an intensive, short training program puts them in a position to be successful when they’re in the classroom,” Hoen said.

Michael Abello, University alumnus, principal of the Piccolo School of Excellence in Chicago and former Teach For America corps member, said the training corps members receive goes beyond the summer institute program. Instead, he attributes his own success to support he received from Teach For America throughout his initial two-year commitment.

However, Abello also said, “The reality is, the more training a teacher gets on the front end, the more prepared they’re going to be.”

According to Abello, nearly 100 percent of Piccolo students qualify for free or reduced lunch and many begin school performing below academic proficiency for their age group. During Abello’s four years as a principal, and following a 2012 turnaround effort managed by the Academy for Urban School Leadership, the number of graduating Piccolo eighth graders attending Level 1 high schools — some of the most high-achieving schools in Chicago — climbed from 9 percent in 2014 to 83 percent in 2017.

Though he graduated with a degree from the University’s College of Business, Abello said his experience teaching as a corps member led him to pursue a career in education.

“I loved going to work every day and the impact I had. The opportunity to be a leader in my classroom, in my community, in Chicago, really appealed to me,” Abello said. “We have the ability in education to change the trajectory for students who are in these communities.”

Brewer said Teach For America only intensifies the “revolving door of teachers” that often troubles high-poverty public schools, with the constant departure of veteran teachers sapping experience and effectiveness from low-income schools.

According to a study conducted by Brewer and other researchers, some memoranda of understanding signed between school districts and Teach For America required school districts to hire a given number of corps members. A Memorandum of Understanding signed between Atlanta Public Schools and Teach For America in 2012 stated, “School District shall hire every qualified teacher made available by TFA,” effectively guaranteeing every corps member a job within the district.

“In Chicago, there is not quotas,” Hoen said. “There’s a labor market for educators and Teach For America corps members are in that market with everybody else looking for a teaching job.”

The study also pointed to the quadrupling in the number of new Chicago corps members from 2008 to 2014 — a period of mass layoffs and budget cuts within Chicago Public Schools — calling it a counterpoint against claims corps members compete for jobs on equal footing with non-Teach For America teachers.

“In the policy realm, they’re taking jobs from veteran and traditionally certified teachers,” Brewer said. “There are many districts that are required to lay off teachers to make room for Teach For America contracts; in others, they’re not offering those jobs to otherwise certified or trained teachers.”

Abello said Teach For America helps fill teacher shortages in certain areas, such as special education, while also providing an avenue for corps members to become leaders in education, citing his own growth from a new college graduate unsure of his career path to a school principal.

Piccolo, also a site for a summer training institute, employs over a dozen Teach For America alumni teachers, according to Abello.

“I’ve had the opportunity to hire dozens and dozens of teachers and I do go back to Teach For America periodically depending on the positions I have available based on the quality of candidates that I’ve received in the past,” Abello said. “I’ve had really effective Teach For America corps member and really effective traditionally trained teachers.”