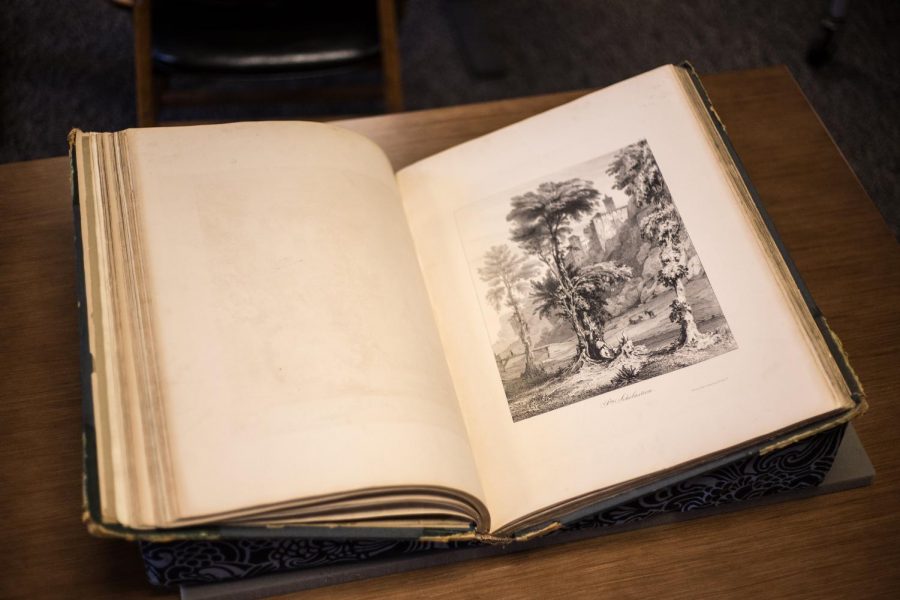 Sketches in Italy, a collection of picturesque sketches, at the Rare Book & Manuscript Library on July 9, 2018.

Robert Kindred pried open a first floor window in the Main Library with a crowbar.

It was close to midnight on a warm night in June 1980, and eight floors above Kindred, security measures protecting some of the library’s most valuable books were sparse.

Kindred made his way up to the eighth floor of the Main Stacks and began lowering books – each weighing 45 pounds and worth thousands of dollars – out the window down to his accomplice below.

Travis McDade, curator of rare law books in the College of Law, chronicled Kindred’s theft of rare books from the University and other colleges around the country in his most recent book, “Torn From Their Bindings: A Story of Art, Science, and Pillaging of American University Libraries.”

Kindred’s attempted theft of rare books from the University was cut short by a steam operator doing routine maintenance on the same night. After stumbling across three books, each the size of a tabletop, out of place on the library floor, he called the police.

The investigation of the theft by University librarians and police marked the beginning of the end of Kindred’s crime spree.

Kindred’s business revolved around stealing and framing antique prints, which McDade defines as etchings, engravings and lithographs mostly from the 19th century.

“The ones he stole from Illinois, the entire book was basically filled with these prints. So it would be 150 pages, entirely filled with etchings and engravings,” McDade said. “They were just these really, really impressive and rare pieces of artwork that just happened to be between the covers of a book.”

Security in university libraries decades ago was lax, making expensive books a vulnerable target for book thieves like Kindred, who would cut out antique prints, mostly of flora and fauna, out of rare books, frame them and sell them at around $150 apiece.

“The good thing about having gone through this time when people were stealing from libraries a lot is that libraries learn,” McDade said. “For the most part, the most valuable books are locked behind closed doors, in our case, the Rare Book and Manuscript Library.”

“Sketches in Italy,” one of the books the steam operator had found on the ground almost four decades ago, is stored in the rare book library today. Made in 1832, the book is filled with sketches and lithographs of the author’s tour through the Italian countryside.

“It’s like stealing a work of art,” McDade said. “Those books belong to us. We’re a land grant institution, we’re a taxpayer funded institution. If someone takes it only so he or she can sell it for money or have it for themselves, it’s not just taking from an individual person, it’s taking from all of us.”

McDade became interested in the thefts from college libraries in 2002, after discovering a note on an antique print he purchased, saying it had been recovered from a book theft from a university library.

He began work on “Torn From Their Bindings” in 2008, starting and stopping intermittently to write two other books also on the subject of rare book theft.

Though McDade’s research often centered around court and police records, he also interviewed librarians, police officers and Kindred himself, a rarity for McDade since many of the crimes he writes about often took place so long ago that most of the people involved were already deceased.

McDade said his interview with Kindred provided rich details about the beginnings of his career as an antique print dealer beyond the scant amount of information he was able to find in old newspapers and court records.

Kindred began dealing in antique prints while still a salesman at a company in southern California. He eventually quit his day job to steal, frame and resell antique prints full-time.

“It was sort of a surreal experience to talk to him, just because I had been researching the crime for so long, his name had been in my mind for so long and I had been reading these things about him,” McDade said. “It was weird to finally hear his voice, for one, and then hear his perspective on things, for another.”

McDade said Kindred spoke effusively about his childhood and his entry into the antique print business during his interview, but didn’t express regret for the crimes he committed decades ago.

“Knowing what I know about the people who steal from libraries, and that includes him, I would say they often view these things (antique prints) as unappreciated in libraries,” McDade said. “They think, ‘why can’t I just take them if no one’s looking at them?’ and that’s a nonsense justification for theft, but it’s a way a lot of these guys think.”