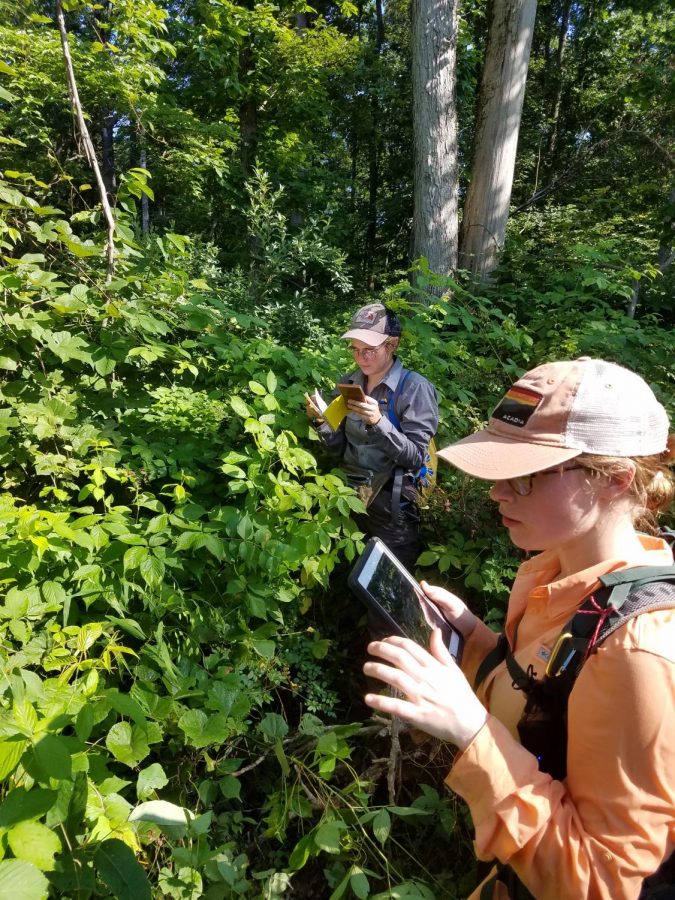 Graduate student Melissa Daniels and her technician Amanda Neibuhr survey a forest site hit by the 2017 tornado in southern Illinois.

It only takes one unforgiving windstorm to destroy thousands of century-old trees. Although it may seem like forests can regrow quickly, one University graduate student discovered the progress isn’t always positive in southern Illinois forests.

“When a forest is hit by a windstorm, it can cause gaps in the forest canopy called blowdowns,” said Melissa Daniels, graduate student in ACES. “Certain invasive plants can establish in the understory and prevent regrowth of the tree canopy.”

Daniels studied the impact of three wind disturbances on plants at Shawnee National Forest, Crab Orchard National Wildlife Refuge and Giant City State Park. For each site disturbed by the derecho, or a strong windstorm, in 2009 and tornadoes in 2006 and 2017, she surveyed a control site in an area of unaffected forest.

Although she has not done any formal data analysis, Daniels said one trend she’s seen so far is most of the windstorm-disturbed sites had more invasive plants than their unaffected matched site.

“In Shawnee National Forest, the 2017 sites seem to be more heavily invaded than the 2006 and 2009 sites, indicating that these sites are recovering along the ideal pathway in which tree canopy regrowth shades out invasive plants,” she said. “But the other sites seem to be fairly different.”

The graduate student found the sites at Crab Orchard and Giant City, which were both hit by the 2009 derecho and were much more heavily invaded than the control sites in Shawnee National Forest. Daniels said there may be a difference because Crab Orchard and Giant City planted invasive species for the purpose of building hedges and wildlife forage in the mid-1900s, although she hasn’t confirmed it yet.

“If that’s true, it could be one explanation for why those areas are so heavily invaded,” she said. “Collecting this data is important for making informed decisions about forest management.”

Daniels said it’s important for land managers to identify invasive plants so they can effectively treat the site of the windstorm. If shade tolerant invasive plants establish in the understory, they can spread into the surrounding forest and persist after canopy regrowth, she said.

“Southern Illinois is a bit of an unforgiving place, but it is incredibly beautiful, and there’s nothing else like it,” she said. “The presence of invasive plants after canopy regrowth would highlight the importance of monitoring invasive plants in blowdown areas to prevent spread to other areas.”