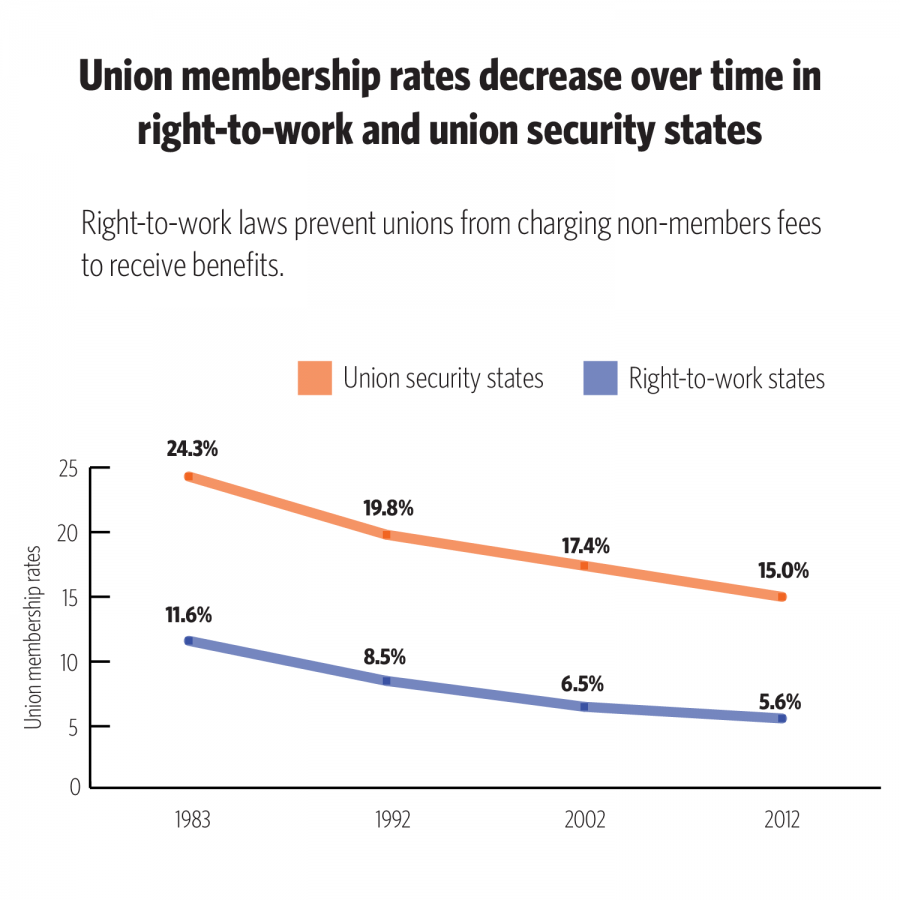 Two months after the Supreme Court ruling in the Janus v. AFSCME case, which was predicted to weaken public-sector unions, Graduate Employees’ Organization members say they are unshaken, but are bracing for more constraints on organized labor.

The Janus v. AFSCME ruling banned public-sector unions from charging fair-share fees. Fair-share fees are paid by workers who choose not to be part of the union, but who benefit from wage increases, representation in grievances and other services unions are legally required to provide.

They are effectively the same as “right-to-work” laws passed in 25 states. Allowing employees to opt out of paying union fees can create a free-rider problem where workers don’t pay for the costs of the union, but continue to receive the benefits, something that can decrease union membership and the political power unions hold.

Quan said the galvanizing effects of the strike are still reverberating around the union, driving interest and motivation among the GEO membership.

Bruce Kovanen, GEO co-president, believes the union membership rate has increased. According to Kovanen hundreds of members had signed cards during orientation week, while only a handful have dropped their memberships.

“I think that very much bucked the trend that a lot of people in national media or pundits thought would happen after Janus, where there would be this doomsday scenario where a ton of people are dropping membership, when in fact we’ve added a lot more than we’ve dropped,” he said.

However, Kovanen said the exact number of fair-share dues payers and union members the GEO lost after the Janus case won’t become available until September or October when membership cards are processed and compared with the number of people in the bargaining unit.

The deal GEO emerged with post-strike contained gains in health care and wages as well as guaranteed tuition waivers, something Quan said cemented the value of unionism to members.

The threat to guaranteed tuition waivers during contract negotiations scared and motivated Quan and other students. Tuition waivers reduce or eliminate tuition for graduate students working at the University, which are commonplace in graduate education.

“It was terrifying,” Quan said. “I couldn’t be a Ph.D. candidate if I was paying tuition. It’s that simple.”

Many members, whose first experience with the union was chanting and banging on upturned buckets on picket lines, continued their involvement after the strike, according to Kovanen.

Leftover energy from the strike could be serving as a tailwind behind the GEO as it navigates the shifting terrain wrought by the Janus decision.

“(The Janus ruling) is not a death sentence by any means,” said Dan Gilbert, professor in Labor and Employment Relations. “But unions need to be that much more proactive in going out and talking to workers about joining the union and continuing to be members of the union.”

Kovanen said the GEO plans on increasing transparency by undertaking a financial review and disseminating the information to general members, as well as increasing one-on-one contact with members.

According to Gilbert, efforts to constrain the power of unions haven’t ended, with anti-union organizations sending leaflets, knocking on doors and robocalling union members to encourage them to drop their union membership.

Although GEO members haven’t received any such messages yet, Kovanen believes it’s only a matter of time.

“I imagine in this environment, all unions are a target,” Kovanen said. “So it’s not a matter of if we will be, but when. That’s why it’s really important to be transparent about finances and be well organized.”

To prepare for a potential anti-union campaign targeted toward University graduate employees, Quan said he’s focused on making connections with individuals, emphasizing the effects of the strike and the GEO’s goals for the future with issue campaigns targeted toward health care, child care and a wage reopener on the horizon a year from now.

“Public employees in the U.S. and around the world have always had to figure out how to organize in not-so-favorable legal environments,” Gilbert said. “Janus makes it harder, but we have lots of examples from history and present day that shows that it’s still possible.”

Quan said when he spoke at the orientation for new math doctorate students about the GEO, a majority of the incoming class expressed interest, with around 20 signing membership cards.

“I’ve seen a big increase in energy and support for being involved in the union from a lot of different Ph.D.s, masters and graduate students who previously wouldn’t pay much attention, and I see Janus as part of that,” Quan said. “It’s disheartening, but it’s very clarifying. When things look bad it shows you what’s at stake.”