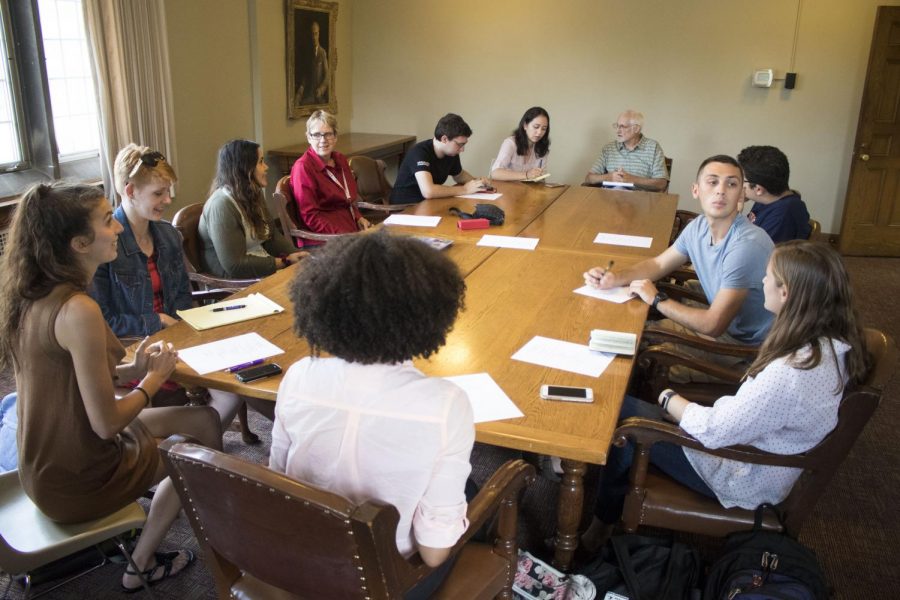 Representatives from different UIUC groups hold a meeting at the YMCA on Thursday to work together to increase the number of students registered to vote.

Naomi Canino, intern with Illinois Public Interest Research Group and junior in ACES, nervously approached students by the Alma Mater with a clipboard in hand last week, trying to register students to vote before the November midterms.

“It was a great time, but mainly students weren’t interested, and I think that’s because they were rushing to classes,” Canino said. “I joined PIRG because I felt like what they were doing in getting more students out to vote was a great thing I wanted to be a part of.”

Illinois PIRG is one of the many organizations injecting itself into campus life and attempting to get college students, well-known for having a low voting turnout rate, to register to vote before the November midterms.

According to Hadley Tuthill, campus organizer for Illinois PIRG, the organization registered around 2,000 students prior to the 2016 election. Canino thinks she registered 20 or 30 students during her clipboarding sessions.

In a meeting convened by the University YMCA, representatives from seven organizations gathered to discuss their strategies for boosting turnout in the November midterms, including hosting tables outside of residence halls, online voter registration tools and the nuts and bolts of how to efficiently register students to vote.

The People’s Agenda, a nonprofit progressive organization in Champaign, said it registered 2,030 students to vote on Quad Day this year and plans to continue doing door-to-door canvassing before the midterms.

“The student vote leans more democratic, so when some 40,000 students decide this is important, their voice matters and they decide they want to cast their vote, their impact is going to be felt all the way through the ballot,” said Aaron Ammons, Democratic candidate for Champaign County Clerk and founding member of The People’s Agenda.

According to Tuthill, PIRG wants to be a constant presence on campus in order to prod students toward the ballot box. She says she wants students to hear about registering to vote through PIRG’s announcements in lecture halls, posters in hallways, chalkings on the quads and PIRG’s posts on social media.

“Our generation, 18- to 24-year-olds will be the largest, most diverse group of potential voters, so they have a lot of ability to win elections, change elections and really take action,” Tuthill said.

“(College students) are a huge demographic in that district,” said Matt Grandone, Republican candidate for Champaign County Clerk. “It’s too big to ignore, that’s for sure. It’s not the end all be all, but it’s a big part of that district.”

Helping students decide whether to vote at their campus address or parents’ address was a focus for some organizations like the Illini Democrats and The People’s Agenda.

With the 13th Congressional District designated by the Democratic Congressional Campaign Committee as a “Red to Blue” district that national democrats believe can be flipped from republican to democrat, students’ votes could have more impact when they vote in Champaign rather than a relatively safe district.

With 58 percent of young voters identifying as democratic, democrats like Mike Ingram, candidate for Champaign County Board District Six, predict college students could be pivotal in deciding the outcome of the race.