The people behind independent living for students with disabilities 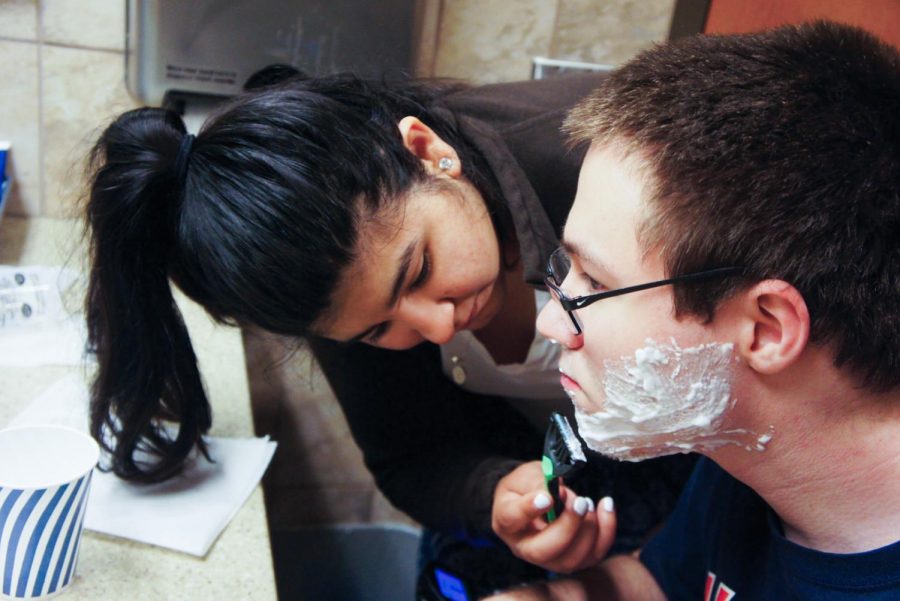 Charmaine Gutierrez helps Aaron Brannen shave his face during one of her morning shifts. Some students with disabilities on campus choose to hire their own personal assistants to help them with their daily tasks.

Every morning, as the sun hits his eyes, Aaron Brannen is ready to start his day. But there is one catch — he needs to wait for his personal assistant to help him out of bed.

Brannen, senior in Media and former Illini media employee, was diagnosed with cerebral palsy and has compromised motor skills due to complications at birth. Like many other students with disabilities on campus, Brannen relies on the help of his PAs to carry out many daily tasks.

Brannen currently has a team of five PAs, all students at the University. They help him get out of bed, get dressed, use the bathroom, shave, shower and any other needs he might have.

Alexis Halcomb, senior in FAA, has been Brannen’s PA for the last year and a half. The two went to high school together along with the same church.

Halcomb said in an email that while she never planned on taking on a part-time job in college, she agreed to help when Brannen reached out to her.

“It helps me stay responsible and keep an organized schedule,” she said. “I also believe it was also the right thing to do because I know if I was in his position, I would want someone who I was familiar with to help me with daily tasks over a stranger.”

Halcomb said it was extremely challenging to get the hang of the job at first, especially with tasks such as transferring Brannen in and out of his wheelchair and finding the willpower to wake up for a morning shift. But working with Brannen helped Halcomb learn about different types of accessibility facilities in buildings, rooms and other places on campus.

Halcomb said seeing the difficulties of getting around on campus using a wheelchair makes her more aware of the importance of accessibility as an element of spaces.

The job also brought the two long-time friends closer together. Halcomb said the two talk about their lives every day and give each other advice on the problems they face.

“We both can tell when either one of us is having a bad day, and just being able to talk about that with each other is great because we definitely spend more time together because of the hours I work, and I know we would both hate it to be awkwardly silent every day,” she said.

Brannen said he has close relationships with most of his PAs.

“You can’t really not get close to someone who gives you showers. You can’t not be friends with them,” he said.

Halcomb and Brannen are not the only pairs of friends who decided to give each other a helping hand. Chelsey Baker and Sandhya Dave, seniors in Education, became best friends when they met in class during their sophomore year.

A year ago, Baker hired Dave as her PA. The job never brought awkwardness to their friendship.

“We talked about it, and she agrees if it ever becomes that way, we would talk about it. It’s nice having a friend work with you, too, because the time you spent together is just even more,” Baker said.

Dave also agrees that the friendship makes the job easier since taking a shift is just hanging out with your best friend. Dave said she was the one who initiated the arrangement.

“I just have to know the difference between working and friendship, but it kind of just blends in and we never had an issue with it,” she said. “This worked out really well.”

Baker currently lives in Nugent Hall under the Beckwith Residential Support Services, a program designed to help students with physical disabilities perform basic activities of daily living. Her parents took care of her prior to coming to college, but she had to learn to build her own team with the support of Beckwith.

Baker said Beckwith has staff in place for freshmen who need support. The PAs provided by the program have already been through background checks and basic training, such as operating the lift and electrical devices installed in all the rooms at Beckwith, which help the residents move between the bathroom, bed and their wheelchairs without having the PA physically lift them.

“It’s really nice because a lot of us coming in freshman year are very new to having PAs, so it’s just a really nice support to have people already lined up,” Baker said.

However, Baker said the Beckwith program encourages residents to become more independent each year. Starting sophomore year, students can hire private PAs, meaning they are in charge of interviewing them, doing background checks, setting up payroll and teaching them how to use different equipment.

“It’s really preparing you to move out one day and be able to train your own staff,” Baker said.

Drew Richard, graduate student in Labor and Employment Relations, is also concerned with preparing for life after college. Richard uses a wheelchair due to spinal muscular atrophy and was a resident under the Beckwith program.

“It was kind of an interesting environment because it was almost like a hospital in a way, in the sense that there was always somebody around if my PA didn’t show up,” Richard said.

However, he chose to move into an apartment after he completed his undergraduate degree because he wanted to learn to live more independently.

“That was a nice place to start because it taught me the kind of things I need to be thinking about when I’m living on my own. But in a way, it was not a good environment because it made you feel comfortable and secure, and it didn’t really push you to gain a level of independence,” he said.

Richard said he came to the University when he was 18 years old. Having no experience and no idea what to do, he went through interviews and hired people to help him with his daily tasks.

“When I was 18, I put out my first job ad before I even came to school. It was a rough start, but it wasn’t the worst start. I mean, you gotta start somewhere,” he said.

Richard currently uses Facebook to build his team, posting the job availabilities for students at the University to see. Another platform available is the school’s virtual job board.

The job of a PA doesn’t tolerate irresponsibility. For students who have mobility issues, not many options are left when their PAs don’t show up for their shifts.

“Whenever she doesn’t show up for her shift, I have no way of getting out of bed,” Baker said. “That’s why this job is also very critical because if you don’t show up for your shift or you’re late, that’s someone waiting to go to the bathroom.”

Other than physical support, it is important to get the appropriate emotional support from their PAs as well, and Richard found the hires he made off of the job board often couldn’t provide that to him.

“The people I found there were not the type of people I typically vibed with. This type of job is different from other jobs, and I feel like to be a good PA, you need to know how to build a relationship and be a human with each other,” he said.