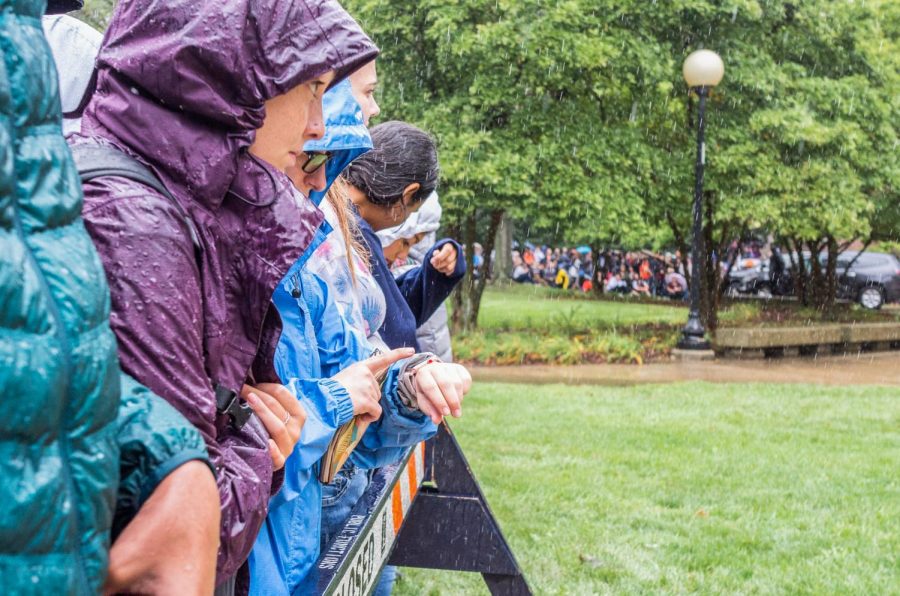 Students stand outside Foellinger Auditorium in the rain, waiting for former President Barack Obama to come out after his speech on Friday.

Though caught in a relentless downpour that left people completely drenched, students still stood outside Foellinger Auditorium on Friday in hopes of catching a glimpse of former President Barack Obama.

Obama visited the University to accept the Paul H. Douglas Award for Ethics in Government. Over 22,000 students across the UI System applied for a ticket to see him, but only a few over 900 were granted access.

Obama mainly used his platform to propagate democratic party ideals and implored students to vote in both local and national elections, even if they did not agree with his beliefs. For students like Diamond Arrington, freshman in FAA, hearing Obama speak was inspiring.

According to the United States Census Bureau, 18- to 29-year-old people have the lowest voter turnout rate, with less than 50 percent of that population voting in national elections. Some young people do not see the point in voting, while others see it as their greatest asset.

“If you see an issue or you don’t agree with something, yes, protest, yes, speak up about it, but your greatest voice is your vote,” Arrington said.

Obama appealed to the audience’s pathos by speaking directly to them about the power they hold when it comes to elections, particularly as younger generations now outnumber the baby boomers in population size.

“Near the end when he’s like, ‘I believe in you’ to, like, make the change or whatever, I thought he was looking right at me,” said Nick McCormick,  junior in Media. “That really stuck with me.”

Other students who were in the audience during Obama’s speech felt especially connected to his words when he mentioned national issues that directly affect them, such as immigration reform.

“My parents immigrated here illegally from Mexico, so when he talks about immigration, that’s pretty important to me,” said Everett Estrada, senior in Business. “He can inspire a room.”

Students who were not given a ticket to see Obama’s speech in person were invited to attend a livestream viewing at Huff Hall, but the attendance turned out to be dismal. However, the lack of audience members for the public livestream did not deter the spirit of excitement.

“I was expecting there to be a lot more people here (at Huff Hall),” said Sylvia Haas, senior in LAS. “If you got in (to Foellinger Auditorium), you would go no matter how you were feeling versus here it’s like the people wanted to be here.”

Many students were disappointed Obama was going to speak in Foellinger Auditorium over other nearby locations, such as the State Farm Center or Memorial Stadium, because it meant the vast majority of interested students would not be able to attend the event.

“There was such a disconnect watching it on the computer,” said Quinn O’Dowd, graduate student in LAS.

One of the main messages of Obama’s speech was to get out and vote, a topic some students found unsurprising.

“(The speech) wasn’t anything that struck my world,” O’Dowd said. “It was a lot of what I expected.”

Even though the majority of students did not receive a ticket to see Obama in person, many others braved the pouring rain for almost an hour to catch a glimpse of him coming in and out of the building.

“We saw him as he walked out of his car going into the auditorium,” said Soloman Michalak, freshman in LAS. “It was pretty fantastic.”

Obama’s international fame was also a selling point for some students.

“You know, Obama’s really famous,” said Collin Carmichael, sophomore in Engineering. “I’d say everyone in the world knows who he is, and to be relatively close to him or just to see him on campus is definitely really surreal.”

The students showed their excitement and energy by enduring the downpour, ignoring the discomfort of sodden shoes and soaked clothing and focusing on the unusual energy of the day.

“I thought people wouldn’t come because of the rain, but it still seems like they’re kinda sticking it out,” said Patrick Hill, doctorate student in AHS. “Whenever a former president or current president enters a campus, it’s just a cool experience … This doesn’t happen on every campus.”

To others, Obama’s visit to campus is especially significant, as they’ve supported him since the beginning of his presidency.

“I really just love Obama and supported him throughout his eight years, so it’s just really exciting to see him,” said Yamini Yedetore, freshman in Engineering.