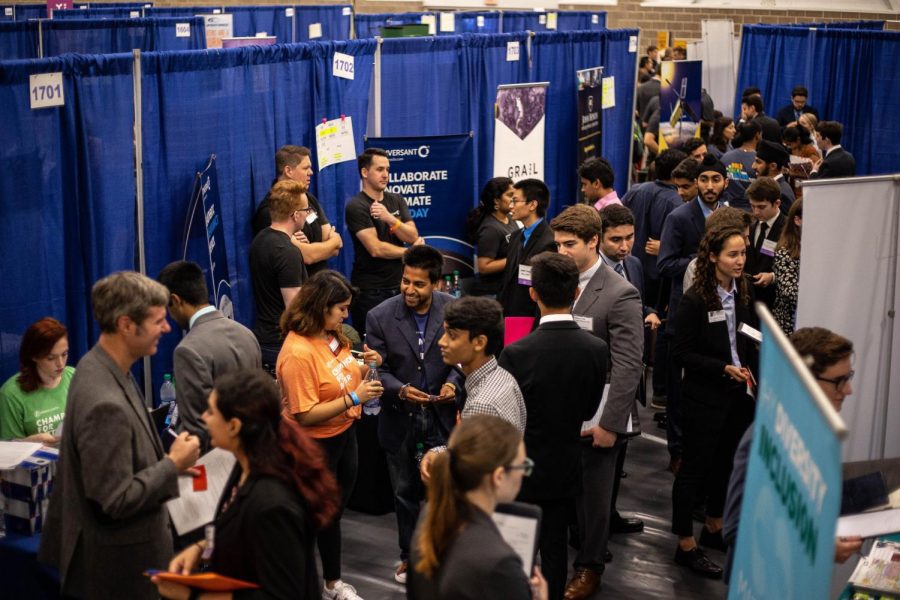 Students crowd the Activities and Recreation Center during the Engineering Career Fair on Tuesday. Over 7,000 students and 1,800 recruiters attended the fair.

Companies who cater to students in Engineering, Business, LAS and ACES will be recruiting at various career fairs hosted on campus in the months of September and October.

Fruehling said they contacted companies during the summer, and helped students with their resumes and held workshops to help students prepare during the first few weeks of school.

Even though the Engineering Career Fair is designed to cater toward Engineering students, there are participants from various other colleges.

Mingchen Shi, junior in Business, said she attended the Engineering Career Fair, and for the upcoming Business Career Fair, she felt stressed because of the need for an internship.

“Business Career Services provides us a lot of opportunities, such as chances to network with recruiters and skill training workshops. I feel like it would be helpful to have more opportunities open for international students as well, such as a smaller-size career fair,” she said in an email.

Shi suggested students go to Career Services to review their resumes and attend workshops, which helped students for the career fair.

“Or simply come to Peer & Career Career Fair Preparation Workshop, and sign up for resume critique with us,” she said.

Ryan McHenry, graduate student in Business, attended the career fair and said it is much bigger than the one he attended at the Springfield campus.

“There is a different atmosphere, too. I feel it is more serious and sophisticated. You can tell that everybody has got a goal. There is a lot of weight on their shoulders, trying to get good interviews and connections,” he said.

McHenry said he created a list of the companies, and he did some research for potential jobs and positions he might be qualified for before he came to the career fair.

“Whether you get a job or not, or the interview, it is great.  You talking to people face to face, you networking … it is a good experience to (have),” McHenry said.

Meghan McDole, an alumna who is now working at Shell, said she got her job at a University career fair 11 years ago.

“It is a great opportunity for students to come and learn about all different potential employment opportunities,” she said.

She suggested students learn the background information of the companies and the industry before they come to the career fair, and look for the companies they have passion for.

“Don’t be shy; the more questions you have, the more we can get to understand what kind of student you are and we can find a certain detailed internship you are looking for,” she said.

Zhilin Zhong, junior in Engineering, said this was his first time attending a career fair. He said he spent much time modifying his resume for the fair.

Zhong said the service of the career fair is good, but there were too many people and the line was too long.

Fruehling suggested students do research ahead of time to familiarize themselves with the companies, and talk to 10 to 15 company representatives during the fair. She said there are also other ways to engage with companies, such as information sessions and workshops, instead of only counting on a few minutes’ talk at the career fair.

“I usually tell students even though we have a lot of companies here, they can’t expect to see every single company, given the amount of time we have,” she said.