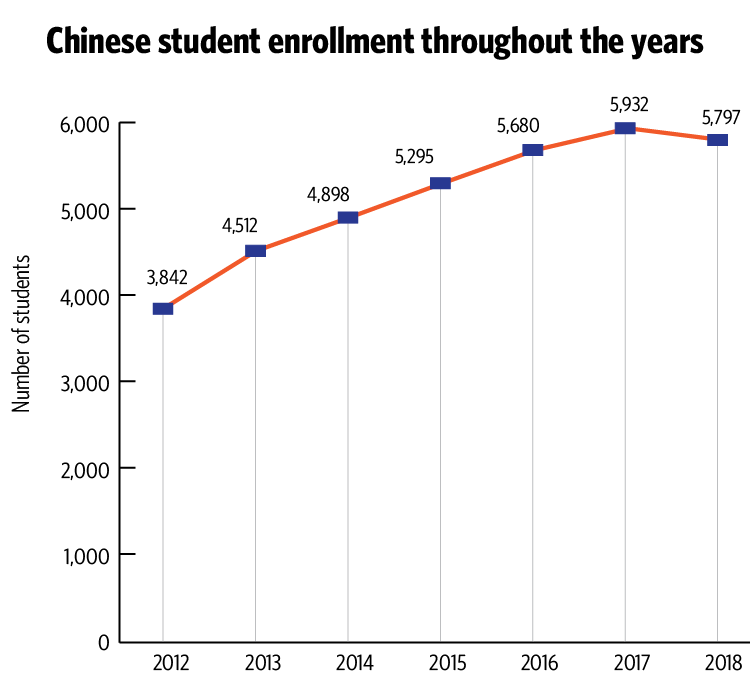 The population of Chinese students coming to the University has been growing exponentially for the past decade. This year, however, there has been a decline in enrollment for these international students, according to University Division Management Information.

Kevin Pitts, vice provost for undergraduate education, said China is the biggest contributor to the University’s international enrollment. The direct cause of the decrease is unknown, he said, but there are several potential contributions.

“Educators and schools in China could be increasing their own capacity to educate their students,” Pitts said. “Another thing we wonder about in this political climate is the availability of visas.”

In April 2017, President Donald Trump signed an executive order that would ensure H-1B employment visas, which go to the most highly skilled, highly paid candidates. Earlier this year, the Department of Homeland Security announced a stop on foreign students who illegally stay their visas.

Claire Li, graduate student in accountancy and Chinese international student, said so far she has not had any trouble with her student visa since she received it a couple of years ago. However, there may be problems in the future, she said.

“Luckily, I got my five-year F-1 student visa in 2015, so my application process was smooth,” she said. “I see a lot of Chinese students every year, so I wasn’t really aware of the decline. But I can see it happening under Trump’s administration.”

Li said the learning opportunities and cultural experiences would not have been available had she stayed in China. She advises students to consider coming to the University due to its great reputation, even if their visas might limit them and regardless of the price tag.

Although international students pay up to $42,796 in tuition a year, almost $5,000 higher than out-of-state students, Pitts said the University is not worried about the decrease of income from their tuitions.

“There’s no doubt the tuition for out-of-state and international students helps us be the institution that we are, especially as the support from the state has been reduced,” he said. “We want a student body that is global.”

Even though the decrease of international enrollment won’t hurt the University’s income, Pitts said it might affect the in-state scholarships it can offer, since the surcharge goes to fund financial aid for Illinois residents.

“All of our financial aid goes to Illinois residents,” he said. “Virtually all our scholarship money comes from their tuition, too.”

Pitts said about 1 in 7 University undergraduates are international, out of a student body of around 33,000 students.

Over the next year, Pitts said the University might be a little more intentional about attracting students to apply through social media and other low-cost mediums. However, no plans have been made yet.

“The money isn’t everything,” Pitts said. “There are also countless educational benefits. Having a global student body is a very important and positive aspect to the University.”