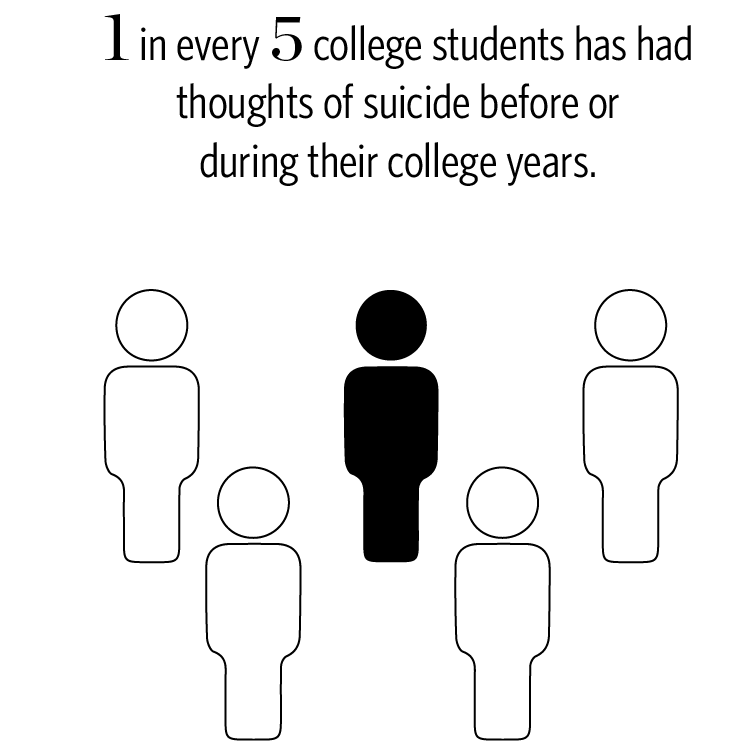 Brigham and Women’s Hospital recently published a study revealing 20 percent of college students have contemplated suicide at one point in their lives, but this came as no surprise to the University Counseling Center.

“Given what I know about college students and mental health and other things I’ve read and heard from other people, I felt like it is pretty in line with reality,” said Nichole Evans, suicide prevention outreach co-chair at the Counseling Center.

The study found 1 in 5 college students have contemplated suicide, which also includes thoughts of suicide that occurred prior to college, said Cindy Liu, co-author of the study and assistant professor of psychology at Harvard Medical School, said in an email.

This statistic is not news to Evans, who has worked for the Counseling Center for more than four years. However, actual numbers can be hard for them to judge, she said.

“It is kind of hard to really know because all we can rely on is what people tell us,” Evans said. “I’m sure there are many people who have suicidal thoughts, and they just dont tell anybody because they are embarrassed or they don’t want to act on them. But they still have them.”

From 2016 to 2017, the Suicide Prevention Team received and followed up on 301 Suicide Incident Reports, according to the Counseling Center 2016-2017 Annual Report.

Liu’s study concluded that the high rates of stress students are exposed to in college have an impact on mental health and suicidal ideation.

This impact was especially prevalent among racial, sexual and gender minorities, which emphasizes the need for University counseling services to reach out to students in these groups.

Evans said the importance of reaching students from minority groups is old news to the Counseling Center, which has been taking steps to involve underrepresented groups for over 20 years.

Having representatives of the Counseling Center attend cultural house events shows students the Center is participating in the community and helps to reduce stigma of receiving counseling, Evans said.

One of the more creative ways the Counseling Center tries to reach out to distressed students is by monitoring the UIUC Reddit.

“We’ve found that sometimes students are a little bit more comfortable with that anonymous venue. If they are going to be talking about their feelings and problems they are having, then we want to meet them where they’re at,” Evans said.

Some paraprofessionals at the Counseling Center work on social media. If they see any red flags, such as posts of distressed or depressed students, they will forward them to Evans for her to look into and take action.

“We just reply to them. We usually keep it simple because obviously they are usually describing situations that are really complicated,” Evans said.

Kristina Miller, senior in LAS, works as a paraprofessional, conducting outreach and workshops for the Counseling Center.

“From what I’ve talked to of students and staff, it has all been very positive. I feel like we’ve been reaching a majority of our campus,” Miller said.