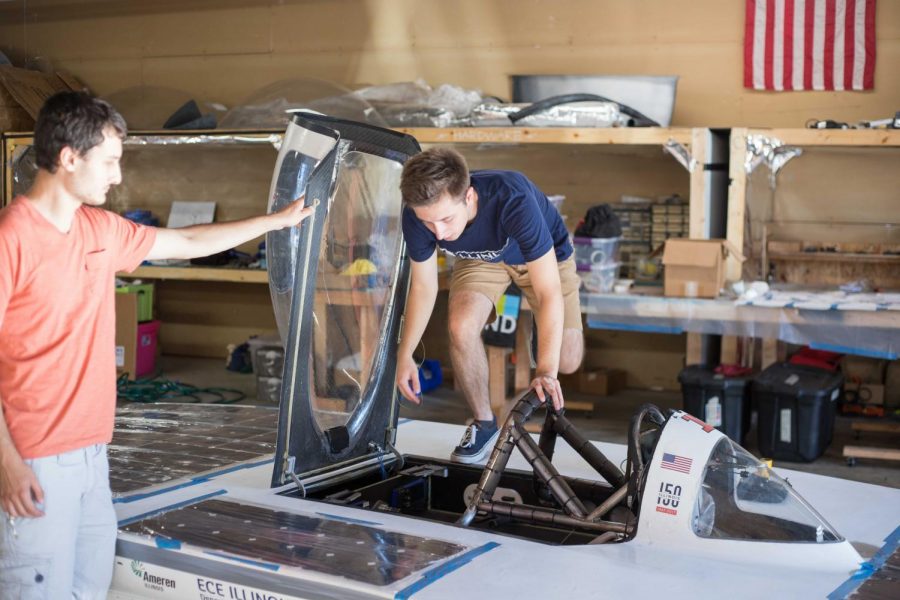 Jonathan Mullen, senior in Engineering and director of operations for Illini Solar Car, remembers driving so fast the solar car’s back wheels began skidding around turns as he raced to qualify for the American Solar Challenge.

The Illini Solar Car team met the qualifying standards, covering 400 miles in two days and went on to finish seventh in the American Solar Challenge, a collegiate solar car competition covering thousands of miles, starting in Omaha, Nebraska, and ending in Bend, Oregon.

Amalia Dungey, senior in Engineering and power distribution lead for Illini Solar Car, also drove the car during the competition.

“It’s really exciting to be in the car that you helped build, that you’ve been working on getting running. And when it goes it feels really smooth and sleek,” Dungey said.

In July, the car, named Argo, underwent four days of inspections before they were allowed to take the car on the road, with volunteer inspectors checking the car’s electrical systems, battery and paperwork before dynamic testing began.

During dynamic tests, drivers wound the car between cones, slammed the brakes on a slippery dragstrip and drove in figure-eights to prove they could maintain control of the car at higher speeds.

After passing inspections, cars were required to qualify on the track in Hastings, Nebraska, by completing either 150 miles in one day or 300 in two days before being allowed to race on the road. After running into problems with the car on the first day, the team scrambled to qualify on the second.

“It was a lot of fun but stressful at some points,” Mullen said. “You’re pretty focused. There’s a radio in your ear with people telling you your lap time, making sure you’re going fast enough and letting you know about teams that are hard to pass.”

The Illini Solar Car team qualified at the track and made their way to Omaha.

The 15-person team traveled across the western U.S. for nine days, a chase car and trailer tailing the solar car, a lead car directly in front and a scout car an hour ahead of Argo, scanning for hazards and a place to camp for the night.

Dungey, who drove the solar car for around seven days, said, “It’s extremely high stress when you’re on the road, even when the car’s running fine.”

Dungey said the car, which is harder to control when going downhill, encountered a crosswind pushing the car to the right while going downhill during the hilly race. As Dungey steered left, the car ended up in the oncoming traffic lane for a fraction of a second.

Though there was no traffic in the opposite lane, Dungey said it was a shocking experience.

Dungey said the team isn’t capable of being competitive on the world stage in Argo and will build a new car for the World Solar Challenge 2019, aiming to make significant aerodynamic improvements, as drag can significantly hinder cars moving higher speeds.

“We’re going to have a significantly different overall look,” Dungey said. “The new car is going to look out of this world, and even more like a spaceship.”