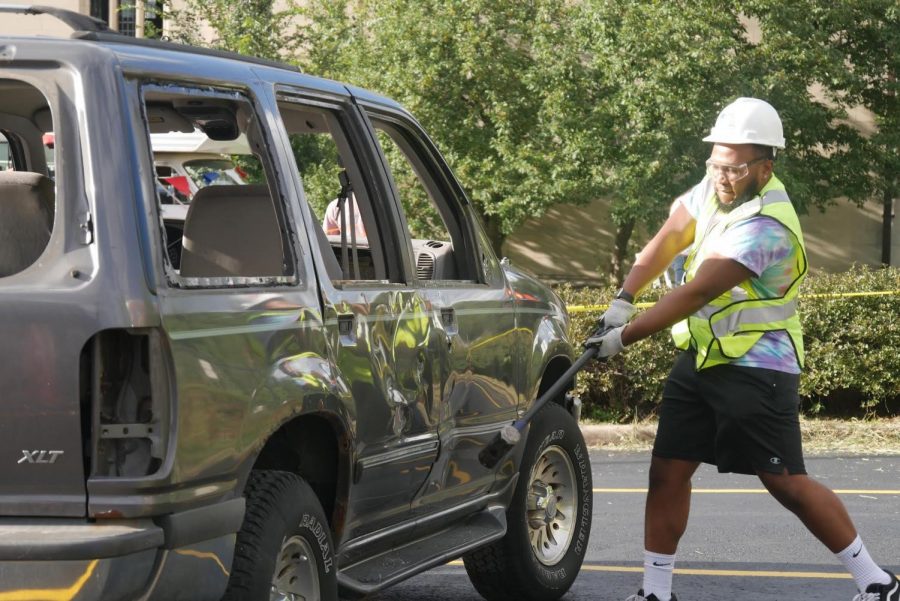 The Smash Out Hunger event raised over $500 in donations to go to hunger relief in the Champaign-Urbana community as part of Wesley Methodist Church’s block party. Hunger Action Month brought about multiple efforts on the behalf of community groups, including the Wesley Food Pantry, Etc. Coffeehouse and Illini Fighting Hunger.

While college can be stressful for a variety of reasons, most students are unaware that some people sitting in the same lecture hall might have no idea if they will be able to afford their next meal.

Prasanta Kalita, organizer of Presidents United to Solve Hunger and professor in ACES, said 25 percent of college students are affected by food insecurity.

“After attending one of the first PUSH conferences, I became aware of the campus hunger issues,” Kalita said in an email. “I knew that 1 out of every 8 people globally go to bed every night hungry, but wasn’t aware that in the U.S., hunger on 2-year and 4-year college campuses is a huge issue.”

Kalita said he learned if students do not get enough to eat, their health, academic performance, mental strength and family relationships tend to suffer.

“Students should be aware of hunger issues for many reasons,” he said. “First, students would realize that they are not alone.”

September was Hunger Action Month and Wesley Methodist Church hosted a block party to raise awareness for hunger in the community. Over $500 was raised from the Smash Out Hunger event, which allowed community members to pay $3-$5 to smash a car.

Additionally, Wesley opens a food pantry for community members every week and a student-only food pantry once a month.

“It’s really disturbing, I find, the number of students struggling with hunger. These are students that are getting financial aid, that are getting scholarships, doing work study, they’ve got extra jobs,” said Julie Dowler, associate director and campus minister of the Wesley Foundation.

Dowler said hopefully, by this semester or the next, monthly student-only pantry service can become a weekly occurrence.

“There are students that really are not sure where their next meal is coming from and that is just stress you all don’t need,” Dowler said.

Katie Thomas, food pantry director, said the pantry served over 470 students in 2017 and has served around 400 this year already. Students are also able to attend the weekly distributions open to all community members.

Connected to Wesley is Etc. Coffeehouse, which sports the slogan “Drink coffee. Fight hunger.” Etc. is a self-served, donation-based coffeehouse that opened in 1964, making it the oldest coffeehouse in Champaign-Urbana, Dowler said.

All donations from the coffeehouse are split between the Wesley Food Pantry and Illini Fighting Hunger, an RSO that hosts food-packaging events to combat hunger issues.

“We split the proceeds because both of those groups are doing incredible things to fight hunger,” Dowler said.

Dowler said she attended two conferences on food security in March that allowed her to learn about cool ways people are addressing food insecurity. Awareness would help students find resources for fighting hunger and would allow them to become aware of the negative health effects that are associated with hunger, Kalita said.