Protesters rally in the publication of News-Gazette cartoon 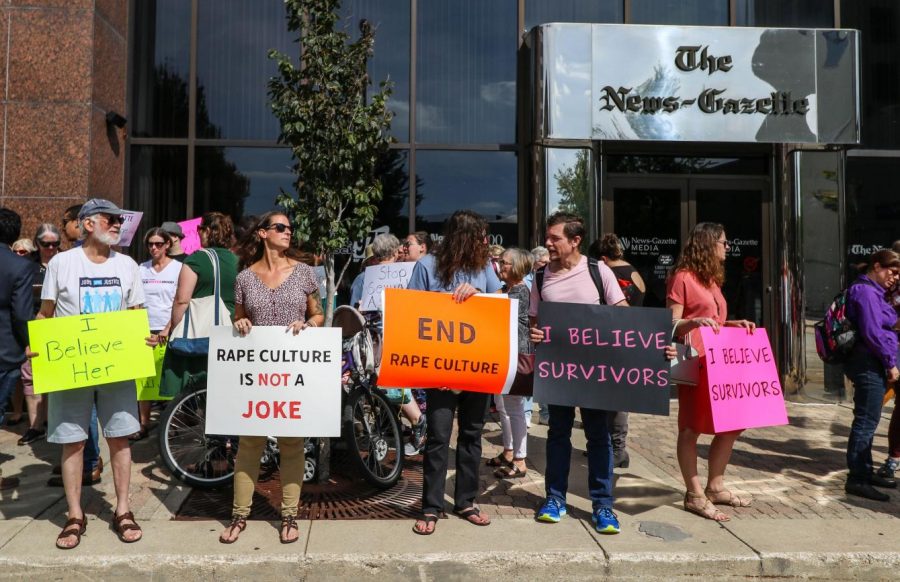 Protesters stand outside The News Gazette on Oct. 1, 2018.

A crowd gathered outside the News-Gazette office at noon on Monday, holding signs and chanting in outrage against an editorial cartoon published Tuesday, Sept. 25.

The cartoon entitled ‘Teen Angst In the Era of #MeToo’ cartoon depicts a young couple in a car parked next to a sign stating ‘Lover’s Lane.’ A thought bubble around the female’s head says “What’s he waiting for? Doesn’t he like me? What’s wrong with boys these days?” while a thought bubble around the boy’s head says “Wait — what am I doing here? This could come back to haunt me in 30 years when I’m up for a big position.”

Robert Ariail, illustrator of the cartoon, released a statement on the News-Gazette website where he said he intended “a commentary on modern life and the chilling effects surrounding the #MeToo movement and more specifically, the Kavanaugh hearings.”

The cartoon sparked anger within the C-U community, prompting all Democratic Champaign County Board candidates to not participate in the candidate forum hosted by the News-Gazette last Friday.

“The choice to post such a disrespectful, inappropriate and sexist cartoon prompted myself, and other democratic candidates to withdraw our participation from the forum that was held this past Friday,” said Tanisha King-Taylor, Democratic Nominee from Champaign County Board District 10. “We are not comfortable participating in a forum with the News-Gazette’s name attached to it, and I still stand by that decision today.”

After sharing her own personal experiences of sexual assault, King-Taylor said these bold choices are necessary for local candidates, since the Kavanaugh hearing proved they cannot leave decisions up to candidates on a national level.

Carol Ammons, Democratic member of the Illinois House of Representatives, said the point of the rally was to demand the News-Gazette print a weekly column by local feminists and add female representation to their editorial board, along with input from the community.

Mike Ingram, running for Council Board in District Six, who spoke at the rally, said he decided not to participate in the upcoming candidates forum because he found the political cartoon problematic and thinks the News-Gazette needs to be held accountable for their actions.

“Our kind of collective feelings of how problematic it is and it being in line with plenty of other problematic things that the News-Gazette has done over the years and doesn’t seem to really be willing to change,” Ingram said. “Really they only double down when any pressure is put on them. I kind of felt like it would be disingenuous of us to speak out about it and still participate in something that has their branding on it.”

Ingram said he is discussing having an alternative forum in the near future and has contacted other Republican candidates concerning the potential event. He hopes to possibly have the Champaign League of Women’s Voters and the NAACP help co-host the alternative forum.

“It’s not a particularly great time to be pushing forth an attempt at jokes like that,” Ingram said. “It’s just reading that and seeing the response to it, I mean, I don’t know how anybody could see that come across their desk and think it was a good idea.”

Danielle Chynoweth, The People’s Agenda, an inclusive organization that strives to provide a voice for those who have been systemically disempowered, co-founder and rally organizer, said the most important thing she hopes to see is a change in the News-Gazette’s staff.

“I’ve lived in this community since 1995 and I’ve seen what we can accomplish when we organize rallies and conferences,” she said. “The News-Gazette needs to be accountable to its readers, and in order to do that, they need a more diverse editorial team. Sexual assault is not a joke.”

Correction: In this article, “protesters” was misspelled as “protestors.” The Daily Illini regrets the error.