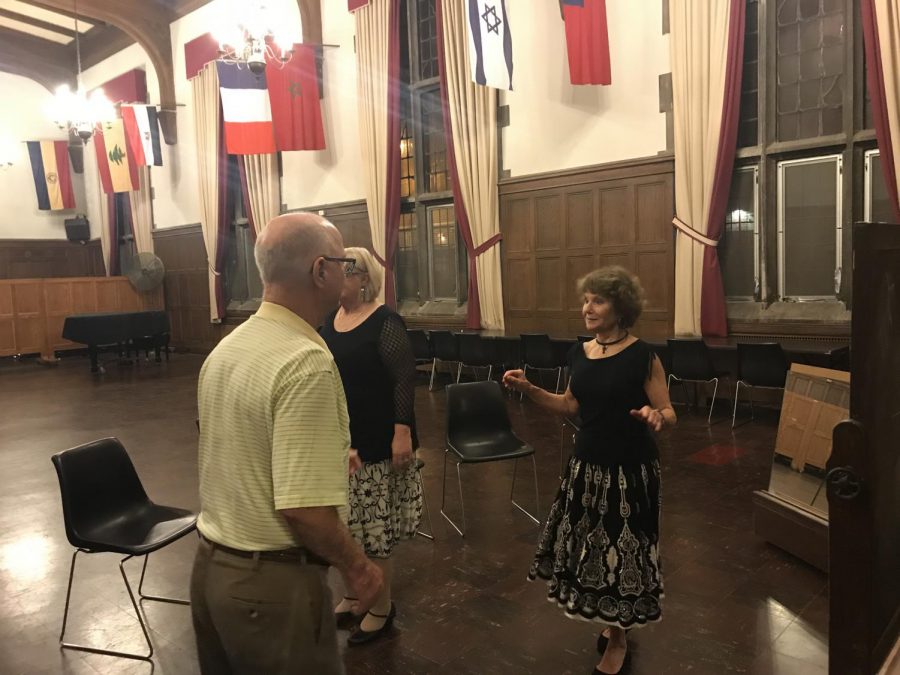 Aurora Villacorta teaches a samba class to Dena and Jim Vernette in Latzer Hall at the University YMCA on Monday.

The University YMCA launched a $1.2 million campaign to revamp its historic 81-year-old building and to provide a more sustainable future for the organization.

Although the campaign was officially announced to the public a little over two weeks ago, the YMCA has already accumulated $845,000 in pledges from  a majority of the donors.

“The major focus of the renovation is going to be Latzer Hall, the major community space in the YMCA which has been preserved since 1937, when it was built,” said Mike Doyle, executive director of the YMCA.

The campaign revolves around three focal points; including renovating the building, increasing fundings for programs run by the YMCA and increasing its existing endowment of $3 million.

“With new initiatives and programs such as the Art @ the Y, we really wanted to deepen the impact of the work that they were doing, and one of the ways we could do that is by providing them with the resources to do so,” Doyle said.

In fall 2017, the YMCA conducted an evaluation of its support base by asking donors how much they would be willing to donate to the organizations. The YMCA based its campaign around the rough estimate it garnered from the evaluation.

The board of trustees at the University YMCA has a meeting every five years to determine a roadmap for the future of the organization. The board’s most recent meeting in 2016 listed sustainability of the organization as a high-priority agenda item, which was the first step of the campaign.

The sustainability programs at the YMCA aim to make the building more self-sufficient by installing solar panels on the roof of the building.

The alumni and donors also suggested honoring Steve Shoemaker, the ex-director of the YMCA, by using a portion of the funds for interfaith work.

“Shoemaker was director when 9/11 happened, and he reached out to the Muslim community and provided them with a safe space where they could meet and gather because there was a lot of tension in the community, and so we want to further his work in interfaith programs,” Doyle said.

The last stretch of the campaign is going to be carried out by organizing alumni receptions in Chicago, Washington and San Francisco.

Kenny Long, doctoral student in Engineering and board member of the YMCA, said the building has been a unique space where he progressed from just an undergraduate student to a community member.

“It allowed me to develop social awareness, to be an active community member and to understand what it means to be a good human overall,” Long said.