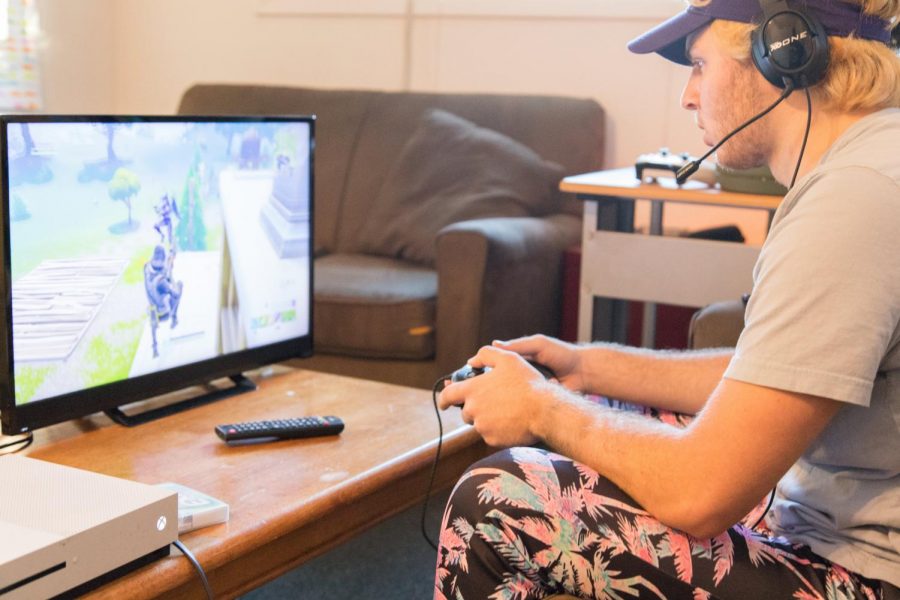 Mike Hoke plays a game of Fortnite in his apartment on Saturday.

Student players of the hit video game Fortnite who are looking to interact with fellow players on campus can now join Fortnite Frenzy, a new registered student organization created specifically for players of the online, cooperative shooter-survival game.

“There is a market for people who want to play Fortnite on campus,” said Michael Hoke, senior in LAS and president of Fortnite Frenzy. “It is a cultural game that a lot of people seem to pick up on. I think that there could be a long-term market for it.”

Fortnite, created by Epic Games in 2017, consists of 100 players in each round fighting battles using various weapons and a building tool that allows them to build towers and walls to use as defense or as a strategy to.

Hoke is a huge fan of the game himself and noticed the attention Fortnite was getting on campus. That is when he decided to unite the University’s Fortnite community.

“You watch NFL on Sundays, and there (are) guys doing Fortnite dances when they score a touchdown,” Hoke said. “So it seems like it is the most culturally relevant game that we have had potentially ever.”

The characters in Fortnite can dance inside the video game, often after victorious moments, such as when a player has defeated another player or has won the game. The dances range from the Charleston to made-up jigs fans have sent in to Epic Games.

Fortnite Frenzy came about after Epic Games changed its online services to allow players from different video-game platforms to play with and against each other for the first time. This attracted Aaron Guo, freshman in Business, since he could now play against people with different consoles.

“I am a big fan of Fortnite, and when I found out I can hang out with people (from different video game platforms) and play Fortnite, do squads and duos, I was excited,” Guo said. “It is just enjoying to be with others.”

The RSO is trying to help University Fortnite players make new friends and improve their gaming skills. This was the case for Elijah Marder, sophomore in AHS and treasurer of Fortnite Frenzy.

“I hope to get better at Fortnite because I am not that good right now,” Marder said. “And, of course, make some friends along the way, spending some quality time not studying.”

At the same time, Hoke has greater ambitions for Fortnite Frenzy.

“I see a group of guys and girls just hanging out playing Fortnite,” Hoke said. “If it could lead into a big-time, University-wide tournament, that would be cool, maybe potentially get people on board to create an (eSports) team.”

Hoke wants to attract professional Fortnite players to the RSO to compete against other universities.