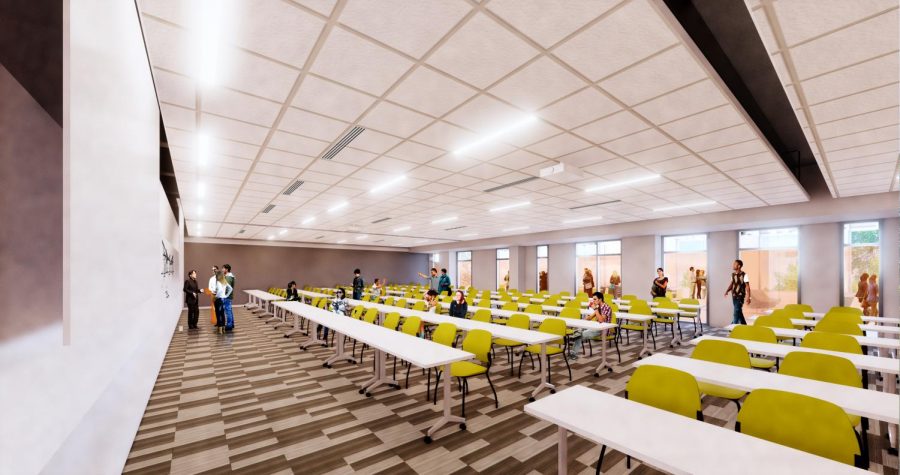 Classroom in the Mechanical Engineering Building on Sunday. A five-story building will be added to the existing infrastructure as part of a $41 million renovation.

The University will give the 68-year-old Mechanical Engineering Building a $41 million modernizing makeover, which is set to be completed in 2021.

William Bowman, director of communications for mechanical science and engineering, said they will be renovating the existing space and attaching a five-story building, which includes a student center and a maker space. The renovation will also increase the number of classrooms available.

“(The addition) is going to have a big maker space on the lower level for students across campus to be able to use for any dream and aspirations when it comes to innovation,” Bowman said. The maker space will include a computer lab, 3D printers, laser cutters and other tools.

Scott James, sophomore in Engineering, said most of the tools they plan to include in the maker space are already available in the Mechanical Engineering Laboratory.

“It’s nice to have a second space because the MEL is also on the older side and (is) slightly more run-down. I feel like these newer facilities not only are aimed at undergraduate students but especially aimed at those doing research,” James said.

The maker space will take over the basement of the new building. The main student center and a coffee shop will be located on the ground level.

The top three floors will have active learning classrooms, which give students opportunities for team building. Instead of the chalkboards and singular desks that are currently in the MEB classrooms, the new classrooms will have tables that can be moved and grouped differently for collaboration and more technology in the classrooms.

Jessica Yoon, freshman in Engineering, said it’s difficult to collaborate with classmates in the existing building.

“I feel like it’s more closed. I would love to see open classrooms so we can just glance through,” Yoon said.

Damon McFall, director of facilities and operations for mechanical science and engineering, said he hopes the makeover will increase the sense of community in the MEB.

“On the first floor, we hope that we have people bumping into each other and be able to brainstorm together,” McFall said. “We’re looking into better ways to use our corridor space so that we can have active learning happening on the fly.”

He said each floor would be like a different neighborhood, with some floors dedicated to quiet studying and others for socializing.

Eric Liro, junior in Engineering, said students go to the mechanical engineering laboratory to work on projects because there is no place at the MEB to work together.

“Sometimes if you have 10 minutes in between class, there isn’t any place to sit down. Other buildings have couches or somewhere like that or areas where you can work together,” Liro said.

Bowman said the idea for renovations made to the MEB has been kicked around for a couple decades but it didn’t become serious until 2015. Construction was to start in 2017, but the project expanded to include the five-story building.

“We knew we wanted to do the addition, but then we kind of went back to the drawing board with our architects and decided that since the addition was going up, there’d be an ideal time to renovate the building,” Bowman said.

Currently, $37.3 million of the proposed $41 million has been raised, Bowman said. He hopes renovations will start in May 2019 after spring classes end and will be ready for fall classes in 2021.