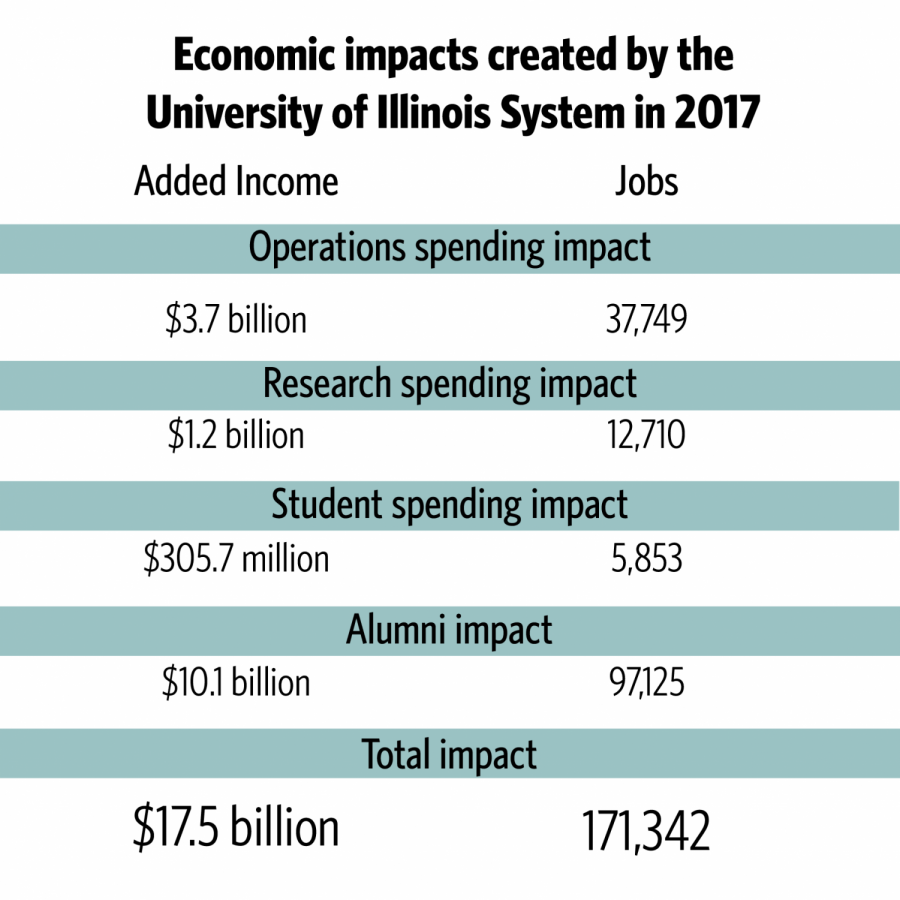 A recently released study shows the University of Illinois System contributes $17.5 billion to the Illinois economy annually and supports approximately 1 in every 46 jobs in Illinois.

The study was conducted by Emsi, an Idaho-based analytics firm. Hannah Ruffridge, assistant director of consulting in higher education at Emsi and project manager of the report, said the study includes jobs that are directly and indirectly supported by the University system.

Indirect impact takes into account the multiplier effect down the supply chain. For example, Ruffridge said when employees of the University system use their salaries to buy groceries, the grocery stores will have to restock from their suppliers, creating a ripple from the initial spending, which is included in the total contribution.

An example of direct impact are the earnings of alumni. Education allows alumni to be more productive in the workforce and make more money than an uneducated person, Ruffridge said.

“Those alumni are now more skilled and productive, making businesses more efficient and profitable, which means businesses can then hire or buy more material and there’s that again, that ripple and multiplier effect down the supply chain,” Ruffridge said.

The study calculated that the University system supports around 171,000 jobs in total through the economic contribution, and compared it with the total number of jobs in the state.

The study was conducted to update a 2015 economic impact study, said Jan Dennis, assistant director of the Office for University Relations, in an email.

The Champaign-Urbana campus alone was found to be supporting over 88,000 jobs in Illinois, representing 1 in 89 jobs in the state, according to the study.

“Jobs are likely more concentrated in C-U but spread across the state through purchasing contracts and offices such as Extension,” Dennis said.

The University of Illinois Extension is the University’s flagship outreach effort that offers educational programs to all counties across the state.

Ruffridge said the study was conducted by sending out surveys to all three campuses in the university system. The survey results are based on data from the 2016 to 2017 fiscal year.

The study also calculated the opportunity costs of students, which may include time spent working and the money invested in their education, including out-of-pocket costs such as money spent on school supplies.

Ruffridge said for every dollar students in the University system spent on their education in FY 2016 to 2017, they can earn $5 back over the course of their career.

Ade Awolola, junior in Applied Health Sciences, does not believe all students will earn a 5 percent return from their investments in education.

“For me, I feel like it depends on major. That might be true for doctors and they’re good in their field,” Awolola said.