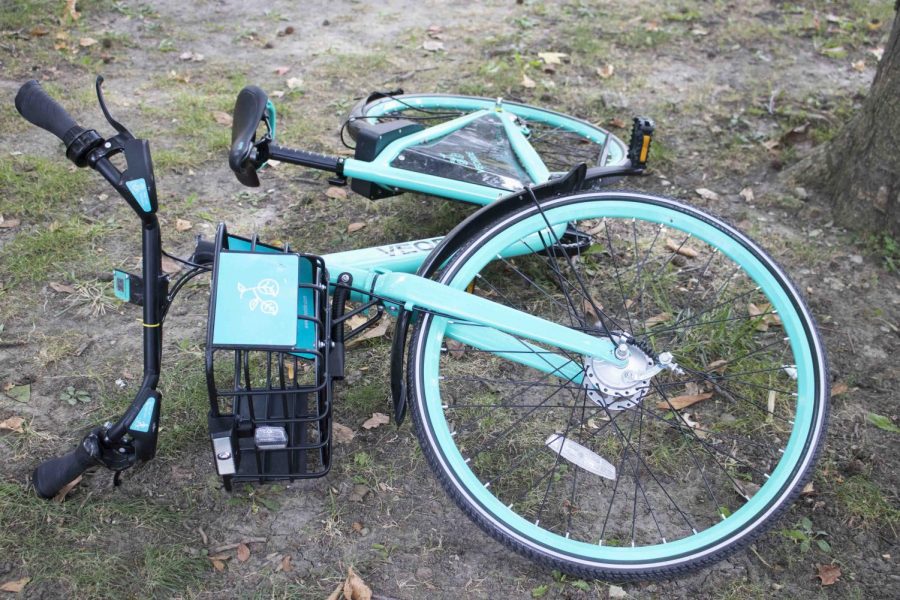 VeoRide bicycles have been damaged and used in pranks since their introduction to campus about two months ago.

Almost two months after introducing its bike share service to campus, VeoRide has encountered problems including pranks, bicycle misplacement and damage to the bicycles.

According to Linda Jackson, communications director for VeoRide, the app-based dockless bike sharing service is figuring out how to better educate users about the rules associated with using VeoRide and to emphasize its reporting system after the mistreatment of bicycles began to appear on campus and online.

Some users have been leaving the bicycles in front of buildings or in the middle of the streets, which disrupts the flow of foot and vehicle traffic.

“I literally see bikes parked up in the street where cars are supposed to be parked and I’m like, ‘Why?’” said Angelica Czarnecka, senior in Engineering. “People don’t have common sense with where to leave them.”

Jackson said students shouldn’t treat the bicycles differently just because they are not personal bicycles.

“Treat them like they’re your own bikes,” she said.

Photos have surfaced on the internet showing VeoRide bicycles in elevators, on top of bus stops and in the middle of streets.

One morning, the entire Stratford Christian Cooperative House was surprised and confused to find at least 70 VeoRide bicycles in its front lawn facing directly toward the house.

According to Rachel Hillebrand, sophomore in ACES and resident of Stratford, the prank was pulled off by their male counterparts in Koinonia Christian Cooperative House. Hillebrand was stunned to find all the bicycles on the lawn.

“When we woke up to it, we were like, ‘What the heck is this?’ But we knew it had to be Koinonia,” Hillebrand said. “They even admitted to it as well.”

Trevor Peterson, senior in Engineering and resident of Koinonia, said they pulled off the prank because of a rivalry between the two houses.

“There has always been a bit of a sibling rivalry between our houses, and the ball was in our court, so to speak, to pull something on them,” Peterson said. “In the end, it was a totally harmless prank with all of the bikes obtained legally without violating any rules, and I’m honestly impressed with how many we were able to get.”

However, the prank didn’t last long; the bicycles were soon picked up by users.

“By noon that day, (the bicycles) were all gone. People just came by and were getting them,” Hillebrand said.

While this prank may not have caused damage to the bicycles, other pranks and situations have. Some have reported riding damaged bicycles.

“I didn’t have my bike for about a month, so I had to ride VeoRide bikes everywhere, and they are poorly made bikes,” said Adrian Bytyqi, freshman in Engineering. “You see them everywhere on campus, and half of them are broken. They fall apart really easily.”

Tim Chao, mechanic at Neutral Cycle in Champaign, disagrees with Bytyqi. Chao has also used VeoRide bicycles and said they are sturdy until users take pranks too far. He found the Stratford prank amusing but disagrees with other pranks, such as placing VeoRides bicycle in trees.

According to Jackson, VeoRide is looking to take damaged bicycles to local repair shops, such as Neutral Cycle, to get them fixed. They also keep track of the bicycles’ mileage to figure out when they require tune-ups.

Chao said they are still talking to VeoRide about their role, but they may take in severely damaged VeoRide bicycles to repair.

Despite the issues VeoRide faces, Jackson said they are still positive about the University’s VeoRide market compared with other universities.

Nevertheless, Jackson said its users are the best solution to these problems and urges them to report any problems they encounter with the bicycles through the app, whether it be a misplaced or damaged bike.