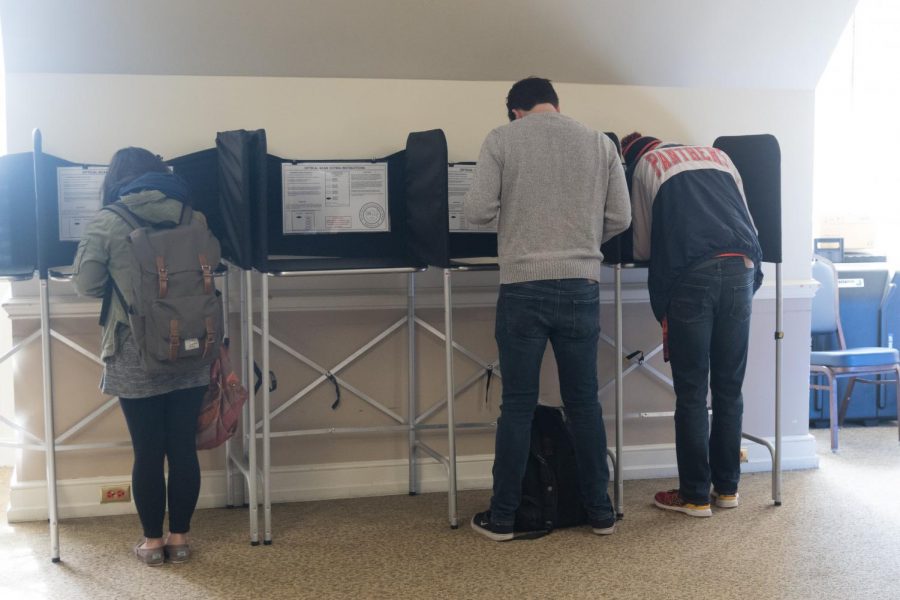 University students vote early at the Illini Union on Saturday. The University joined the Big Ten Voting Challenge, hoping for the most improved voter turnout.

The University is participating in the Big Ten Voting Challenge, in which universities are competing to get the most students to vote in the Tuesday midterm election.

The challenge is being conducted by the Association of Big Ten Students and has already registered over 32,000 students to vote in this midterm election through the campaign. Efforts at the University are being carried out by the Illinois Student Government.

The purpose of the Big Ten Voting Challenge is to drive civic engagement by getting students out to vote and to drive competition between schools in the Big Ten conference, said Kirsten Peterson, junior in LAS and co-chair of the ISG Get Out the Vote task force.

Peterson hopes the creation of the task force and other new events will help increase voter turnout at the University and give it a better shot at success in the challenge.

“Illinois, historically, has not done very well in these competitions,” she said.

Since the competition between Big Ten schools in academics and sports is high, Peterson thinks it is a good idea to reallocate that competitive nature to things such as civic engagement and voting.

“Our age demographic tends to be the ones that don’t participate and that don’t turn out the most,” Peterson said.

According to the challenge’s website, trophies will be given out to two universities for the highest eligible voter turnout and the most improved turnout, respectively.

Peterson said her main goal for the University is to receive the trophy for most improved in voter turnout.

Rahul Raju, senior in Engineering and co-chair of the task force, said votes are being tabulated after elections through the National Study of Learning, Voting and Engagement at Tufts University.

Raju said although ISG has committed significant resources to midterm voting efforts, other schools in the Big Ten Conference competing in the challenge have more resources assisting in student voting.

“Northwestern talks about political engagement during class registration and orientation, and Michigan uses some great software tools,” Raju said in an email.

To make the University more competitive with other school efforts, Raju said he and others have plans to adopt some of the effective tools used by Big Ten peers.

“This can’t just be an election-time thing. We’re talking about a year-round effort to have students engage in local, state and national politics,” Raju said.

Aishwarya Shekara, sophomore in LAS and chair of community and governmental affairs in ISG, has helped with efforts through the creation of events, such as Pollapalooza, and is proud of ISG’s efforts toward the challenge.

“I think what we’ve achieved has been exponential,” Shekara said.