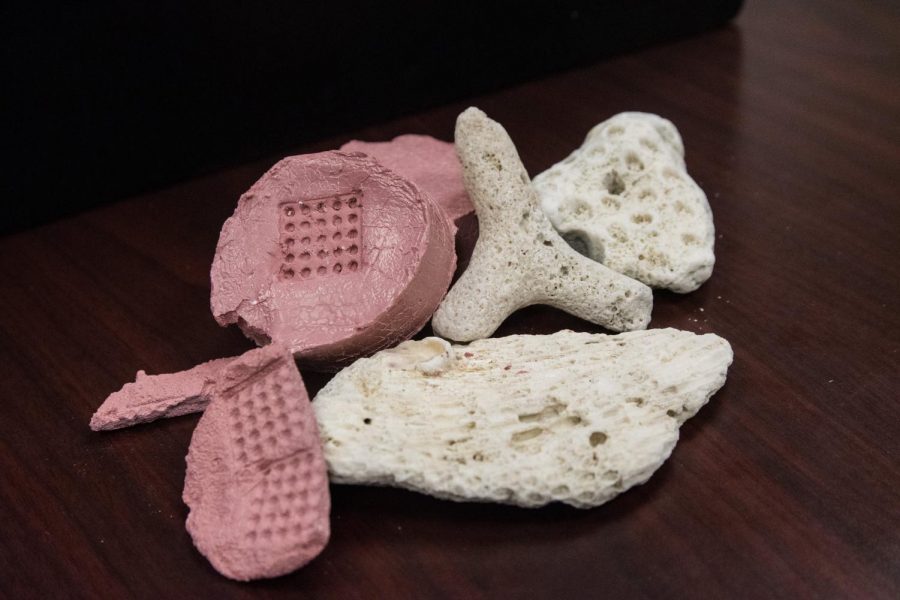 An assortment of coral skeletons beside substrates used to start new coral colonies.

A team of three University professors, along with a professor from San Diego State University, received an $825,000 National Science Foundation Convergent Research grant to study the recovery of coral reefs.

Coral reefs have been dying due to ocean acidification caused by an increase in carbon dioxide content in the air. However, coral reefs are an important source of revenue for areas that depend on ecotourism, like the Caribbean. Most of the drinking water in the Midwest, such as water from Lake Michigan, is also stored underground inside fossilized coral reefs.

Amy Wagoner Johnson, professor in Engineering and one of the recipients for the grant, worked on materials used for bone regeneration and thought the ideas used in tissue engineering could be applied to coral recovery.

Because coral larvae and algae compete for surface space to grow on, Wagoner Johnson is looking for materials that are less suitable for algae to grow on and that are ideal for coral larvae to attach onto.

Materials will be tested by 3D printing objects with different surface textures. Based on previous observations, larvae are attracted to colors, so the printed objects will have various colors. After the tests are complete, larger versions of the objects will be made and dropped into the ocean for coral to attach to.

Gabriel Juarez, assistant professor in Engineering and another recipient of the grant, specializes in fluid mechanics and is studying how water flow affects larval attachment. Coral larvae can face difficulties attaching to surfaces depending on which direction water flows.

Juarez is building a specialized fish tank to observe the motion of the larvae swimming near the surface of the water. The design of the fish tank needs to be biologically friendly, simulate water flow in oceans and be easily captured on video.

After the fish tank is completed, Juarez will take videos of the larvae swimming and use a program to map their movements. Artificial learning will determine whether larvae move randomly or if they actively look for an ideal place to land.

Bruce Fouke, professor in LAS and another recipient of the grant, will study the growth and health of the coral larvae in Juarez’s tank. One way to study larvae health is to look at the color and resilience of the tissue. Another technique is to extract a small piece of tissue from the coral and use molecular tools to track DNA, RNA and proteins.

The grant is interdisciplinary and brings researchers from seemingly unrelated fields together to work on a problem that deals with societal needs, Wagoner Johnson said.

The group of professors who received the grant will be hosting three workshops during the three-year duration of the grant.

The first workshop will take place this summer at the Caribbean Research and Management of Biodiversity Marine Research Station in Curacao. Biologists and engineers will collaborate and learn about coral spawning. This workshop will focus on brain corals because the species will be spawning around the time of the workshop, which means the larvae will be less fragile during the experiment.

“I hope there’s a lot more attention to it,” Wagoner Johnson said. “If we can show that engineers have something to contribute to this problem and that this kind of team can be successful, then funding agencies will be more likely to be willing to give money.”

Juarez said he hopes the project will encourage biologists and engineers to work together and would consider the work to be a success if they establish an annual conference at the end of the three-year period.

The key to solving problems such as those related to energy, the environment, medicine and space exploration relies on interdisciplinary research, Fouke said.

“Illinois is structured in a way to enhance, nurture and support integrative research in a way that is really remarkable,” he said.