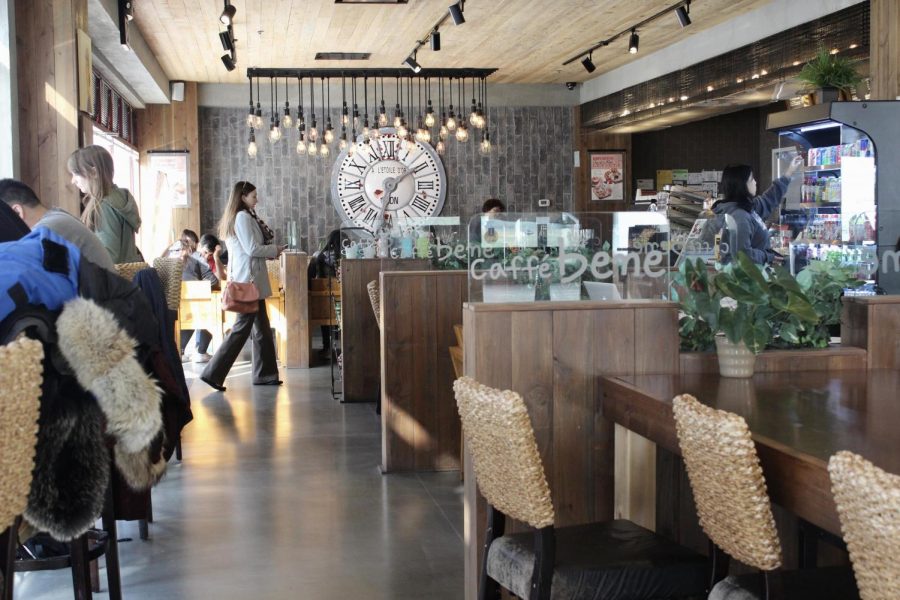 Patrons study and relax with their beverages in Caffe Bene, located on the corner of Gregory Drive and Nevada Street on Thursday. The two Caffe Bene locations on campus are replacing plastic cups with biodegradable cups, while keeping the price of their products the same.

Both campus locations of Caffe Bene will be switching to biodegradable cups, after exhausting their current plastic cup inventory, in 2019.

Samuel Ham, owner of Caffe Bene on Green Street, was inspired by posts on social media urging people to stray away from single-use plastics, such as the coffee cups Caffe Bene uses.

Ham said Caffe Bene decided to switch to a biodegradable cup option to avoid the trouble of the inevitable switch down the line.

“Both Caffe Bene’s on campus are switching to biodegradable, but I don’t know about other businesses,” Ham said.

When biodegradable cups decompose, they return to the food cycle as fertilizers or other organisms in the food chain, said Tyler Courson, sophomore in ACES and president of Red Bison, a registered student organization primarily focused on the restoration of natural areas on and near campus.

Courson said unlike biodegradable cups, plastic cups can only be recycled a certain amount of times because plastic molecules begin to break down and cannot be reheated in order to be recycled.

Although the price of biodegradable cups tends to be more expensive than plastics cups, Ham said Caffe Bene will proceed with the change and hopes to eliminate all plastic cups by 2019 without raising the price of the products.

“The price of items is still going to be constant, but biodegradables do cost more than plastics,” Ham said. “But if it means to save the environment, then it’s not a big issue to spend a little money.”

Courson said in order for businesses to continue making a profit using biodegradable options, more companies manufacturing the cups need to make the change to push the price down.

“A lot of people don’t care about the environment, but it will be nice to be a little portion of companies that take part in the change,” Ham said.

Ham said he thinks when people learn Caffe Bene is using less plastic, customers may be more likely to come, use and buy the products.

“Sometimes customers do come in and ask if we have biodegradables cups. If we do they stay, and sometimes if we don’t they leave, it kind of draws or pushes customers, that’s what I have noticed,” Ham said.