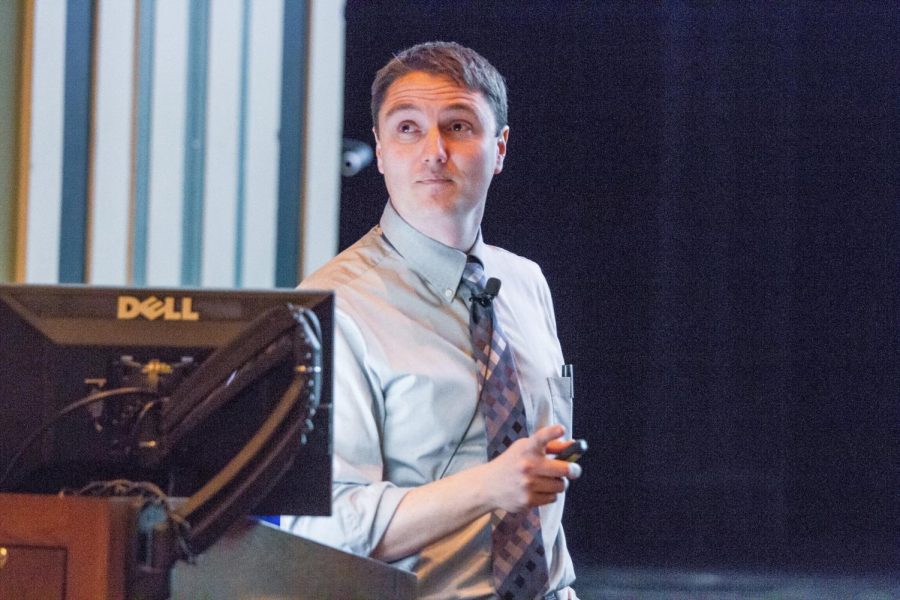 Eric Snodgrass lectures during his class in Lincoln Hall Theatre on Tuesday. Snodgrass is leaving the University in January.

Eric Snodgrass, professor in LAS who teaches the popular course ATMS 120: Severe and Hazardous Weather, will leave the University in January 2019.

After Snodgrass’ company, Agrible, was bought by Nutrien in July, the company offered Snodgrass the opportunity to work there full-time.

Avalon Ruby, junior in FAA, took ATMS 120 when she was a freshman. She thinks ATMS 120 is popular because the course is easy to understand.

“It’s not like the material is spoon-fed to you super easy all the time, but it’s put into layman’s terms. Snodgrass is really good about making sure that his students understand what’s happening,” Ruby said.

“I’m really upset that (Snodgrass) is leaving. I think that he is a great teacher, and I love being in that class so it sucks that he is not going to be here anymore,” said Cassidy Manuel, freshman in DGS.

Snodgrass said he will be transitioning to his new position at his company at Research Park. He will be helping growers understand how weather and other factors affect  global agricultural yields.

During the spring semester, Frame will be taking over ATMS 120.

Snodgrass thinks Frame will be able to maintain his legacy in the department.

“I think that the students that are going to get to take Professor Frame’s “Severe and Hazardous Weather” class are in for a treat,”Snodgrass said. “Like I said, he is one of the world’s leading experts on severe weather, and he is respected throughout the entire community. So they’re going to get some incredible teaching from him.”

Snodgrass will be teaching the online version of ATMS 120 for the last time during the winter semester. Bob Rauber, director of the School of Earth, Society & Environment, and Robert Trapp, department head of atmospheric sciences, have put together a search committee to hire Snodgrass’sreplacement by the end of the spring semester.

“I will sorely miss teaching routinely at the University of Illinois. I will miss the students deeply, and that will be a major sacrifice that I’ll have to make in leaving, one that I was not excited about making, and that’s the thing that made me agonize about my decision for three months,” Snodgrass said.

Frame said he is not going to change many aspects of ATMS 120 because it is one of the most popular courses on campus. He said his favorite part about working with Snodgrass is his focus on students.

“We don’t view our students just as numbers,” Frame said.

Although Frame said he is going to miss Snodgrass, he is looking forward to teaching ATMS 120 in the coming semester.

“I’m excited about it. It’s going to be a fairly new experience for me. I haven’t done it in about nine years. So it’ll be something different, and change can always be a good thing,” Frame said.

While Rauber said Snodgrass’s departure is a loss for the department, he supports his decision.

Although he’s looking forward to working for Agrible full time, Snodgrass said he is going to miss working with students.

“I’m going to miss being able to watch students go through the process of discovery,” Snodgrass said. “That is a very rewarding thing for teachers, to watch a student take in new information and assimilate it into the way they’ve been learning things their whole lives such that they not only understand it, but they show some mastery over that material and they show how to apply it.”