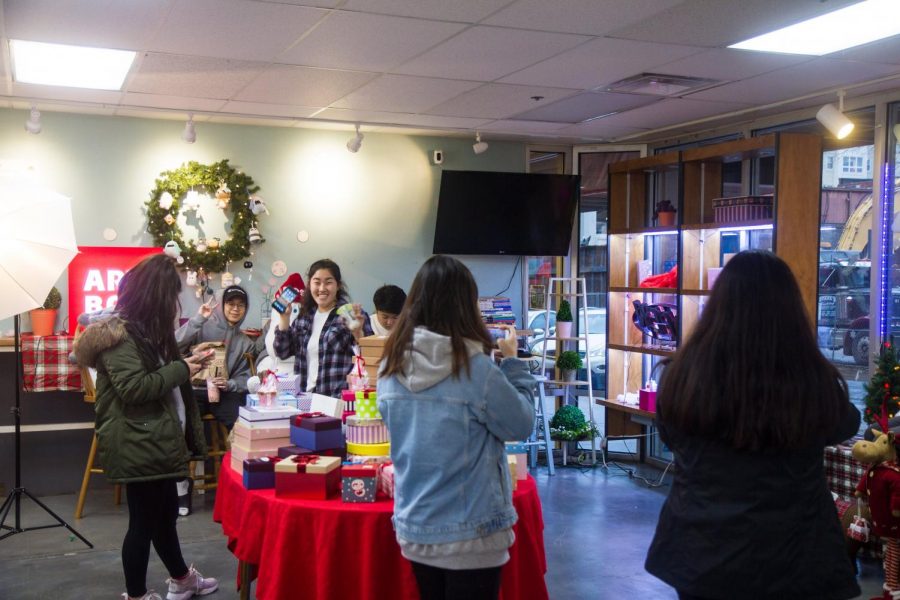 The Art Box, a gift shop located at 707 S. Sixth St., showcases its Christmas decorations in preparation for the holidays Saturday.

As the majority of students leave campus for the holidays, retail stores on campus are expecting a drop in sales. However, they are exploring different ways they can maintain their businesses at the same level as when school is in session.

Mary Mulligan, junior in LAS and employee at Apricot Lane, a clothing retail store located on Green Street, said, “The students are pretty much the heart and soul of the store. So when they’re gone, it’s typically not very busy, unless local people are looking for a nicer place to shop.”

Skulborstad said the store changes its goal sales amount from $45,000 a month to $35,000 a month during winter break.

However, some local stores have found various methods to deal with reduced number of patrons over winter break.

Cory Shumard, retail manager of Gameday Spirit, the official fanstore of the Fighting Illini located on Green Street, said the store’s sales will also be impacted by reduced traffic during winter break.

Shumard said one of his store’s strategies is to have major sales before winter break. He said December is a good month for sales because the academic calendar keeps many students in town for finals.

The amount they make from Dec. 14 to Dec. 22 will make up for two-thirds of the sales they receive for the entirety of the month.

Other stores, such as Ragstock, a recycled clothing store located at the intersection of Green and Wright streets, is looking to off-campus customers to maintain their sales.

Skulborstad said online sales on Facebook are an important way to counter declining sales over the break. Fifty percent of Ragstock’s sales during winter break came from social media sales, instead of the usual 20 to 30 percent when students are in town.

Shumard said they will reduce the time the store will be open by one hour during break.

Apricot Lane, Artbox, a gift shop on Sixth Street, and Gameday Spirit will also reduce their open hours over break.

However, Shumard still hopes to pad the losses with discounts while students are still in town.

“I hate missing any sales. That’s just my nature. But at the same time, we want to have a lot less inventory on hand during the first quarter of 2019,” Shumard said. “We capture every opportunity during December.”