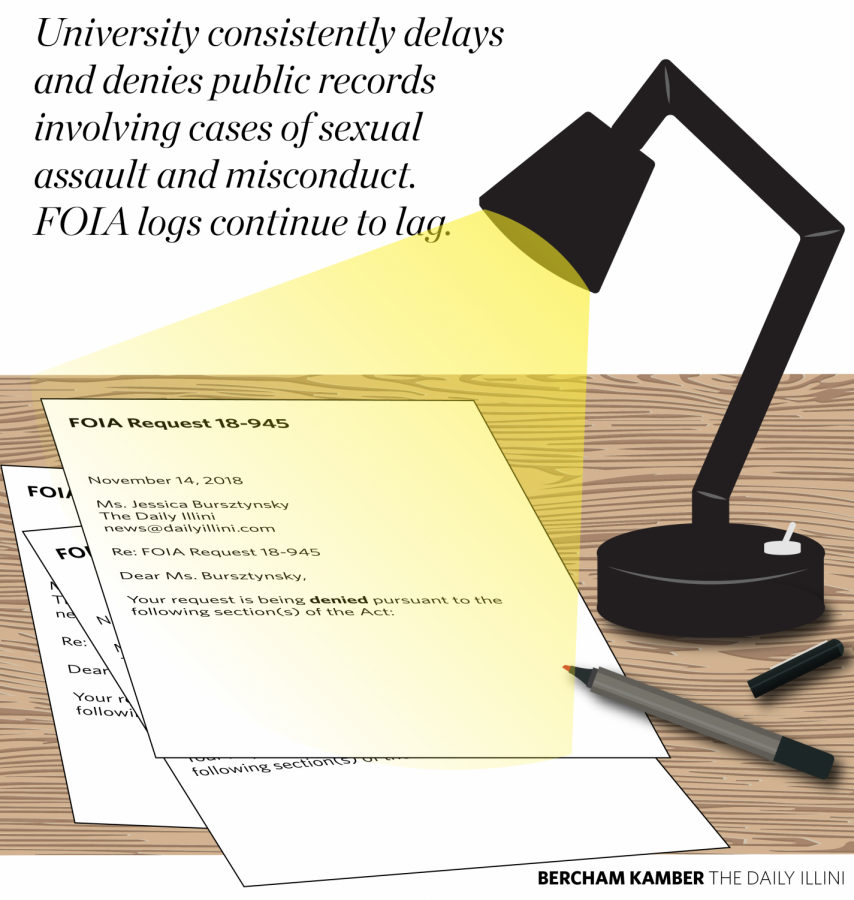 All six requests have been denied, even when they were only for an aggregate number of complaints.

The requests were made to the University of Illinois System under the Illinois Freedom of Information Act over a period of eight months.

“The University of Illinois (System) receives and processes approximately 1,000-plus FOIA requests each year, many quite mundane but some potentially controversial for any number of reasons,” wrote Thomas Hardy, Illinois spokesman and FOIA officer, in an email.

In written responses, Hardy said requests were denied because the requested documents contained personal and private information. The University’s Office for Access and Equity conducts reports on misconduct claims.

Under the Illinois Freedom of Information Act, the public is entitled to receive documents from the state and local governments unless they fall under certain exemptions.

The recipient of a request is supposed to provide the records within five business days. The government agency may ask for an extension of five business days, or the agency may deny the request. If denied, the filer has 60 days to ask for a review by the state attorney general, which can be a lengthy legal process.

“We follow the law by reviewing responsive documents in the context of applicable exemptions to FOIA and a commitment to transparency. We make good faith decisions about FOIA exemptions that may apply to certain documents, and if the requestor disagrees they can appeal to the Public Access Counselor of the Attorney General’s office,” Hardy said.

The Daily Illini is considering pursuing a review by the attorney general.

“The Freedom of Information Act is really central to figuring out what the government is doing and keeping them accountable for their actions,” said Daniel Jeon, Jack Nelson/Dow Jones Foundation legal fellow with the Reporters Committee for Freedom of the Press.

Mike Hiestand, the national Student Press Law Center’s senior legal counsel, said access to public records is essential for journalists and the public to do their work.

“We’ve decided in this country that the government belongs with the people. FOI laws are one of the more important ways that we have of tracking what those government officials are up to,” Hiestand said. “It’s a constant fight, and obviously, some schools are worse or better than others.”

Michigan State University, for example, has withheld public documents relating to former sports medicine doctor Larry Nassar’s high-profile case. At one point, it sued ESPN for requesting the records, but a court dismissed that lawsuit. Nassar was convicted of sexually abusing athletes and his neighbors.

After taking a five-day delay, the University declined to provide the records. “The documents responsive to your request total more than 500 pages and contain highly sensitive information such as student names and other information that if disclosed, would be highly personal or objectionable under section 7(1)(c),” the denial stated.

The former East Asian Languages and Cultures professor had alleged assault complaints that dated back 20 years, according to posts that rapidly spread on Chinese social media. He announced his plans to resign in late March after news broke, and resigned Aug. 16 from the University.

A new request asking for complaint information regarding only the number of harassment claims filed was submitted on Oct. 18, and it was denied.

Hardy responded to that request by writing, “Please be advised that your request is not a specific request for records and therefore, the University is not required to respond to under FOIA.”

When asked for further explanation, Matthew Rogina, the assistant FOIA director for the University system, said the University denied the request because it asked for numbers and not a list of specific complaints. He said it would not fall under the FOIA request.

The Daily Illini then asked for a final report with identifying information redacted on Nov. 10. It was denied under the following exemptions:

140/7(1)(c) that exempts from disclosure “(p)ersonal information contained within public records, the disclosure of which, if disclosed, would constitute a clearly unwarranted invasion of personal privacy, unless the disclosure is consented to in writing by the individual subjects of the information.”

140/7(1)(n) which exempts from disclosure “(r)ecords relating to a public body’s adjudication of employee grievances or disciplinary cases; however, this exemption shall not extend to the final outcome of cases in which discipline is imposed.”

Hiestand said it may be the case that the investigation may have stopped mid-stream, as Xu resigned from his position, or discipline may not have been imposed on Xu.

“One thing I can say is that this whole #MeToo controversy has become a major story on America’s college campuses and schools are definitely very reluctant to provide information to reporters,” Hiestand said. “And student reporters have had to kick and scream to assert their rights. It needs to change, and it’s very very frustrating for all of us who are on this side of the business.”

The University delayed two other public records requests on another professor in the College of Liberal Arts and Sciences, which The Daily Illini filed after receiving an anonymous tip. The original request was filed Oct. 18, delayed and then denied Nov. 2.

The Daily Illini re-filed its request on Nov. 10 and asked for final reports on disciplinary action. It was denied Nov. 14.

The University system has maintained some transparency by creating a Freedom of Information Act log on its website, which provides a database of each public records request and the response letters. But the log hasn’t been updated since July 2017.

When asked when the log would be updated, Rogina said, “We are working to update it.”

Hardy said staffing issues and “some other issues” were to blame for their “falling a little bit behind on the log.” He added, “It’s one of our priorities.” However, Hardy couldn’t say when it’s going up.