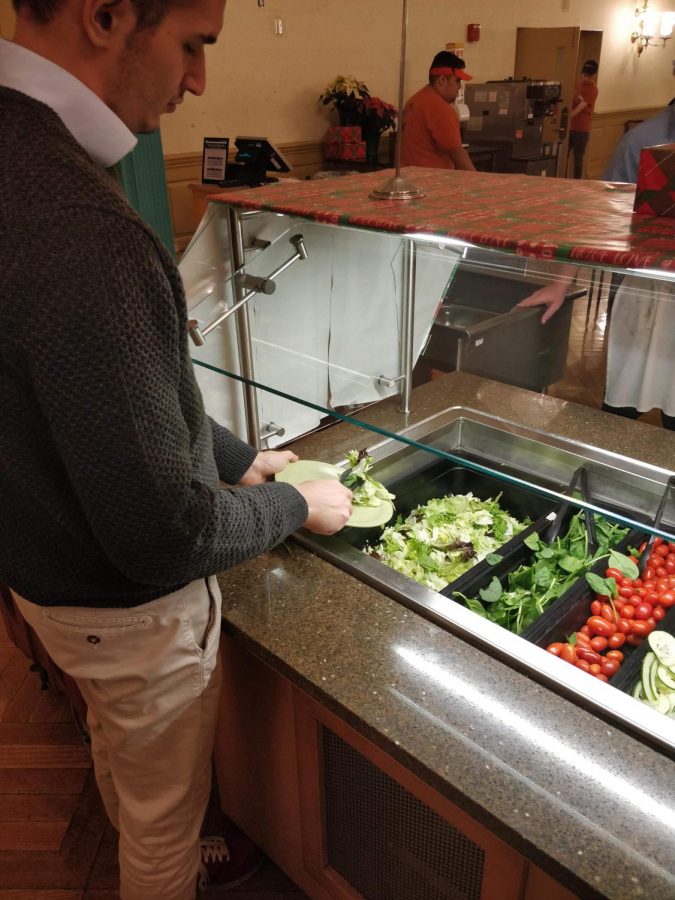 Lorenzo Molinari, junior in LAS, takes lettuce from the salad bar at Illini Union Dining Hall on Monday. Romaine lettuce has been taken off menus due to a recent E. coli outbreak.

University Housing has eliminated all romaine lettuce from dining halls, and students will not see its return until the spring semester due to a recent E. coli outbreak.

The Centers for Disease Control and Prevention reported Nov. 26 that public health and regulatory officials in several states, Canada and the U.S. Food and Drug Administration were investigating a multi-state outbreak of E. coli infections linked to romaine lettuce grown in the central coastal regions of northern and central California.

Chelsea Hamilton, senior assistant director for communications and marketing for University Housing, said they were not shocked by the news and have a standard operating procedure in place for these situations. Once the warning was announced, University dining removed all the romaine lettuce in its possession.

“We also work very closely with Central Illinois Produce, they were able to call us and send us an email to let us know about the issue that was happening with romaine lettuce,” Hamilton said.

“We are serving other types of lettuce that we carry instead,” Hamilton said.

The CDC advises consumers to stay away from romaine, especially if they don’t know where it is from and if it is not labeled by the harvest growing region.

Harvest growing region labels may not be available for some time, according to the CDC.

Even though the hold was lifted on Nov. 26, University dining halls will not serve romaine lettuce until the spring semester.

“Talking with our dining team, we will not serve it until mid-January just for extra precaution, as well as making sure students feel comfortable living here again,” Hamilton said.

Hamilton suggests students report to the McKinley Health Center if they suspect they are ill. If a student contracts E. coli, McKinley would communicate with housing and they would pinpoint which of their halls the bacteria may have come from.

Kristina Valdez, freshman in DGS, became aware of the E. coli outbreak when she went home for Thanksgiving and two restaurants she visited were not serving salad.

“Even though I don’t eat salad often, I think it’s good getting rid of it if it’s harming people,” Valdez said. “Once it goes away, I’ll eat salad, but for now, I won’t eat any salad.”

University Housing did not make any further announcements regarding the issue besides a food alert sign in the salad sections of dining halls. Hamilton said this is because the dining halls don’t serve a lot of romaine lettuce and did not want to promulgate the issue.

“The only time we serve it is when we are having our chicken Caesar salad,” Hamilton said.

Alexa Soto, freshman in LAS, said she was not aware of the situation and does not have all the information on this issue. However, she would certainly change her diet and look for other vegetarian options in place of salads.

“I like the idea that there is a poster in place right now, but I have to look at the poster. I did not see it,” Soto said. “If it is in red then yeah, red is an eye-catching color, but also an email would be nice. I read my emails.”