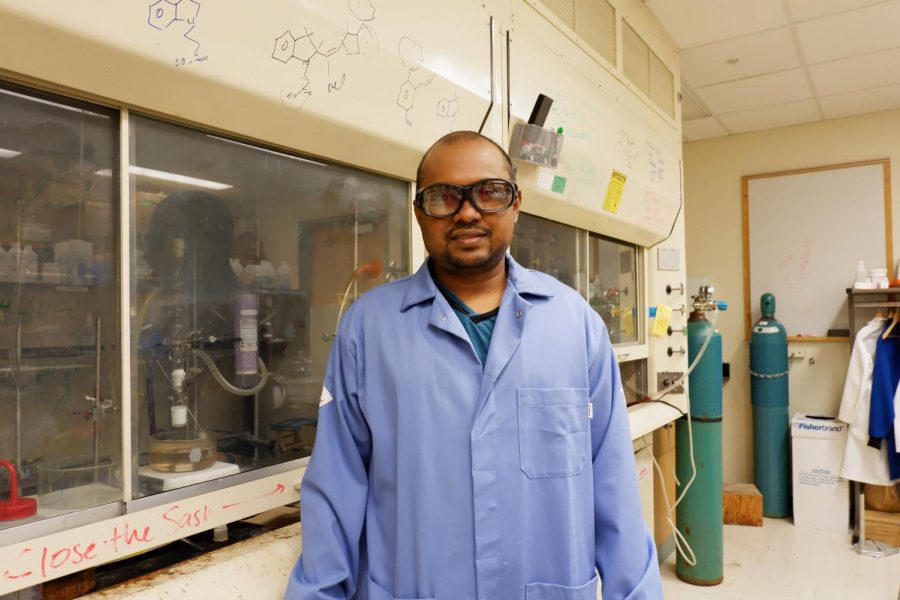 Mohammad Amdad Ali in his lab at the Beckman Institute on Monday. Ali is a postdoctoral researcher working on the sensor.

University researchers have created a sensor the size of a stamp that can be used to detect small amounts of chemical warfare agents, including sarin.

Sarin is an agent that is man-made and can be spread in gas or liquid form. Exposure to sarin can cause damage to the respiratory system, muscles, glands and may even result in death.

“We can do early detection of sarin-like molecules because sarin is very toxic and can kill humans if exposed to a high amount, but if we’re exposed to a low amount, it gives nonspecific symptoms,” said Mohammad Amdad Ali, postdoctoral researcher and first author of the research.

This means when a patient is exposed to low levels of sarin, the symptoms they experience are not specific to sarin exposure alone, making it difficult to treat.

“If we can detect the molecule at the early stage, we could treat the patient, and we can prevent any further damage or permanent damage,” Ali said.

This research was led by Paul Braun, professor in Engineering and director of the Illinois Materials Research Laboratory, and was published on Nov. 1 in ACS Omega.

The research in the paper is based on previous research done by Braun that has been going on for the past six years. That research resulted in the creation of a hydrogel surface that draws molecules to a sensor for sarin detection at the rate of one centimeter per hour.

Braun’s new research speeds up the process by allowing the molecule to be broken up into smaller particles. Now, the sensor can detect sarin-like particles in 10 minutes.

“If we detect this level, we can prevent future damage of exposure,” Ali said.

Researchers cannot use sarin in the lab as it is highly toxic, so instead, similar molecules, which are less toxic, are used.

Soldiers and citizens in areas prone to sarin-exposure can wear these patches in the future as a precaution in Syria, and it may save lives.

This project is U.S. based, and researchers have not collaborated with any other countries. Research was funded by the Department of Defense and the Defense Threat Reduction Agency.