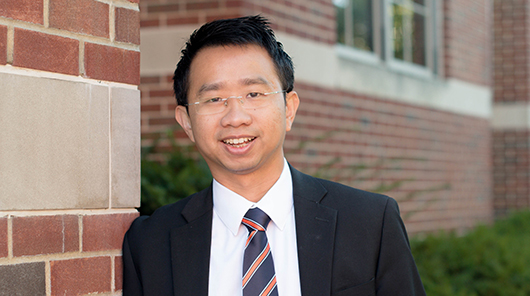 Kevin Tan is an assistant professor in the School of Social Work. He conducted a study that looked at substance use in boys.

Boys who enter sixth grade with social problems are at a greater risk of developing aggressive behavior and engaging in substance abuse compared with boys without social difficulties, according to a study by professors of social work.

Kevin Tan, lead researcher, said the background for his work into this study was his time as a social worker working with students who had emotional difficulties.

According to the study, 2,600 students from 37 schools located in the four cities of Chicago; Durham, North Carolina; Richmond, Virginia and Athens, Georgia were surveyed.

The survey measured their levels of aggression and use of substances during four-time points starting in the fall term of sixth grade and ending in the spring term of eighth grade.

Teachers also monitored each boy’s social skills, development, symptoms of anxiety and learning problems. The study found boys who had problems with each of these areas were the most likely to engage in substance abuse and aggressive behavior.

Tan said these last two groups presented more nuance than the first two, suggesting these social-emotional screenings should be done on students who present themselves positively.

“If we see a young boy with, like, really positive social skills, we should probably screen and understand about their risk behaviors, you know, they may be possible to increase their aggression and substance use, but that may not be easily seen by us,” Tan said. “They may be able to find a way to portray themselves as the nice, ‘goodie’ kid you know, but at the same time, they may be engaging in risk behaviors as well.”