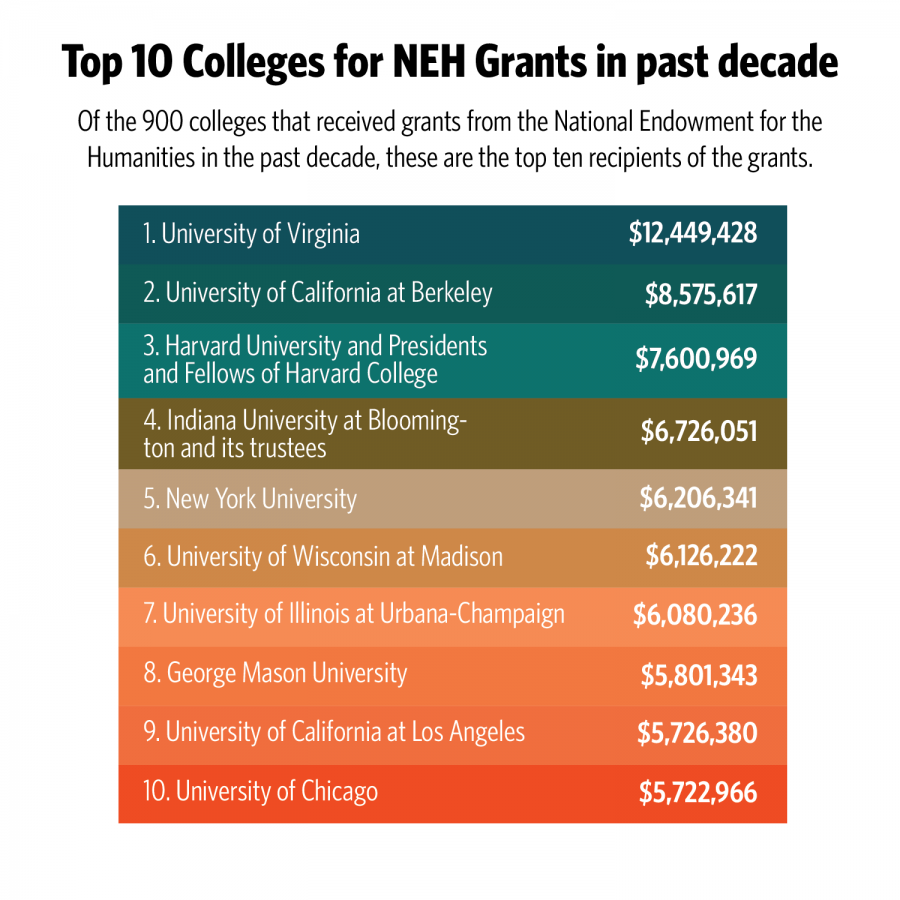 Source: The Chronicle of Higher Education

Data from the National Endowment for the Humanities revealed the University ranks 7th out of approximately 900 colleges for the number of NEH grants received since 2008.

NEH is a federal agency which serves as one of the largest financers of humanities research and programs in the United States.

The University had 55 project applications approved for funding by NEH from 2008 to September. The cumulative grant amount for the projects comes to $6,080,236.

The data was compiled by Ruth Hammond, senior editor of The Chronicle of Higher Education.

“I compiled all of the grants for each college and then I looked at which colleges had gotten at least a million dollars in grants in the past decade and those were the ones that I gave more details about,” Hammond said.

Hammond said she obtained the data from a database through NEH.

“I actually spent quite a few hours with analyzing the data to make sure I didn’t have duplicates and just did a lot of hand-analysis and sorting in Excel,” she said.

Hammond organized the data into a table published in The Chronicle of Higher Education. The table includes the name of each university, its rank and the amount of approved awards and number of funded projects in the last decade. It also includes information on the project from each institution that was awarded the most grant money.

“I wanted to give a general idea of what kind of things are people doing with this money from the National Endowment for the Humanities and what’s the value we’re getting from it. That’s why I included the links as well, so people could look at some of the projects and see results,” Hammond said. “Of course, I didn’t have room to list every one so I picked the largest one.”

Of the 55 NEH funded projects at the University in the past decade, the largest grant was $1,409,137 for the digitization of Illinois newspapers.

“This experience has been invaluable to a number of former student workers who have gone on to pursue successful careers in libraries,” Rimkus said in an email.

Rimkus said each time his team applies for an NEH grant, they propose a slate of newspapers to digitize along with a budget and plan of work.

The applications are then sent to the National Council on the Humanities which is made up of individuals nominated by the president of NEH.

“After reviewing the applications, the council makes recommendations to the Chairman of the Endowment,” Wasley said in an email. “The Chairman takes into account the advice provided by the review process and, by law, makes all funding decisions.”

Occasionally, as in the case of Rimkus’ project, the approved grant amount differs from the amount awarded.

“This may be for a variety of reasons. For example, if the scope of a project changes a grantee may submit a revised budget after the grant has been approved for a lesser amount,” Wasley said. “Or some grants, particularly NEH challenge grants which require matching funds, are disbursed over several years, so for ongoing the amount ‘awarded’ is recording what has been disbursed to date toward the total approved grant award.”