Top 5 moments of the semester 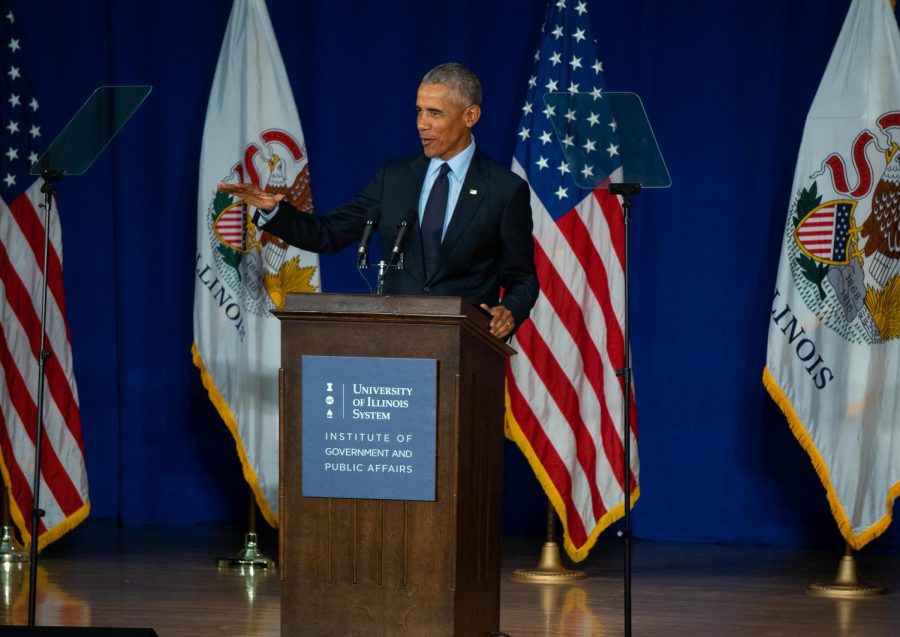 The Fall 2018 semester is coming to an end. Before students switch gears to enjoy the holidays and winter break with family and friends, it is time to look back on the memorable events that happened on campus over the past semester.

Former President Barack Obama made an appearance on campus to receive the Paul H. Douglas Award for Ethics in Government on Sept. 7. As part of his trip to the University, Obama gave a speech to students at the Foellinger Auditorium.

Although only fewer than 1,300 students were randomly selected out of a pool of over 22,600, the speech was live-streamed online for those who couldn’t be there in person.

During his speech, Obama addressed issues regarding the current administration, discussed the consequences of “sitting on the sidelines” and urged students to vote in the 2018 midterm elections.

After the speech, Obama also made a surprise visit to Caffe Paradiso, a local coffee shop, and interacted with the owners and patrons before leaving with an order of black tea and tiramisu.

The 2018 midterm election took place on Nov. 6, and the various polling locations on campus saw a record-breaking number of voters.

Starting Nov. 5, the Illini Union polling location, which is one of the two busiest locations in the county, had lines that wrapped around multiple flights of stairs.

Some locations had students lining up as early as 9 a.m., while others maintained a shorter wait time throughout the day. Various organizations on campus were also encouraging people to vote by offering snacks to those waiting in line.

The voter turnout rate for Champaign County was over 64 percent.

As students return to school from summer break, some were surprised by the closing of The Clybourne and Firehaus, two popular campus bars located on Sixth Street. A 17-story high-rise will take over the space, with the upper levels as residential space and the first floors as a commercial area.

Former-owner of the two bars, Scott Cochrane, said the beloved traditions of the two bars will be incorporated into KAM’s, another campus bar located on Daniel Street acquired by Cochrane and associates over summer break.

The demolition of the building that housed Cly’s and Firehaus has been underway since Dec. 7.

However, new players were also added into the campus bar scene as students say goodbye to the two staples. After nearly a year of construction, the revamped Illini Inn opened its doors to campus on Aug. 22.

The now-three-story bar carries on its old traditions, such as the Mug Club, where patrons who are over 21 can chug a beer, ring a bell, sign the Mug Club book and recite their membership card number at the end of the night to join the club. The tradition has been going on since the 1970s.

The University announced free tuition will be offered to in-state students whose family income is below $61,000 starting Fall 2019 through an initiative called the Illinois Commitment.

The program will cover tuition and fees for all four years for qualified freshmen and three years for all qualified transfer students. A total of $4 million will be allocated from institutional support and private donations for the tuition assistance program.

Students who are qualified for the program will also be considered for additional financial aids to cover the additional educational expenses, such as room and board and school supplies.

However, existing students who meet the criteria will not be included in the program.

University tenured law professor Jay Kesan was sanctioned for sexual misconduct accusations by three accusers, including a former law student and two professors who are no longer at the University.

The accusations were made public after an investigation report from September 2017 was obtained by Illinois Public Media through the Freedom of Information Act.

Following the publication of the report, the Student Bar Association signed a petition for Kesan’s resignation. Kesan will be going on a one-year unpaid leave and will be receiving counseling.