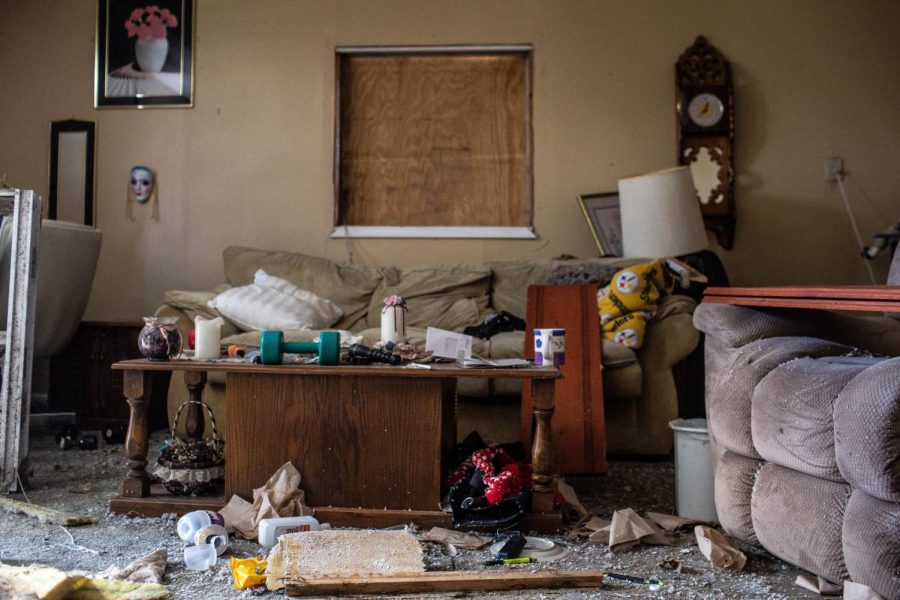 The supercell storm had already unleashed four tornadoes by the time it lurked southwest of Morrisonville, Illinois, a town of 1,000 where Alex Brockamp was home visiting family for the weekend.

The overcast, drizzly and unusually warm 60-degree day would see 29 tornadoes touch down across Illinois, making Dec. 1 the largest outbreak of December tornadoes since the 1950s. Morrisonville and Taylorville, Illinois, two rural towns where University students and their families live, lay in its path.

Brockamp, junior in Engineering, stayed in the house alone to write a lab report, looking forward to the forecasted rain so he wouldn’t have to rake the leaves in the yard. His mother headed to the church to take pictures of his sister, a senior in high school, and her group in their homecoming outfits. His 94-year-old grandmother lived alone in her one-story house, a five-minute walk across town.

At 4:39 p.m., the tornado sirens sounded for the first time.

The local news station warned the storm would hit Morrisonville in fewer than 10 minutes and Brockamp’s mind swirled with questions.

Should he get in his car and drive somewhere — anywhere — away from the storm? Were his parents and sister still outside the church taking pictures of her in her homecoming dress?

The sky darkened and he heard the dull thuds of hail bouncing off the roof as he hurried down to the basement. Between the overcast sky and setting sun, he could hardly see. He turned up the volume on the basement TV.

Was the sound he heard lashing against his house hail or tornado-force winds? Did his grandmother fall on her way to the pantry, the only windowless room in her house? Should he drive across town and wait out the storm with her? Would he make it to her house before a tornado hit?

No tornado touched down in Morrisonville. Instead, the storm rolled northeast toward Taylorville, 13 miles away.

Brent Frump, senior in ACES and Taylorville native, watched the Alabama-Georgia football game from his house in Champaign. When he heard about the tornado warning, he called his mother and sister, who scrambled to take shelter in a friend’s basement after the sirens went off.

Brendan Held, junior in Business, was visiting his family in Taylorville for the weekend and prayed for his town alongside his brother and parents from downstairs in his basement living room.

Paul Held, Brendan’s uncle and athletic director at Taylorville High School, told his wife the storm would fizzle out before it came into town.

Jim Brown stood on his daughter’s front porch, about 10 blocks away from his own home, when the gray, swirling mass broke loose from the sky. His daughter had a basement, but he wanted to watch the tornado.

The main gas line ruptured and the smell of rotten eggs and the rushing, freight train-like sound of the tornado filled the air. Brown, a retired carpenter who has lived in Taylorville since the first grade, knew his home wouldn’t survive.

“It was going to tear the hell out of the place,” he said.

When the tornado sirens blared, Brandon Gatton, another Taylorville resident, brushed aside his mother’s plea for him to come inside. He said he and his friends used to watch twisters race across the fields and roar down Route 48. They never hit Taylorville.

The eerie warmth and the low reading from his barometer unnerved him, though he didn’t expect anything more than a bad storm.

His mother called again, this time crying. Gatton relented, leisurely unplugging his computer and gathering batteries for his vape pen before heading to her house.

Gatton said he tasted the dust in the air as soon as he stepped outside of his garage.

“I tasted it coming,” he said. “The air tasted terrible.”

He hurried inside his mother’s house and shepherded her and the three dogs into a hallway.

The power went out.

Back at the high school, Paul Held’s panicked calls wouldn’t go through to his wife.

The school had canceled the girls’ basketball game he’d planned on attending, and as the weather worsened, he ushered the students into the main hallway. Hail smashed against the windows and his ears popped as he felt the pressure change roll through his body.

His wife had sent him a text telling him the tornado had touched down in Taylorville, and now without a response from her, he imagined the worst.

Snippets of everyday life flashed before him: He remembered sitting on the front porch with his wife, drinking amaretto and listening to music playing from the portable speaker, family trips to Saint Charles, Missouri, and watching “The Big Bang Theory” on his couch with his kids.

At his mother’s house, Gatton looked out the back door window as a bright green flash from an exploding transformer lit up the tornado’s silhouette, less than a football field away from him.

The window Gatton had spotted the tornado through smashed into the back of his head as he tackled his mother to the floor, shielding her with his body.

The windows exploded and the floorboards shifted underneath them.

“Oh my God, this is it,” his mother screamed, again and again.

“It’s fine. We’re going to be OK,” Gatton reassured her, though he didn’t believe it.

Pieces of two-by-fours impaled themselves into the wall above them, the splinters piercing through the top of his black beanie. His ears popped. As the windows shattered and debris flew through the room, the tornado itself sounded like a train barreling toward him.

“It was an ungodly roar,” he said.

Tufts of yellowing insulation clung to trees and bushes on the road into Taylorville. At the epicenter, walls, roofs and porches lay crumpled on the ground and uprooted trees blocked the roads.

Brockamp waded through waist-deep water as he tried to unclog the drainage ditch in his Morrisonville home. Even with the hail, his house, along with Frump’s, Held’s and the high school, remained largely undamaged. Because of the storm, his sister and her homecoming group skipped the fancy dinner they’d planned before the dance and packed into Brockamp’s home instead. His family ordered pizza.

As Brockamp cleaned the kitchen and living room, preparing to host a dozen high schoolers, pictures of destruction in Taylorville filtered in through Facebook: a flag pole bent in half by the 155 mph winds, a Wendy’s sign plowed into the ground, and scores of homes leveled.

The tornado, a half mile wide, had torn through the south end of town, injuring 26 people, three critically. None died, which residents attributed to the second warning siren, a tornado emergency, issued by the National Weather Service and the 41 minutes of lead time between the first siren and the tornado touch down.

Gatton tore out of his mother’s house before the tornado had even disappeared, wanting to check on his friends and neighbors. Though the sun had set, lightning illuminated the silhouettes of buildings.

One friend’s home was missing a roof. Another’s home was gone entirely.

Gatton’s garage, where he ran his business, was obliterated, the walls collapsed. He found his loaded handgun flung on the floor. He found his Marine Corps medals and monster truck tires six blocks away. The dashboard of one of his cars smashed through the rear window. A vintage guitar, passed down from his father, coated in dust and mud, the frets snapped.

“I’m at awe. I can still see everything the way it was,” said Chris Evans, Gatton’s friend, as he looked around the muddy space where the garage used to be.

Less than an hour after the tornado battered the town, scrappers started looting the collapsed houses, trying to steal one of Gatton’s car hoods and stripping the wires off a friend’s house.

“No one on the street slept that night,” Gatton said.

He spent the night walking with his gun in a hip holster, finally going to sleep at 6 a.m., lying down in an old equipment van, his heart racing when he heard the wind blow against the blue tarps covering the shattered windows.

He kept his .45-caliber handgun by his side in case another looter came.

Neighboring Gatton, the house Brown lived in since the 60s was uninhabitable, the floor sprayed with broken glass, the windows packed with aluminum foil or boarded shut. He became emotional describing raising 12 children in the house, playing softball games every Sunday and over a decade of coaching Little League baseball.

“There’s a lot of memories,” he said.

The bedroom he had slept in alone since his wife died 10 years ago sat dark, damp and empty. An entire wall shifted out so much that he could see grass from inside.

He didn’t know whether he’ll be able to rebuild or have to move to a new house.

A block away from Gatton’s garage, his friend, Rod Sheedy, stood in the ruins of his shop with watery eyes.

“He’s one of the toughest men I’ve ever known in my life,” Gatton said. “And he even broke down and cried.”

Marie Sheedy, his mother, said he’d cried every day in the week following the tornado.

The building, over 100 years old, used to be a train depot for Taylorville’s coal mine. It sat abandoned for years until Sheedy bought it in 2008, converting it into a private shop where he could work on his truck.

Gatton brushed the snow off a concrete plate reading 1916, the year the building was built. Gatton said Rod cried when he discovered the plate resting on top of the rubble. Rod called the plate his gravestone.

Rod said he loved everything about his shop. The crane he used to carry motors. His welding machine. His truck. Much of them lay mangled by the wind, smashed by falling debris or buried in the wreckage.

The tornado blasted through his shop while he vacationed in the Dominican Republic. When he returned to Taylorville after dark on Dec. 2, he immediately grabbed a flashlight and drove into town to see what remained.

The building, too old to be insured, crumbled into mountains of loose bricks, the equipment he spent 30 years gathering buried beneath it.

Wearing jackets dark with mud and dirt, Rod, his friends, family and neighbors helped him clean up the shop before he rebuilds or sells it.

Volunteers passed out bagged lunches and plastic foam cups filled with hot chocolate. People donated so many clothes, toys and food, the Red Cross ran out of place to store them, prompting Taylorville officials to ask only for monetary donations.

Gatton breathed out a plume of vapor in the subfreezing weather and tucked his vape pen into his puffy jacket. Gatton and Evans had been working 14 hours a day, seven days a week cleaning up their own property and helping Sheedy.

“I’m looking around, I’m seeing my neighborhood, and I’m seeing the place where I grew up. I’m seeing my friends and family suffering.” Gatton said. “When it happens to your own family, it just becomes all too real.”

Sheedy, his eyes red, pressed his lips together and paused.

“We’ll figure it out. Somehow,” he said.