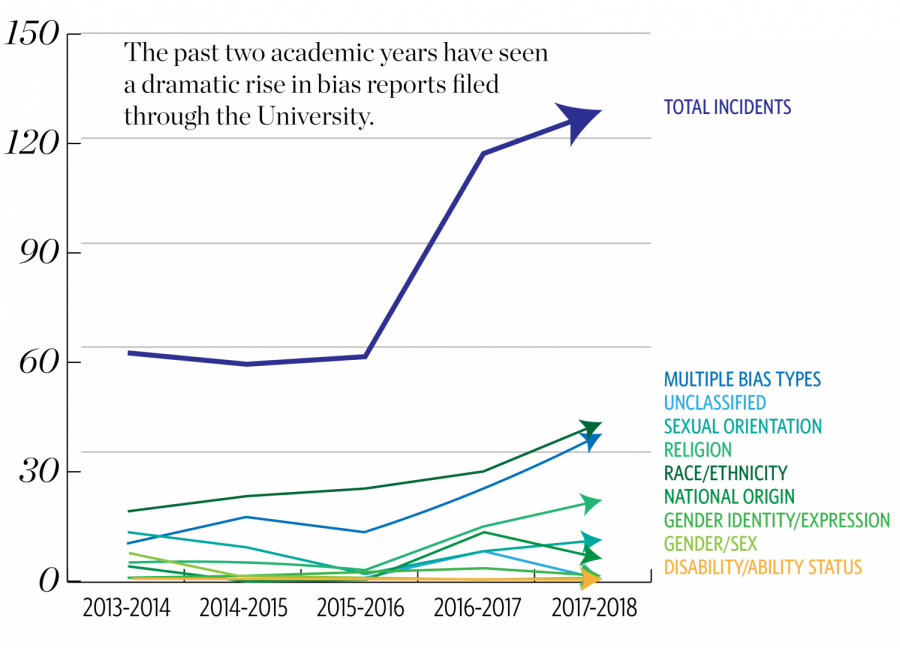 A social media post from the University police is encouraging students to report “acts of intolerance” to the school’s Bias Assessment and Response Team.

The Bias Assessment and Response Team are accommodated within the Office for Student Conflict Resolution at the University. This team collects reports of bias-motivated incidents that impact students and publishes data regarding the incidents that were reported. Private information, such as a student’s full name, is not publicly announced.

Bias is defined as “inclination or prejudice for or against one person or group, especially in a way considered to be unfair,” according to the Oxford Dictionary.

According to BART, bias-motivated incidents that are reported to the team are “actions or expressions that are motivated, at least in part, by prejudice against or hostility toward a person (or group).” These discriminatory expressions can include age, disability, ethnicity and gender. Additionally, BART focuses on the protected categories listed in the University’s non-discrimination policy.

BART reports are handled by their team and are submitted by students. Students are then immediately contacted by the team, and the co-chair to gather information. This team collects statistics about bias incidents that are taking place and gives everyone in the University community a resource if they are experiencing acts of bias.

Most of the cases do not rise to the level of a policy violation.  The members of the team work to be a resource both to the person making the report and to anyone who is reported.

January Boten, assistant dean of students and co-chair of BART, encourages students to report incidents that can help students’ safety. Some might disagree with the team’s ultimate purpose, but Boten believes otherwise.

“People are entitled to their opinion; however, I believe that students who are in any type of distress should have a resource, and the Bias Assessment and Response Team is a resource for people who experience bias-related incidents within our campus community. The University is encouraging students to reports bias-motivated incidents to BART and crimes to the police,” Boten said in an email.

Amanda Rivera, sophomore in Education, believes it is a step forward to make a change in our community, but it is not enough.

“It doesn’t help in changing ideas and perspectives of people like race and sexuality. Especially since it wouldn’t make it different to the person who faced the situation in the first place,” Rivera said.

Samantha Quiroga, sophomore in DGS, supports the purpose of BART, but believes there can be efforts added by our students to create change.

“I feel like this message would be as effective as a student allows it to be. The police are making an initiative for students to speak about it, but they can only do so much,” Quiroga said.

Boten hopes BART’s active presence will give students on campus who experience biased incidents a place to go to report what happened to them, getting students help sooner rather than later.