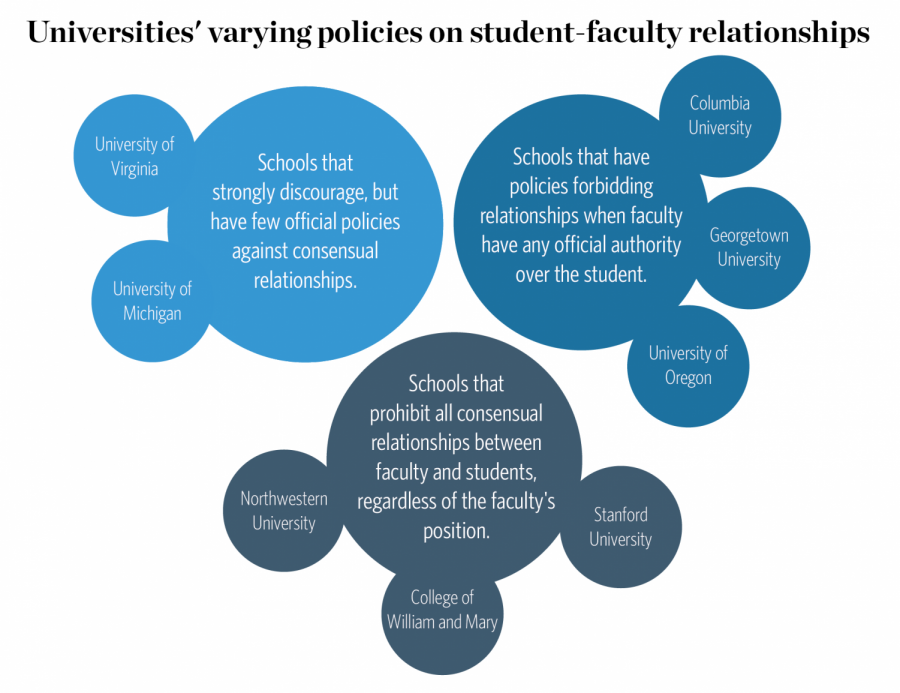 In the age of the #MeToo movement and increased awareness around misuse of power and sexual abuse across many institutions, the University has approved the creation of a committee seeking to review and revise its current policies about student-faculty relationships.

Jamelle Sharpe, law professor and chair of the committee, said the current policy in the University’s student code is more concerned with issues of nepotism and bias if a student is in a relationship with a faculty member with academic or supervisory authority over them.

“If there is such a relationship, a conflict management policy will be drafted to ensure that the faculty member is taken out of the line of supervision,” Sharpe said. “This is done to ensure that there isn’t an appearance of bias and academic integrity is upheld.”

Sharpe said the University decided to adapt quickly as other schools around the country changed their policies, rather than waiting for a problem or precipitating event.

“We looked at the experience of many of our peer institutions across the country, saw that they were reevaluating their policies in this regard and thought that we should be proactive in ensuring that the policies we currently have effectively serve our students and are consistent with our community values,” Sharpe said. “We decided to undertake a study of those current policies to make sure that they still work.”

Sharpe said the committee will take several weeks to study the issue by reaching out to those who University policies would affect most directly and then determining whether or not they need to be changed.

“We’re gathering as much information as we can about the consensual relationship issue,” Sharpe said. “That involves engaging with undergraduates, graduates (and) faculty to see what their concerns are and what kind of policy features they think would be most helpful to them.”

In his research, Sharpe found several justifications from schools who tightened their consensual relationship policies, one of which has to do with distinct power imbalances between undergraduate students and faculty members.

“Almost invariably, the assumption is that the power dynamics don’t allow the student to form meaningful consent,” Sharpe said. “Even if the student were to say that they entered the relationship with full knowledge and consent, the University has to assume that this consent can’t be genuine or meaningful.”

In addition to concerns over academic integrity and bias, Sharpe said some schools put strict policies in place when there is more than a professor’s reputation on the line.

“There is sometimes the fear that these relationships may become situations that allow for sexual misconduct of some kind that raises the possibility of legal exposure for the school and faculty member, so some schools justify their policies to avoid that outcome,” Sharpe said. “It may be that the relationship started as consensual but only one party consented by the end, it may be that there was no actual consent in the first place and it was always coercive, but the faculty member either didn’t know that or didn’t accept that.”

Sharpe said the committee plans to reach out to students and student groups on campus to raise awareness of the risks of these relationships as well as to receive feedback on what policies would make students feel the most safe.

“It’s an opportunity both to learn more generally about the issue and also to give feedback to the committee so members fully understand what your concerns are and the ways that you think the school should be protecting you,” Sharpe said. “That’ll be an important factor in how the task force evaluates our current policies and, if we decide that we need new ones, what those policies will look like.”