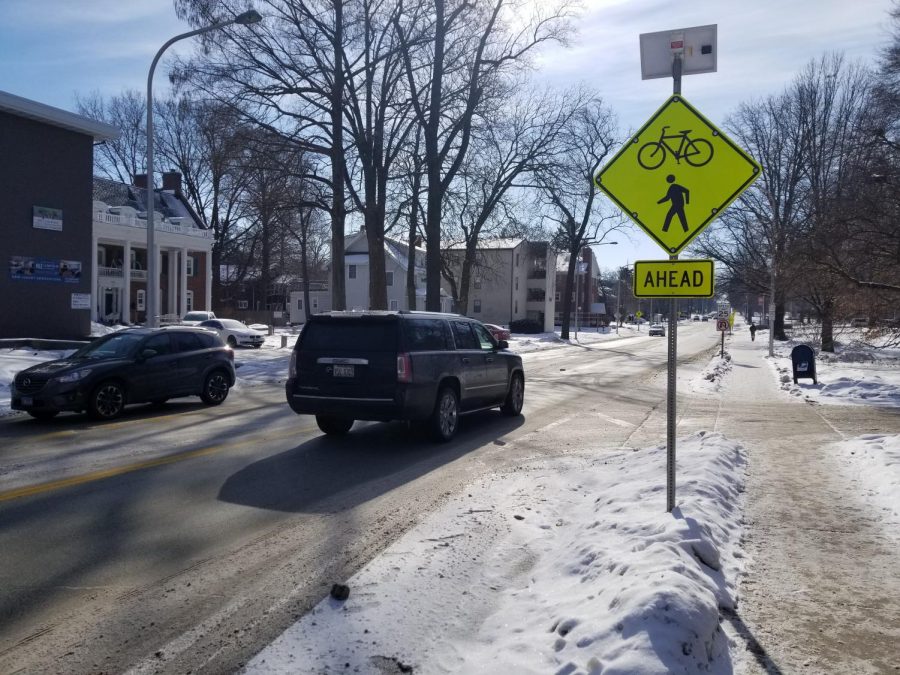 New pedestrian signs with flashing lights are installed on Lincoln Avenue to ensure traffic safety in areas with high levels of pedestrian activity.

Over winter break, two flashing pedestrian crossing signs were installed on the north and south ends of Lincoln Avenue to increase safety in the area.

Craig Shonkwiler, assistant city engineer in the Public Works Department in Urbana, said the flashing signs were installed to warn motorists the corridor has a high level of pedestrian activity.

The flashing signs were activated Jan. 14 and will operate Monday through Friday from 9 a.m.-5:45 p.m. during the fall and spring semesters. The enhanced signage installations were approved by the Urbana City Council.

According to the city of Urbana’s website, “the timing of the sign operation is based upon high pedestrian volumes, which were measured during a traffic study along the corridor.”

The traffic study also provided crash data from 2013 to 2017. Results showed of the 73 total crashes, more than 58 were rear-end crashes, seven involved pedestrians and one involved a bicyclist.

Bill Brown, member of the Urbana City Council and chairman of the Bicycle & Pedestrian Advisory Commission in Urbana, said the council had been discussing the idea of building more pedestrian crossing signs for a while.

Brown said he thinks Lincoln Avenue has many accidents and is difficult to cross because it is one of the main entry points to campus from both ends. Also, people who commute across town commonly use this street.

An earlier attempt to increase safety in the area was the reduction of the speed limit along Lincoln Avenue to 25 miles per hour, which began in August. Although it helped drivers slow down slightly, the council is planning on conducting further research of the corridor and making more accommodations to the street to ensure even more safety.

“You can put up speed limit signs, but a lot of times, people don’t really notice,” Brown said.

Shonkwiler said the next step of the research is to decide whether or not infrastructure improvements, like curb bump outs or increased street lighting, would help mitigate crashes along the corridor.

“Upon the completion of the comprehensive corridor study, the city will be poised to apply for grants administered by the Illinois Department of Transportation specifically developed to address safety issues such as those on Lincoln Avenue,” Shonkwiler said.

Maya Gonzalez, sophomore in Education, is a member of Delta Zeta sorority and currently lives in the sorority house in Urbana. Gonzalez has to cross Lincoln Avenue to go to and from the house.

Gonzalez said she thinks putting up the pedestrian crossing signs with flashing lights can help people get across the street more easily. She said any way to make drivers more aware of pedestrians in the area can help improve safety.

“I only have difficulty crossing the street when I’m waiting several minutes for cars to stop,” Gonzalez said. “Sometimes they stop right away, but there’s always those people who just don’t stop for anyone.”