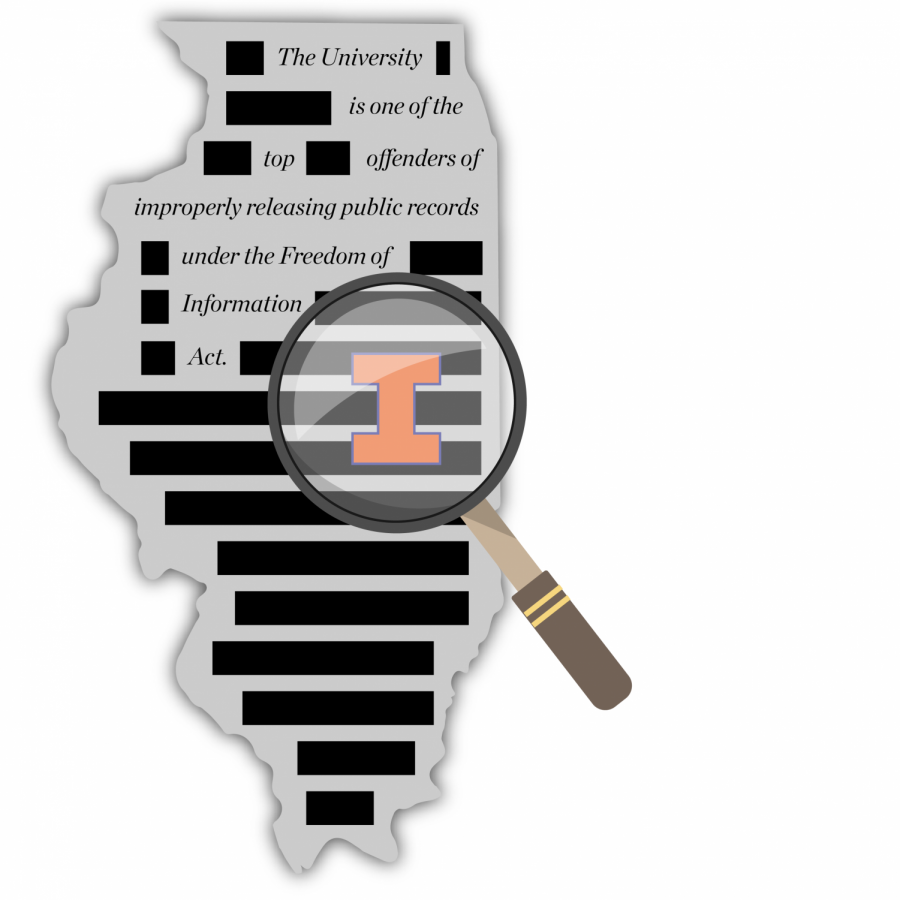 The University of Illinois has been found to be one of the top offenders for improperly releasing public records under the Freedom of Information Act and Open Meetings Act, according to a recent report by the Better Government Association, a nonpartisan watchdog group in Illinois.

The report stated that among the denied FOIA and OMA requests sent to the attorney general’s Public Access Counselor’s office for review, the University of Illinois improperly applied exemption rules 63 percent of the time. Exemptions allow public bodies to reject FOIA requests and prevent disclosure of information.

The PAC office, which consists of 13 full-time lawyers, three supervisors and four support staff, receives and decides on exemptions. In total, the BGA examined how the PAC office ruled on 28,270 FOIA and OMA requests for review from April 6, 2010, to March 15.

Thomas Hardy, University of Illinois spokesman and FOIA officer, wrote in an email the BGA does not explain the data reported very well.

“We don’t think it accurately reflects the totality of FOIA compliance at the U of I System, a highly decentralized organization with two major research universities that must comply with federal laws regarding student (FERPA) and patient (HIPAA) privacy, and interpret more than three-dozen state FOIA exemptions in the course of annually processing more than 1,000 FOIA requests and providing thousands of responsive documents to requestors,” Hardy said.

In written responses, Hardy said the BGA neglected to contact the University System before the release of its findings to inquire whether there are circumstances or context that might contradict those findings and more accurately reflect the system’s commitment to FOIA compliance in the letter and spirit of the law.

Annum Haider, civic engagement and research analyst at the BGA, said they broke down the available data to determine how often public bodies had or hadn’t violated FOIA and OMA, according to the PAC.

Hardy said, in addition to full compliance with FOIA in the letter and spirit of the law, the U of I System’s FOIA administrator conducts orientation sessions with administrative and academic units across the system, and all personnel engaged in processing FOIA requests take a mandatory online state training.

According to the report, the PAC office determined that public bodies administered incorrect exemptions 1,345 times — 30 percent of the times the PAC issued a substantive determination on an exemption claim. To get this number, the BGA divided the number of violations (1,345) by the number of Substantive PAC Exemption Reviews (4,559).

Haider said when someone believes their FOIA request has been falsely exempted, they can file a request for review.

“A public body can claim a FOIA exemption for a number of things, but there’s a lot of loopholes,” Haider said. “A regular citizen wouldn’t know what hit them, so that’s why the PAC office is there to investigate.”

If the PAC determines a public body improperly exempted a FOIA and that information was being wrongfully withheld, it is counted as a violation. Haider said some things that could cause a FOIA to be denied include the revelation of personal or confidential information, such as Social Security numbers, trade secrets or home addresses.

Haider said the PAC can reach out to the public body and advise to abide to the request; however, it’s up to the University to follow the advice. If a person whose FOIA request is denied really wants the information, they should file a lawsuit, she said. There are a lot of different ways to do or not do what the PAC office says.

“The University of Illinois System was a transparency pacesetter when it started posting a public FOIA log in 2009, the first public body to do so and well before the changes in Illinois FOIA,” Hardy said.

However, the log has not been updated since Spring 2017.

In the calendar year 2017, the University System received more than 800 FOIA requests and over 1,000 in 2018. Hardy said the log should be current within the next few months and the 2018 FOIA reports will be presented to the board of trustees meeting in March.

Hardy said a written report summarizing the year’s “FOIA activities” will also be presented to the board’s March meeting.

Editor’s note: The Illinois Attorney General’s Office did not respond in time for publication.