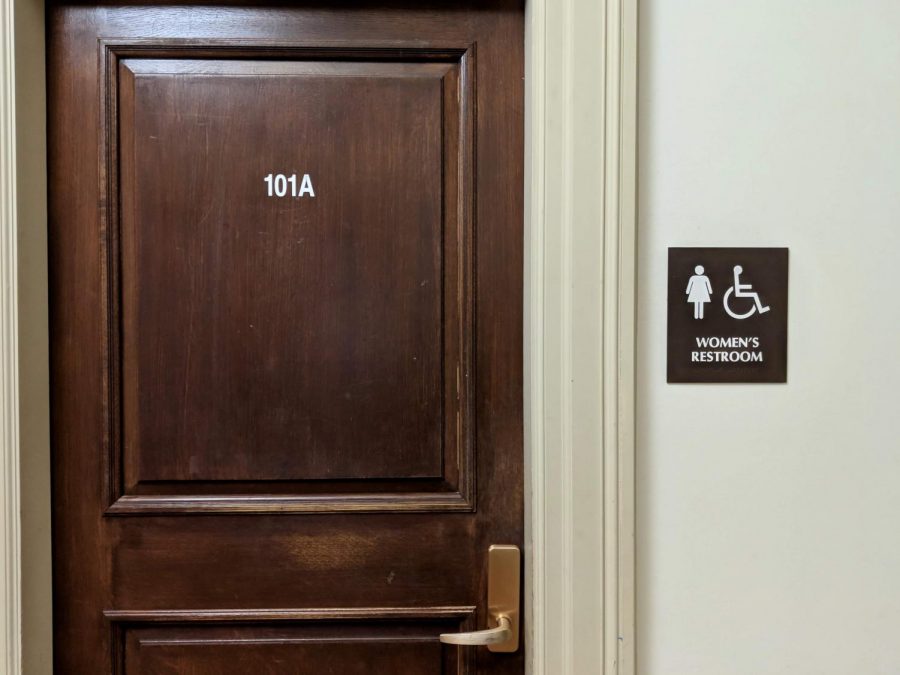 The women’s restroom on the first floor of the English Building.

For many years, if you are a female student studying Architecture, you might need to do some extra cardio just to use the restroom, as there was only one female bathroom on the first floor while male bathrooms were located on various different floors in the Architecture Building.

While the issue has been resolved after a renovation of the building, the overall disparity between wait times for men and women’s bathrooms has been a stagnant problem for decades now.

Kathryn Anthony, professor in Architecture, has researched this topic for years, even testifying before Congress when the issue reached the federal government for the first time.

“Places of assembly are usually where lines for ladies’ rooms are the longest,” Anthony said.

Often, public restrooms cannot handle large crowds all at once, whether that is during intermission at a musical or halftime at a basketball game, she said.

“Here on campus, that would include theaters at our Krannert Center for the Performing Arts and our football and basketball stadia,” Anthony said.

These locations aren’t the only long bathroom lines students experience.

“I normally study at Grainger library and it will take several minutes of waiting for the women’s bathroom (on the second floor),” said Yinyin Chen, second-year graduate student in LAS.

On campus, female students are lucky to even find the bathroom in some cases.

The first female students attended the University in 1870, but the school was still predominantly male.

Kathryn J. Oberdeck, professor in LAS, said universities and institutions would assume facilities would mostly be used by men. Even when numbers shifted to more female students, the bathrooms didn’t change.

“They don’t put a whole lot of effort into retrofitting them to have enough bathrooms for women,” Oberdeck said.

Though some states, including New York and California, have passed laws to improve the ratio of women’s to men’s toilets in public restrooms, including the number of urinals, these laws are not retroactive, allowing unequal access to bathrooms to continue in facilities built before the laws passed.

As is the case for a number of older buildings at the University, the restrooms are stacked on adjacent floors. Though equal by area, this is a poor way to measure the equity of restrooms, according to an article from The Atlantic.

“Physiologically, women have different kinds of needs, and it takes them longer,” Oberdeck said.

The University has made efforts to even out the ratio of men’s and women’s restrooms in buildings across campus, including the Natural History and Architecture buildings, as well as the State Farm Center, Anthony said. These all received major public restroom renovations.

“We should not be limited to previously existing assumptions about gendered use of bathrooms,” Oberdeck said.

“Unisex restrooms are an excellent way to address the need for potty parity,” said Anthony.

However, the solution to potty parity may not be a simple one.

“We need equity,” Oberdeck said. “Many people also need privacy. People need to feel safe. Sometimes we need bathrooms so people can assist other family members, young or old, who need help. All of those require somewhat different kinds of spatial arrangements. It’s an architectural and technological issue. But it’s not impossible.”