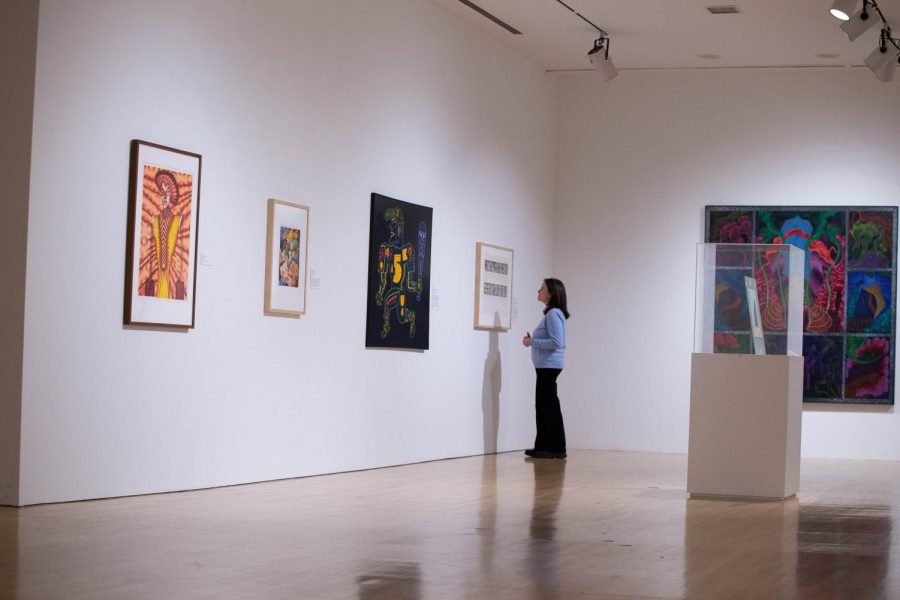 Julia Kelly looks at a painting at Krannert Art Museum’s “Between The Buildings” exhibit on Feb. 1, 2019.

The University of Illinois System has created a $2 million initiative aimed at celebrating the impact of the arts and humanities on the three campuses over the next two years.

After review by University of Illinois System President Timothy Killeen and other officials, 14 of the more than 50 proposals sent in by professors as part of the first-year Presidential Initiative to Celebrate the Impact of the Arts and the Humanities were chosen to receive over $100,000 in grant money.

The initiative subsequently upped the proposed $1 million in funding to $2 million as a result of what Killeen said was the sheer volume of strong proposals.

“The caliber of the proposals was inspiring, and the ideation that came out of it was very rich, detailed and also inspiring,” Killeen said.

Many of the projects incorporate digital technology such as virtual reality to enhance participation in theater performances, interactive exhibits to showcase innovations in Urbana-Champaign and a newly developed curriculum at the Carle College of Medicine to bridge humanities and healthcare for students.

Killeen said these projects demonstrate that the arts and humanities can easily merge and benefit from technology sciences rather than remain completely separate.

“We want our artists and humanists to explore and cross boundaries, and I think digitalization, networking, computation, simulation and robotics can all be components of the supporting infrastructure for these kind of initiatives,” Killeen said.

Kevin Hamilton, dean of FAA, said this phenomenon can easily be reversed and scientific studies often viewed as completely cold and logical can greatly benefit from creative thinking and knowledge of the humanities.

“Many of the large-scale efforts that see significant campus investment outside of our core academic programming — our new Carle College of Medicine, for example, or the newly planned investments in Data Science infrastructure — also carry great potential for including arts and humanities researchers,” Hamilton said in an email.

Hamilton said the quality and volume of responses to the initiative shows an Illinois arts community as ambitious and prepared as ever for investment in their projects.

“The funded projects, along with the many that were not funded, offer a good cross-section of the best of what’s happening in these areas on campus, and in these projects we see faculty working across disciplines and with public partners firmly in mind,” Hamilton said. “Arts and humanities faculty understand their research and creative work to be core to our world’s central challenges; with projects like these, they are rightly claiming that authority.”

Hamilton mentioned along with Killeen that showing attention and providing funding to more ambitious projects is also a great strategy to attract new faculty members with their own dynamic proposals.

“It’s important to keep in mind that this investment comes at a time when the arts and humanities have lost many good faculty to other institutions,” Hamilton said. “The past few years have been challenging in this regard, and the system investment is a good boost for morale and recruitment.”

Matt Rohan, freshman in FAA, said while other departments understandably require and receive more money, the arts and humanities can often feel left out from important funding that can have positive public impacts.

“Increasing arts funding can only benefit the University,” Rohan said. “Krannert Center actually was created by a famous engineer through donations, and he said at the time that this University needed a performing arts center more than another research facility because, ultimately, we bring something to the campus that it wouldn’t otherwise have.”

Rohan also hopes that with this specialty funding eventually comes more general maintenance for aging infrastructure so performances can benefit from the best facilities.

“Krannert Center is celebrating its 50th birthday this year, and a lot of the structures in the center are turning 50 as well,” Rohan said. “One year, there was a group of dancers that got stuck in a classroom because the door handle broke off.”

Killeen said that, if successful, these projects will be incredibly effective in connecting students to the importance and impact of the arts and humanities, no matter their interests or major.

“We’ve got an amazing legacy, and we want to build on that,” Killeen said. “Everything we do is about the student experience, so we want to see them participate and get involved in activities that celebrate the role of the arts and humanities across all fields.”