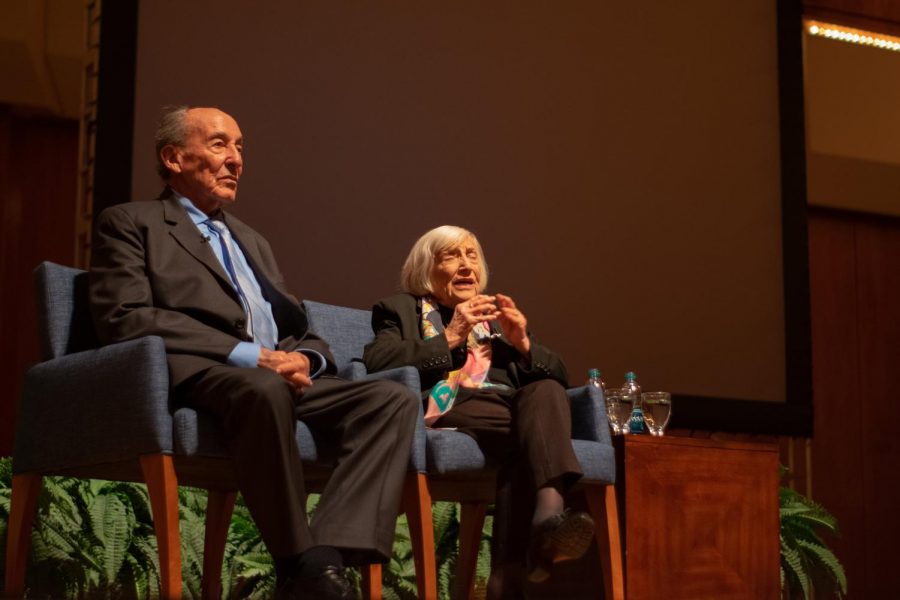 Marthe Cohn (right) in the Great Hall of the Krannert Center for Performing Arts on Feb. 13. She spoke about her autobiography 'Behind Enemy Lines: The True Story of a French Jewish Spy.

Marthe Cohn, a 98-year-old Holocaust survivor and World War II spy, spoke at the Krannert Center for the Performing Arts to discuss her experiences during the war Wednesday night.

With co-author Wendy Holden, Cohn wrote “Behind Enemy Lines: The True Story of a French Jewish Spy in Nazi Germany,” an autobiographical book about Cohn’s involvement in the war.

Among many reasons, Cohn said she wrote her book most importantly for her brother. Being the only member of her family with savings, Cohn’s brother was crucial in helping their family survive during the war. Cohn said she felt it was her duty to write about her experiences after her brother became ill postwar.

Cohn talked about her experiences working for a French intelligence service posing as a nurse, crossing enemy lines to pass on information about the Nazis to the French.

People at her talk learned one person could make a difference and everyone should be engaged in their lives, Cohn said.

Rabbi Dovid Tiechtel from the Chabad Center for Jewish Life wrote in an email the center places importance in educating people about the methods challenges can be solved and believes Cohn’s story can help bring people together to do just that.

“Today with so much challenge going on in the world, many wonder, what is my place, what can I do,” Tiechtel said. “Marthe was a young teenager in a time of struggle. Not only did she not just stand be, she took action, something we can all learn from.”

Tiechtel said each year, there are fewer survivors of the Holocaust, making it important for people to meet and hear from heroes like Cohn.

Robin Kaler, associate chancellor for public affairs, wrote in an email Cohn is on a speaking tour and was planning on traveling through the Midwest. The University and the Chabad Jewish Center invited her to make a stop at the University.

Traveling the world to share her story at 98, Tiechtel said her journey itself is a powerful statement.

“As one of the last living heroes of World War II, Ms. Cohn’s talk will be like jumping into a history book and watching it come alive,” Kaler said.