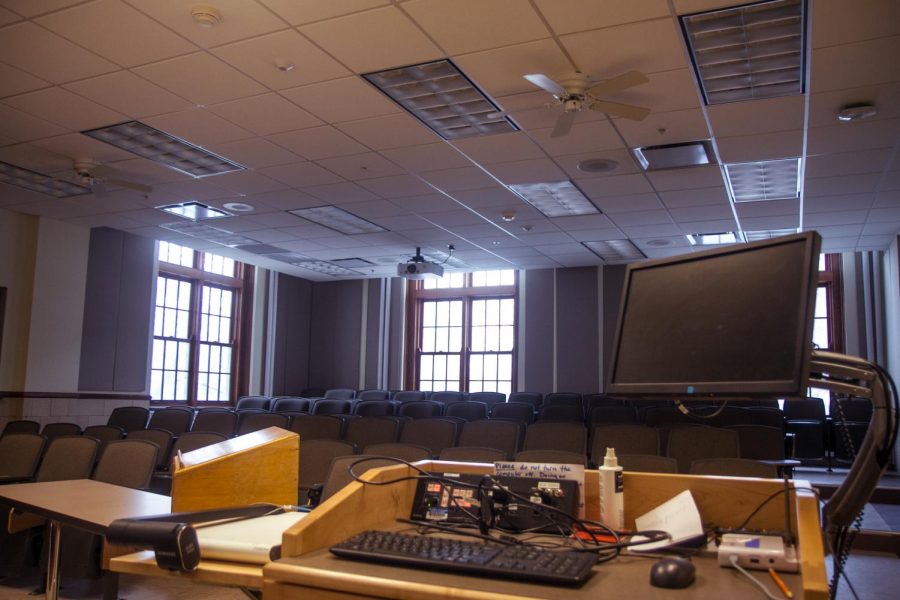 Members of the University’s Senate have responded to the online and in-person harassment of an outspoken professor with steps to prevent contentious in-class confrontations. However, there is still disagreement over whether these steps are strong enough.

Jay Rosenstein, professor in Media, has long been a target of online harassment becauseof his strong public stance against the University’s former mascot Chief Illiniwek, culminating in an incident in January 2018 where he was accused of following a supporter of the Chief mascot into a bathroom and filming him without consent.

Although Rosenstein denied filming the supporter and charges were dropped, outrage over the incident spread across online communities, with petitions calling for his firing and sites encouraging trolling and threats against the professor on social media.

The threats against Rosenstein became considerably more serious when one C-U resident who had attacked Rosenstein repeatedly online and in person during faculty Senate meetings enrolled in one of his Fall 2018 courses for the purpose of confronting the professor over his beliefs.

“There was an individual who had been stalking me and harassing me for the past 10 months when the fall semester started and who wasn’t a regular student, just a member of the community,” Rosenstein said. “I showed up for the first day of one of my classes, and there the person was, sitting in the classroom.”

After failed attempts to remove the individual from his class, Rosenstein proposed to the Senate a resolution that would allow professors to prevent students with a history of trolling behavior from enrolling in their classes.

“There should be a policy that can deal with a situation like this, and clearly there isn’t, so to prevent other faculty in the future from having to go through this same situation, I tried to create a proposal to address it,” Rosenstein said.

However, Rosenstein’s initial proposal was not approved out of concerns that students’ rights to free speech could come under contention.

“How much can a student say in a discussion before a professor decides he’s being offended?” said Bettina Francis, chair of the Senate’s executive committee and associate professor in LAS. “We assume for people we know and, like, that they wouldn’t do that, but you can’t set up a rule or regulation based on what you hope people will do. It has to be based on what they might do.”

In response, Rosenstein said it’s easy to find the line between free speech and harassment.

Rosenstein also pointed out the resolution was intended to be employed in only extreme cases like his, and it was unrealistic to assume professors would begin conducting a mass exodus of dissenting students from classrooms across the University.

“For a reality check, I’m in my 19th year as a full-time faculty member, and there aren’t too many other faculty members who have been so involved in controversial political issues, and in 19 years this situation has happened exactly once to me,” Rosenstein said. “It’s ridiculous to think that suddenly, professors are going to be banning scores of students and scouring through the internet to see if they disagree with them politically.”

The substitute legislation, titled “The Resolution to Publicize University Policy Regarding Disruptive Students” was passed by the Senate on Feb. 4 after a lengthy debate and amendment process.

Senate member and law professor Robin Kar said the new resolution leaves little to no risk of infringing on students’ free speech rights because it merely examines and refines current measures addressing disruptions in the classroom.

“The resolution collects the resources already available to deal with in-class disruptions and threats to physical safety and puts them all in one easily accessible place for professors to be able to use as a resource,” Kar said. “So far as I know, none of these existing resources has raised any concerns for student free speech.”

Kar said the original proposal sought to address issues relating to in-class student disruptions, threats to professor safety and new threats to academic freedom from online communication, but in reality, the University addressing such broad and varied issues with one proposal would be too difficult.

“The resolution that was recently passed tried only to address the first two issues by collecting the resources available and asking for a review by several committees to ensure that there are no gaps in existing policies,” Kar said. “But the committee ended up thinking that the third topic is complex enough that a task force with special expertise will likely be needed to examine and consider this new class of potential problems.”

However, Rosenstein said the current resolution does almost nothing to combat serious harassment against professors and other senate members underestimated the risk he was put in by having his harasser enrolled in a course.

“So far, nothing has happened that addresses that situation,” Rosenstein said. “Based on the conversations that I’ve heard around my original proposal, my overall thought was that there was not at all an understanding of the situation that I was talking about.”

“My suspicion is that the University will have to devote more resources to this problem in the future because of the expansion of social media and the cultural fragmentation that has resulted from it,” Leicht said.

Bruce Rosenstock, Senate member and professor in LAS, said one emerging threat to academic freedom and professors’ security the current resolution doesn’t address is the appearance of blacklisting sites that act as a flashpoint for trolling attacks by “exposing” faculty with controversial beliefs to the public.

“Turning Point USA, for example, has a list of professors called the ‘Professor Watchlist’ that blacklists professors judged by the organization to not be appropriately patriotic, to be threats to students because of what they consider radical agendas,” Rosenstock said. “They have a ‘Faculty of the Month’ that they send out, and that, in effect, is inviting social media to attack that faculty member and many others.”

“What I would want to do is to have the University state very clearly that that kind of blacklisting activity is not in conformity with the values of academic freedom, freedom of speech and tolerance that the University cherishes,” Rosenstock said. “Anything short of a public rebuke by our administration is frankly too weak.”