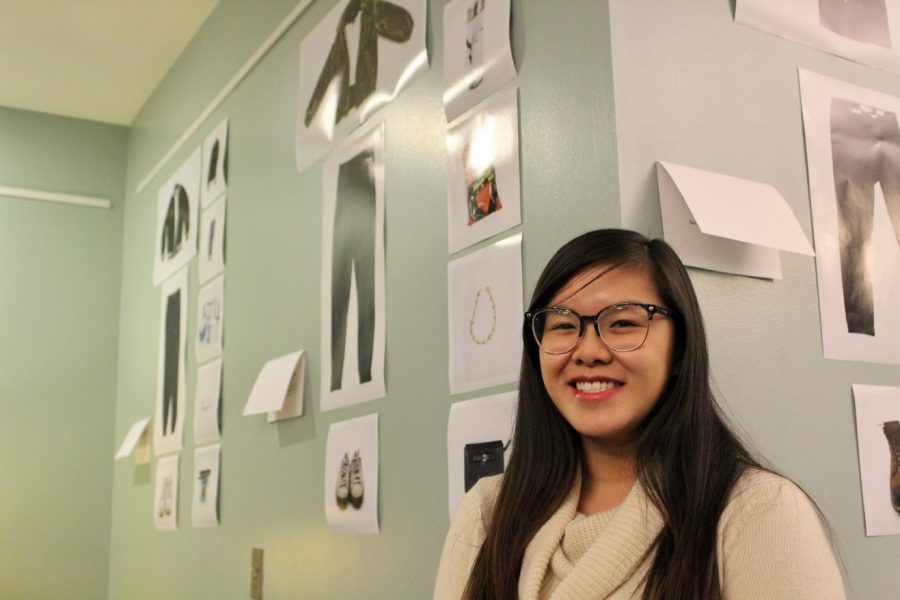 Artist Tiffany Mei, a senior in Advertising, stands in front of her exhibit “Can You Judge an Asian by its Cover?” at the Asian American Cultural Center at 1210 W. Nevada St., Urbana. The exhibit focuses on the similarities and differences between Asian International students and Asian American students and the divide that exists between the two groups.

An art exhibition hosted by the Asian American Cultural Center is challenging its audience to answer the question, “Can you judge an Asian by its cover?”

The exhibition is demonstrating a series of photographs by Tiffany Mei, senior in Media and creator of the art exhibit.

Mei said in an email that she wants to unpack stereotypes against Asian-American and Asian international students regarding clothing, social trends and many other topics.

“I think Asians know that we’re different, but usually if you’re not Asian, most people group us all as one and don’t acknowledge that there’s a difference in both culture and values,” Mei said. “I want to challenge people on how well they can judge another person, but also reflect on how they came to these conclusions and what it says about themselves.”

Photographs of items belonging to four Asian-Americans and five Asian international students will be on display as an interactive element for the audience to guess who these items belong to.

“Putting it all together, you get a glimpse of each person through their objects and even without seeing the actual person, you can form certain ideas about them,” Mei said.

Christina Carpio, assistant director at the Asian-American Cultural Center, said in an email the exhibition will engage the audience to think about the different assumptions made, and how and why the assumptions are made.

After the idea was rejected by her classmates for a group project, Mei came to Carpio with the project to shed light on on the Asian-American and Asian international student community.

“Many times, they are grouped together as just Asians without any thought to the differences in culture and experiences both groups have. I think it’s important to give students opportunities to share their experiences related to their identity through art,” Carpio said. “These art exhibits give them a voice and a platform to express themselves creatively.”

Mei said she hopes the exhibit will help people become more aware of their own perceptions of others and think twice about judging someone based on their appearances.

“Everyone has a story, you just have to take the first step of getting to know it,” Mei said.