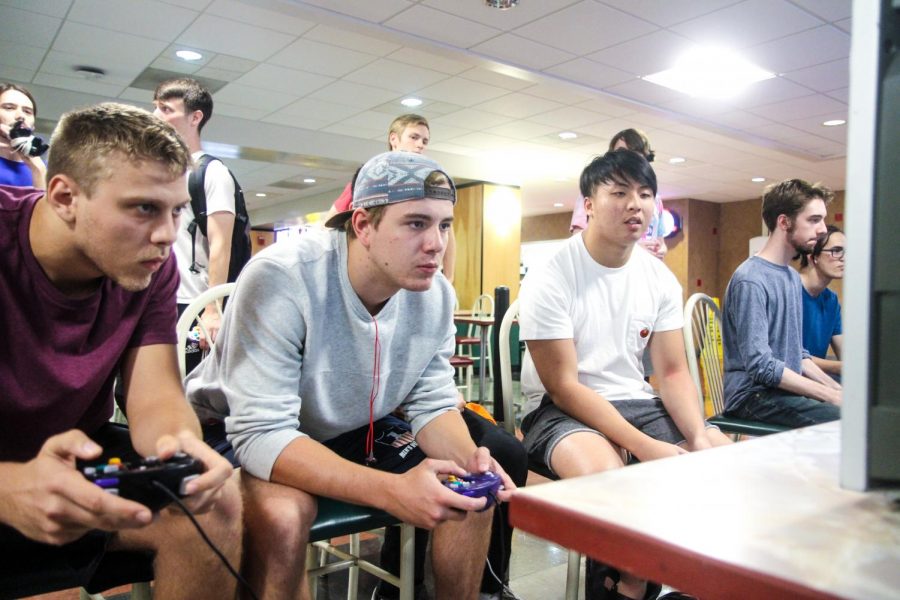 Students Wesley Blodig, Kyle Biedron and Bernard Chan play Super Smash Brothers Melee for the Nintendo Gamecube in the basement of the Illini Union on Oct. 5.

The Smashing Illini is hosting the House of Paign gaming tournament, following the release for the popular fighting game Super Smash Bros. Ultimate on Dec. 8.

The crossover game allows for gamers to compete with familiar fictional characters from other popular games.

“The House of Paign 20” is the 20th tournament of the series and will be hosted March 2 in the Illini Union ballroom. Prices to participate for this event will range from $5-$20. The event will also offer free snacks and Red Bull to those who attend.

“The House of Paign series is largely an event that’s meant to host a lot of people from around the region, and it’s a time for people to play together both in a competitive and casual setting. It also involves a lot of events for different competitive games such as Super Smash Bros. Ultimate,” said Joshua Sanchez, junior in Engineering and treasurer of Smashing Illini.

To pay back fees for when they rent out venues, the organization charges attendees at the door for their big events, such as the House of Paign or Show Me Your Moves.

“A lot of the funds that come from this event are from the existing support of the community. So when we run these events, we collect venue fees to pay for the cost of the venue, like renting out the Illini ballroom or the Rec Room for example,” Sanchez said.

Ever since the release of Super Smash Bros. Ultimate, gamers, including Chavez, have been enjoying the new installments after the new additions were upgraded within the game.

“There’s kind of a refinement of the appeal to every audience to play the game traditionally. In terms of the competitive side, a lot of the game has been balanced around very fast and interactive play that the series hasn’t seen in a long time. The games feel more enjoyable to play. The last few installments of the game have felt slow and not as engaging,” Sanchez said.

Enrique Carvajal, sophomore in Engineering and tournament organizer, said he is not nervous when it comes to planning the event, but he hopes everything will go smoothly.

“My only concern is things running late pretty much, but usually, they don’t. Even if it happens, people have fun at the end of the day,” Carvajal said.

Blake Ball, senior in Business and Smashing Illini president, is in charge of creating events such as House of Paign and is currently putting together a staff to run the organization before he graduates.

“We have a very good framework in place which takes a lot of the legwork out of these events. We generally start planning and announcing the event two months in advance, although the date is reserved a year in advance. The primary work is reaching out to top players to fly them out, and then advertising to the surrounding communities,” Ball said in an email.

Enrique expects about 100 to 120 people to attend the event since it is considered one of the best tournaments in the Midwest. Gamers from different states, such as Indiana, drive down to Urbana-Champaign for the tournament.

“It’s just a fun game to play no matter what game skill level you’re at. If you haven’t touched a controller before, the game still finds ways to make it enjoyable for you,” Chavez said.