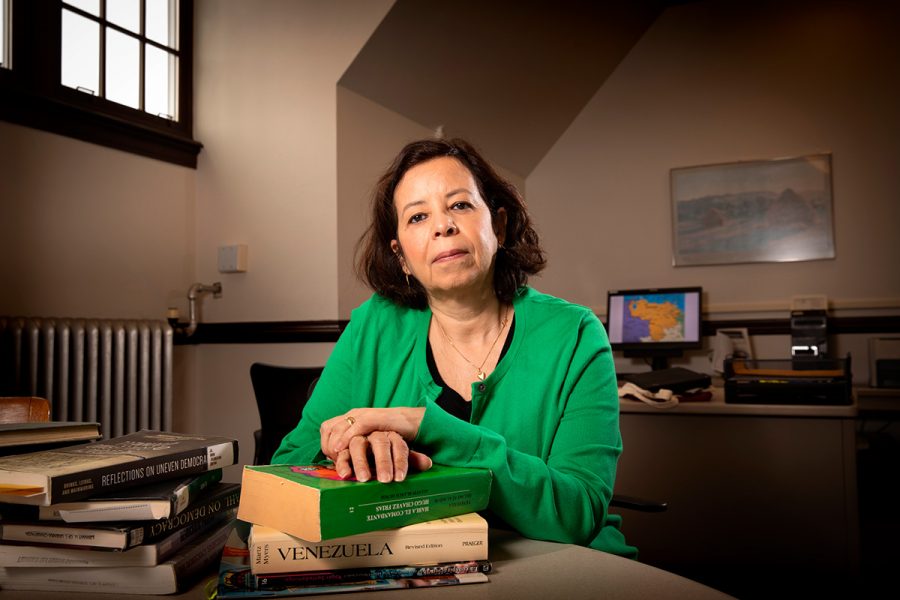 Her book on Venezuela came out in 2002, she has been apart of the University since 2005

On Jan. 23, Venezuela gained a second president. Juan Guaidó declared himself interim president through the country’s constitution after almost two weeks of mass protests against the start of Nicolás Maduro’s second term as president.

Isabella Perez, an exchange student from Venezuela and junior in LAS, said if there’s one thing a student should know about Venezuela, it’s the humanitarian crisis in the country.

“We have a really serious humanitarian crisis, that’s the biggest problem to me,” she said. “A lot of people in pain and no resources to help them get through the night without starving, so I think that is the most serious.”

She also said that even for individuals who are working two jobs, they will not have enough money to pay for food; and for individuals suffering from disease such as hepatitis and diabetes, there is no medicine to alleviate their conditions.

Damarys Canache, a professor in LAS who studies Latin America and Venezuela, explained what made Maduro’s election illegitimate and why there is so much protest against his inauguration.

According to Canache, Maduro changed the date of the election to be in May and banned the opposing political parties from participating in the election.

“There were no international observers, the elections didn’t have any of the standards to be considered a fair and free election and at the time of the election, the Organization of American States, the United States and the European Union, said the elections were fraudulent and not legitimate,” Cancahe said.

The reason Guaidó was able to declare himself the president, according to Canache, is a clause in the Venezuelan constitution. This allows for the President of the Congress of the National Assembly to declare themself interim president if there is no legitimate president and preside over an election of a new president.

Though this may explain why Venezuela currently has two presidents, there is more Venezuelan history necessary to understand how it came to be that Maduro even needed to hold a faux election in the first place.

First, there is Hugo Chávez. His appeal to the lower classes and to Socialist policies in the late ‘90s lead him to be elected president, and stay in power until his death in 2013. Canache said Maduro was an appointee of Chávez, but he was not able to gain the same kind of support Chávez did.

Canache explained how Maduro lacked the charisma that made Chávez so popular. Alongside this, a drop in oil prices, bad policies and corruption within the government, Maduro had no support among the Venezuelan population.

A drastic decrease in the price of oil led to a loss of support from the people. As Canache explained, 80 to 90 percent of Venezuela’s economy comes from the oil industry and the decrease in oil prices also leads to a decrease in government spending. While the oil prices were high, the government was able to fund social policies that kept them popular; but with the lack of oil money, there was no funding going toward the people.

After the oil prices dropped in 2014, you couldn’t even buy a cheap coffee or ice cream with 500 Bolivares (equivalent to less that $1 in 2019), Perez said. It just got worse and worse.

“In 2014, the government had serious problems because they had less currency because oil prices had a sharp drop. During Chávez, for a long time, the prices were high and even reached $100 a barrel of oil, which was very high,” Canache said.

Perez said that even though there is a chance for change in Venezuela, nobody knows what the end result will be. She mentioned how the military’s power could keep Maduro in power and this stops people from getting involved in politics.

“I would say everybody is scared, I don’t feel that anybody thinks ‘I don’t care about going out at night’ without being scared. Everyone’s scared. Which doesn’t mean that everyone is being robbed or a victim of violence; in my close friends not everyone has been robbed or kidnapped, maybe two or three in a group of eight,” said Perez.