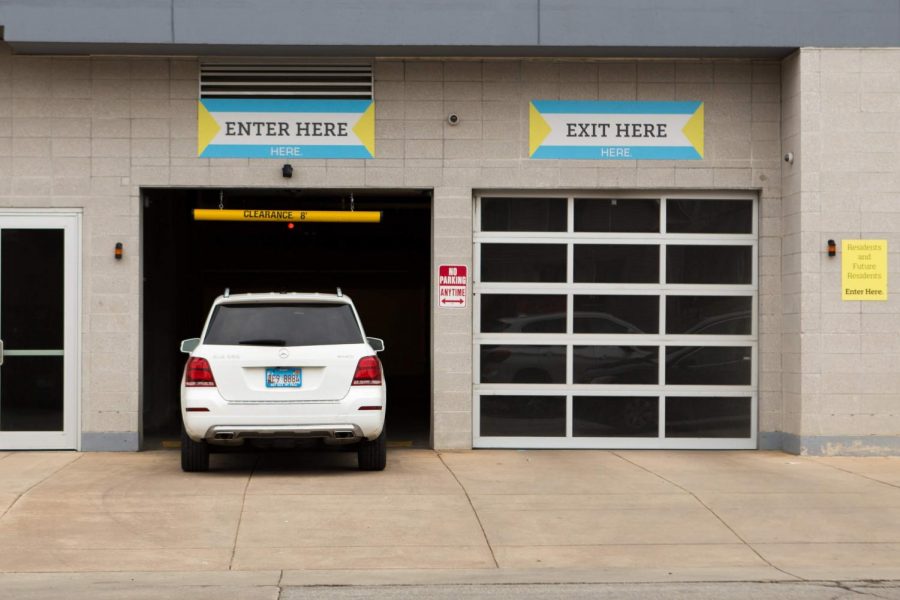 A car entering into the HERE. Apartment’s parking garage on Feb. 21.

Residents of the HERE Apartments, located on Green Street, have been experiencing problems with the garage elevators, which break down and make it difficult or even impossible for residents’ cars to leave the multi-floor parking garage.

In order to park on one of the upper floors of the parking structure, residents need to drive their cars into elevators to gain access. They also need to use the elevator to come back down.

HERE had advertised valet parking for their residents for the whole year – an intriguing offer that enticed current resident Emilee Rietveld, senior in LAS, to sign a parking agreement with the apartment complex. To Rietveld’s surprise, when she arrived at school, she was informed that the service had been discontinued.

“I didn’t realize that I would have to be (parking) myself until after I moved in, after my lease was signed, when I got to school the beginning of the first semester,” Rietveld said. “I am paying as much as I would have if I had a valet service as I am right now without.”

Rietveld’s assigned parking spot was small and various structural hindrances make it very difficult for her to park or back out herself. Because of this, Rietveld had to pay extra to upgrade her parking to a higher floor, which meant she had to use the elevators to get there.

“The elevator takes a while just to get in and out of so it adds a lot of time to my commute as it is, so when they’re not working properly it backs everything up then we have double the cars using one elevator,” Rietveld said. “I have been late to work because of that.”

Adrienne Umbarger, property manager at HERE Champaign said in an email that the choice to remove valet parking was made to make parking more convenient and self-sufficient for the residents to use.

“By removing valet services, residents can conveniently come and go as they please,” Umbarger said.

Apart from the inconvenience of the slow elevators, Rietveld said there have been multiple occasions when both available garage elevators were not functioning properly, making it impossible for anyone to get their car out of the building.

“It was down for a couple of hours and I had to go to work, so I was just glad it was back up and running by the time I left otherwise I would have had to uber to work.”

Rietveld said the malfunction happens at least once or twice a week and the residents are not informed why the elevators are not functioning.

Residents of the apartments were notified with an email from Umbarger that both of the parking elevators were unavailable due to maintenance needed on Feb. 13.

However, regional manager Courtney Colegrove was apparently unaware of the unavailability.

“We have only had one report of a mechanical issue back in August that was resolved within the hour,” Colegrove said in an email. “We have not been made aware of any additional issues nor have daily operations been affected by any additional issues with the parking garage since that incident.”

In a follow-up email, Umbarger said that they performed preventative maintenance on the elevators on Feb. 13. Staff members were on call in case a car needed to be brought down at the time.

“For clarity, the elevators were not available for self-servicing use, however, they were still operational with our staff’s assistance,” Umbarger said. “It is standard procedure to have a plan in place at all times if one elevator is out of service temporarily or both elevators are being temporarily serviced so that vehicles can still be retrieved.”

Umbarger said that the incident on Feb. 13 had no relation the issue reported back in August, nor was it related to a mechanical issue with either elevator.

The unpredictability of the parking garage elevators poses many problems for its residents and makes commuting difficult.

“It can be very frustrating on my end, with the amount I’m paying to park there and live there,” Rietveld said.