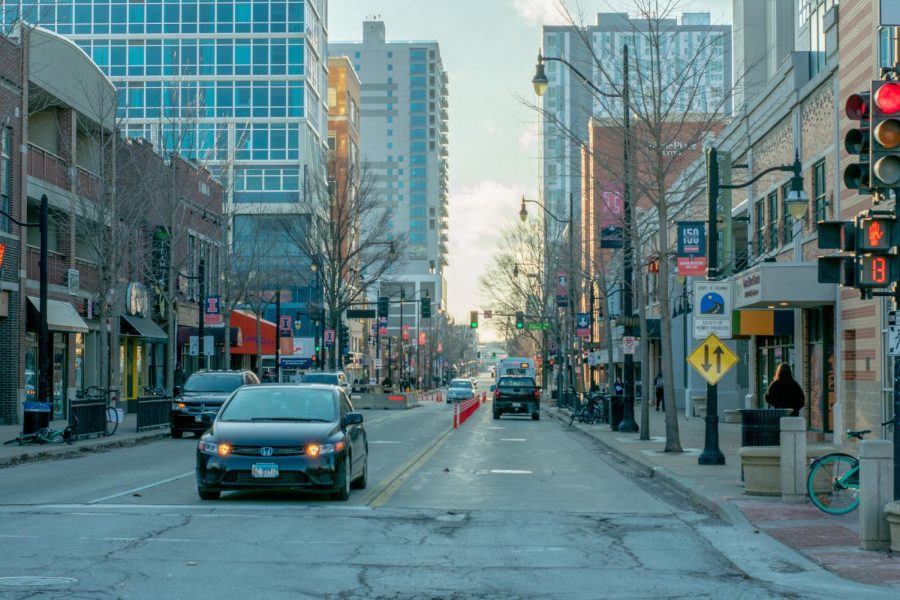 Traffic passes through at Wright and Green streets on Feb. 24.

While the cold winter in Illinois is on its way out, the lasting negative effect could stay with us for a while.

The frigid temperatures this winter have brought hazardous driving conditions, caused by damages such as potholes and cracks to the roads of Champaign-Urbana. These determinants can cause severe problems for drivers as they attempt to maneuver the roads.

Jose Rivera-Perez, graduate student in Engineering, attributes the creation of potholes to temperature and moisture conditions.

“Water has some chemical properties that when it gets mixed with asphalt, the asphalt debonds from the aggregate,” he said. “Especially since we’ve got such low temperatures here in Illinois, the asphalt gets more brittle and combines with water, and that’s going to completely damage the asphalt.”

Kevin Burke, executive vice president of the Illinois Asphalt Pavement Association, also attested to the impact of water and temperature on the asphalt pavement.

“Any time you have a significant freeze that causes stress on material, materials expand and contract as the material changes,” Burke said. “Water that has gotten underneath the pavement, that expansion and contraction can obviously do significant damage.”

Burke said if the roads are not upheld over the years through maintenance and water has gotten into the pavement, then the water will expand and begin to break the pavement up.

Imad Al-Qadi, director of the Illinois Center for Transportation, compared the asphalt pavements to a complex system designed for failure.

“We have designed the pavement to stay for 20 to 30 years, so we have it designed for a specific period of time,” he said.

Al-Qadi believes conducting a drainage system can contribute to the prevention of potholes.

The Illinois Center for Transportation is responsible for conducting all research pertaining to transportation. In total, over 300 researchers are committed to this research, with 400 graduate students, and over the past 11 years, they have worked on over 250 projects.

The center also works closely with the Illinois Department of Transportation as it conducts its studies. The center is currently developing a test which will potentially be used by the IDOT in testing the longevity of asphalt material.

Burke said the roads in Illinois are capable of withstanding the cold.

“If properly constructed and maintained, they will perform,” Burke said. “What we just need to do is make sure that we are keeping the water out of the pavements, but they can be designed and constructed and built with no problems with the roads performing.”

Correction: A previous version of this article states that the asphalt debunks from the aggregate. The Daily Illini regrets this error.