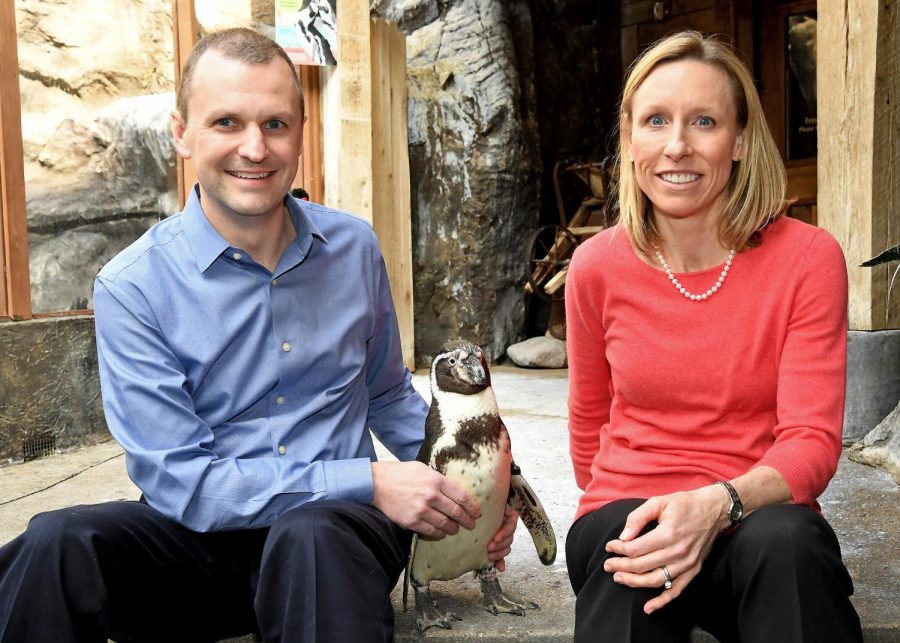 Mike Adkesson and Jen Langan sit with a Humboldt penguin named Pepe, who resides in Brookfield Zoo’s Living Coast habitat. The UI alumni are working to save the penguins.

During a trip to Punta San Juan, Peru, in 2007, two University Veterinary Medicine graduates were immediately charmed by the resilient, unabashed nature of the Humboldt penguins. In the last 11 years, they continue to return to the cliff-side habitat to help preserve these flightless birds.

Mike Adkesson and Jen Langan only planned on performing a few health assessments during their first visit in 2007, but that quickly turned in to what would be a decade-long effort to help these charismatic birds.

“They’re incredibly hardy, they’re very fit animals. So they are a tremendous joy to watch in their natural setting, both the way they can swim through 6-foot waves and bounce down cliffs, and how hardy they are to be able to thrive in an environment that’s rather harsh at times,” Langan said.

Despite the species’ toughness and its ability to withstand the rough rocky terrain of coastal Peru, researchers found the penguin population has decreased due to several environmental vulnerabilities.

Numerous El Niño events warmed the penguins’ chilly Humboldt current, which depleted their anchovy prey, along with direct hunting of the penguins, invasive coastal development and unregulated exportation of their nesting guano, which is their excrement. These events have caused the penguins to be at risk for endangerment.

The two Illinois veterinarians worked tirelessly to assess the health of the penguins, discovering significant disease and toxin exposure. Langan and Adkesson’s contributions to the site continued their lifelong commitments to animal care.

“I can’t imagine a time where I didn’t want to work with free-ranging wildlife or a zoo or aquarium setting. There was always a fascination for all species great and small,” Langan said.

Adkesson volunteered at Decatur’s Scovill Zoo while he was in elementary school. Today, he oversees all operations of the Brookfield Zoo in Chicago as vice president of clinical medicine. Langan is one of four clinical veterinarians at Brookfield and is Illinois’ first clinical professor of Zoological Medicine.

Although Langan and Adkesson are driving forces in the Humboldt penguin conservation effort, other members are paramount to their success.

Two biologists are the “eyes and ears of the program,” monitoring the reproduction and death rates, physical measurements, nesting and overall health of the penguins, Adkesson said. Teams of volunteers and Peruvian undergraduate students fill in the gaps, educating the community on the importance of conservation and clearing garbage out of the penguins’ ocean space.

“They can’t believe (researchers) flew all the way from Chicago to their small local community to work with this species and that (we) care that much about it. I think it helps them step back and look at it in a different light and understand the importance of conservation action,” Adkesson said.

Adkesson said researchers and veterinarians hope to fully pass on penguin monitoring duties to citizens in Peru. They also hope the values of animal conservation and environmental protection continue to transmit through the Humboldt penguins.

“They’re an incredibly inquisitive and charismatic animal that really inspires people to a sense of joy, but also hopefully to better appreciate wildlife and nature,” Langan said.